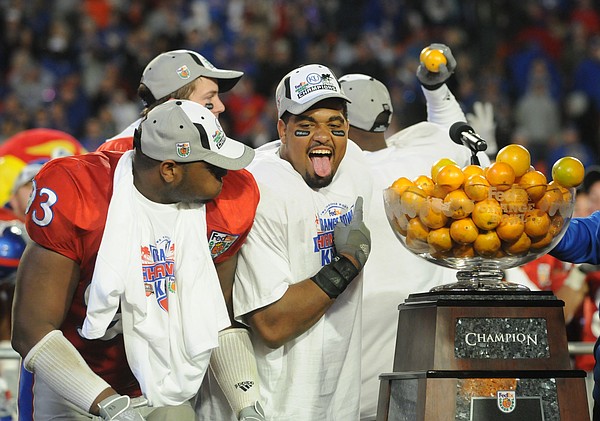 Kansas University running back Brandon McAnderson hams it up for the cameras with defensive end James McClinton after KU's 24-21 victory Thursday at the Orange Bowl in Miami. by Nick Krug

While waiting for the 2020 college football season to kick off, three veteran football writers at ESPN recently drafted their favorite college seasons in history — and Kansas was a factor in two of them.

Naturally, one of those mentions on the 15-season draft by Bill Connelly, Ivan Maisel and Mark Schlabach is the 2007 season, in which the Jayhawks earned an Orange Bowl victory. The other one was from a season more than half a century ago.

Maisel picked the 2007 season at No. 2 in the first round, and part of his reasoning was “all the chaos” the season included. For example, LSU, under current Kansas coach Les Miles, became the first two-loss team to win it all that season. Beyond that, though, Maisel pointed out that 13 top-five teams lost to unranked foes, and he made special note of the fact that Kansas went to the Orange Bowl, Illinois went to the Rose Bowl and Hawaii was in the Sugar Bowl. None of those three programs has had anything close to that kind of success since the wild 2007 season.

Maisel also pointed out that the 2007 season was Nick Saban’s first at Alabama, Chip Kelly’s first at Oregon and the year that Oklahoma State coach Mike Gundy turned 40.

The other Kansas mention in the five-round draft came at the top of the third round, when Connelly chose the 1960 season with his third pick.

That was the year that KU chose to play running back Bert Coan in its win over then-No. 1 Missouri, which had reached the top of the national polls for the first time in history. Coan eventually was declared ineligible by the Big Eight Conference, but the Jayhawks, believing they had done nothing wrong, played him anyway.

Kansas defeated Missouri 23-7 that afternoon, handing the Tigers their only loss of the season. But a couple of weeks later, the loss was removed from Missouri’s record because of Coan's ineligibility. The Tigers went on to win the Orange Bowl and finished the season 11-0, but they wound up ranked fifth in the final AP poll. Minnesota, with two losses, was named college football’s national champion.

The Coan controversy continued for as long as the Border War lingered, with each school claiming a different record in the overall series because of the outcome of that game.

Even though the Kansas football program is mired in as tough a decade as any Power Five football program has ever had, there are plenty of names and achievements in the program's history that still rank as relevant on the national stage, and the fact that these veteran college football writers found two of them to be factors in their all-time draft is a good reminder of that.

With that in mind, let’s take a quick look at my picks for the five best seasons in KU football history:

1 – 2007 – These Jayhawks set plenty of records and won their last game of the season on the biggest stage in college football, which gives them a solid claim to the top spot on the list. Todd Reesing owns every major passing record in KU history. Dezmon Briscoe and Kerry Meier are at the top of all of the program’s receiving records. KU finished second in the nation in scoring and 12th nationally in total defense. Beyond that, the 2007 team roared to an 11-0 start and reached No. 2 in the polls before losing to No. 3 Missouri at Arrowhead Stadium. MU’s loss to Oklahoma in the Big 12 title game the following week opened the door for the Jayhawks to earn a BCS bowl berth, and Kansas made the most of it by knocking off Virginia Tech in the Orange Bowl and finishing the season at 12-1. In the final AP poll, KU ranked No. 7, and it earned one first-place vote. KU also had two first-team All-Americans: Anthony Collins and Aqib Talib.

2 – 1968 – Pepper Rodgers' tough and talented squad made it to the 1969 Orange Bowl, where it lost to Penn State in the infamous 12-men-on-the-field game. KU finished 9-2 overall that season — 6-1 in Big Eight Conference play — and was ranked No. 7 in the final Associated Press poll. KU climbed all the way to No. 3 in the rankings at one point, and the Jayhawks featured one of the nation’s most potent offenses, led by tailback John Riggins and quarterback Bobby Douglass.

3 – 1960 – Even with the Coan controversy swirling, the Jayhawks finished the 1960 season at 7-2-1 overall and 6-0-1 in Big Eight play, led by All-American quarterback John Hadl. Their only losses were to No. 2 Syracuse and No. 1 Iowa, both on the road. KU finished 21st nationally in points per game (21.9) and 24th in points allowed (8.9 per game). KU's record would have been good enough for a Big Eight crown, but the conference stripped the Jayhawks of their final two victories of the season (over Missouri and Colorado) and handed the Tigers the Big Eight title instead.

4 – 1995 – Led by quarterback Mark Williams and tailbacks June Henley, L.T. Levine and Eric Vann, the 1995 Jayhawks were one of the season's surprise teams, finishing 10-2 with an Aloha Bowl victory and a No. 9 final ranking in The Associated Press poll. KU ranked 31st nationally in points per game (28.8) and 42nd defensively in points allowed per game (21.8), and the Jayhawks played the 34th-toughest schedule in the country. The Jayhawks started the season 7-0 before losing at No. 14 Kansas State and to No. 1 Nebraska in a three-week span down the stretch. KU racked up wins over No. 4 Colorado and No. 15 Oklahoma — both on the road — during that 7-0 start.

5 – 1961 – Behind future NFL stars John Hadl (KU’s first two-time All-American) and Curtis McClinton, the Jayhawks entered the season ranked No. 8 in the preseason polls and finished it with a 33-7 rout of Rice in the Bluebonnet Bowl. The Jayhawks could have finished even higher had it not been for their struggles early on. After dropping a one-point game to TCU — then of the Southwestern Conference — in the season opener, KU tied Wyoming and lost at Colorado by a point to start the season 0-2-1. From there, the Jayhawks won seven of their final eight games to finish 7-3-1 — six of those wins came in one long streak that included games at Nebraska and at Oklahoma. KU finished 15th in the final UPI Coaches Poll.

I think my favorite football win that I ever witnessed is probably the defeat of Missouri the following year. I thoroughly enjoyed the 76 we laid on NU in 2007 for sure, and the victory over OU in 1992 was terrific (was on the field as part of the cheer squad).

But that last minute win on 4th and long over MU, and the tears of sadness splashed across the face of MU fans was nourishment to my soul.

It's hard to imagine that not being on a Top 5 or Top 10 KU games of all-time list. That 3-year stretch featured some amazing KU-MU moments.

I was equally excited by the 2005 win over the Tigers. Aqib Talib ripping the ball out of Brad Smith's hands, the complete dismantling of Smith's game a week after he had riddled Nebraska, the Rock Chalk chant at basketball decibels in Memorial Stadium. And, of course, that was the year we ended "that damn streak" against the Huskers! 2005 was the year I started to believe!

The 1960 game was before my time but I would love to have witnessed this particular border war. It was the Big 8 and not the NCAA that ruled on Bert Coan's eligibility. It required a 6-2 vote from member schools to rule him ineligible and aside from KU's dissenting vote only one other school sided with us. At that time the national title was awarded after the regular season and was not affected by the outcome of the bowls. Mizzou was ranked one in both the AP and UPI polls and since this was the last game of the season, a win would have secured a national title for them. Playing Coan may have cost us a conference title but it cost Missouri a national title so it was TOTALLY worth it. And it was played in Columbia which makes it all the sweeter.

According to the way I've always heard it, and what I've read, the rule at the time was that a 6-2 vote (at least) was needed in all eligibility cases, but before the vote took place, the conference voted to change that requirement to a simple majority (5-3), clearing the way for Coan to be deemed ineligible.

KU and two other schools (K-State and Oklahoma State) voted for Coan to be eligible, but the 5-3 vote in favor of ineligibility sealed his fate.

Check out the story Ryan Wood wrote for us several years back (linked in the story above) and be sure to read the section labeled "Taking It Back."

So they changed the policy mid-season. That seems totally fair and reasonable and no one should cast suspicion on whatever took place during that process.

Imagine, K-State siding with us. Things must have been different then.