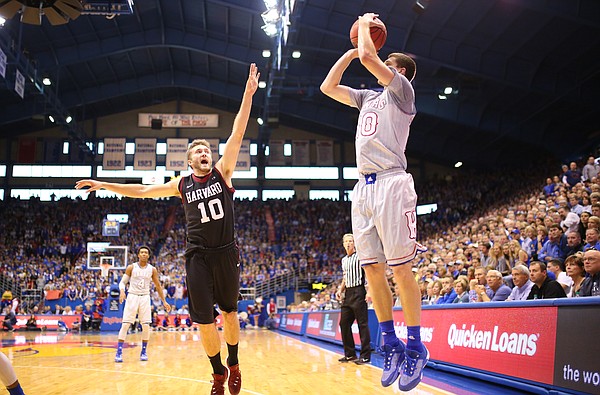 Kansas guard Sviatoslav Mykhailiuk (10) pulls up from the corner for three against Harvard guard Patrick Steeves (10) during the first half, Saturday, Dec. 5, 2015 at Allen Fieldhouse. by Nick Krug

The University of Kansas may soon be facing its first scheduling conflict from the COVID-19 pandemic.

According to reports, the Ivy League decided on Wednesday that all of its fall sports seasons had been canceled and that the league’s winter sports seasons would not begin until after Jan. 1.

The Associated Press reported that the league left open the possibility of moving some seasons to the spring if the outbreak is better controlled by then.

That decision could impact the Kansas men’s basketball program, which is slated to welcome Ivy League program Harvard to Allen Fieldhouse for a nonconference basketball game on Dec. 29.

Although Wednesday’s news certainly indicates that the KU-Harvard game could be affected, it has not been called off.

If it is, KU would have several options and likely would seek to fill the date, perhaps with a program from nearby to help promote the regional scheduling practices that many believe could be in high demand as a result of the pandemic.

“We are aware of today’s decision by the Ivy League," a KU spokesperson told the Journal-World on Wednesday evening. "However, as of right now, there have been no changes to our 2020-21 nonconference schedule.”

The Kansas Athletics website currently only lists updated 2020-21 schedules for the men’s basketball and football programs. All other schedules on the site still reflect the 2019-20 results, so it is not yet known if any other Ivy League programs were slated to face the Jayhawks this fall or winter.

Beyond individual scheduling contracts, the Ivy League’s decision is significant because of its potential to create a domino effect throughout college athletics.

In March, the Ivy League was the first conference to cancel its postseason men’s basketball tournament and the rest of the country soon followed.

It’s worth noting that the Ivy League football programs are not major players in college football’s television ratings.

CBS Sports college insider Jon Rothstein reported that the league would provide its winter sports programs with an update on practice schedules sometime in mid-July.

There’s still a lot to be sorted out and a long way to go before anyone knows whether schools like KU will have fall and winter sports seasons as currently scheduled or if they, too, will be altered or canceled.

And while the Ivy League’s news is significant, it does not necessarily mean the same fate is headed for the Big 12.

What does that mean for KU football??

The Ivy League schools are all a bunch of leftist hotbeds who have churned out Marx-Leninists bent on transforming this country from a free republic into a totalitarian state. America would be better off without them.

America would be better off without them. Please encourage them to leave!

I'm glad this is a political forum and not a kansas sports forum, I was nervous for a second there. phew!

Trump is from an Ivy League school. Unfortunately he is hell bent on transforming this country from a free republic to a banana republic.

The Big 12 or even the Basketball Coaches Association better take a lead roll in determining how season will unfold and what athlete/coach protection protocols will be implemented. If you wait for the worthless NCAA to take the lead there will be no football or basketball season or playoffs to watch. They will force non power 5 schools/conferences to shut down sports due to uncertainty of schedule and inability to fund their programs.