Morris twins play their parts in NBA's restart in Orlando 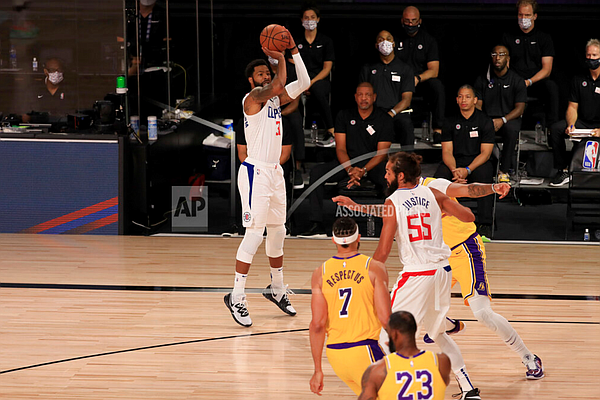 Marcus Morris played the most minutes. But Markieff Morris got the victory.

The NBA is back and opening night of the league’s restart in Orlando on Thursday featured a matchup of former Jayhawks in the second game of a doubleheader on TNT.

While players named LeBron James, Anthony Davis, Kawhi Leonard and Paul George may have gained more of the national attention, it was the Morris twins who Jayhawk fans were likely watching.

You had to be paying attention at just the right time to catch Markieff’s time on the court. The newest Lakers reserve played just three minutes and did not record a single stat in his team’s 103-101 victory.

That may change as things progress and Markieff gets more familiar with the Lakers’ system, personnel and coaching staff. But, at least right now, it looks as if he’s plugged in as quality insurance behind big men Javale McGee, who started and played 11 minutes, and Dwight Howard, who played 13 minutes off the bench.

Remember, the Lakers do still have Davis and James, who both can play multiple front court positions.

Marcus Morris, however, appears to be a bigger part of the Clippers’ puzzle. He started Thursday night and played 19 minutes while being one of just two Clippers players with a double-digit, positive plus/minus number (+10).

Foul trouble played some role in Marcus logging just 19 minutes, (he even recorded the first technical foul of the NBA's restart late in the first half) but he also was playing just his 13th game with the Clippers, so there’s still a bit of a feeling-out process going on there, as well.

Marcus missed all four shots he attempted — including an 0-of-3 clip from 3-point range — and grabbed three rebounds, dished one assist and turned it over twice in the loss.

Three more former Jayhawks will jump back into action today, when Josh Jackson and the Memphis Grizzlies face Portland at 3 p.m. (NBA TV), Cheick Diallo and the Phoenix Suns take on the Washington Wizards at 3 p.m. (no TV) and Ben McLemore and Houston square off with Dallas at 8 p.m. on ESPN.