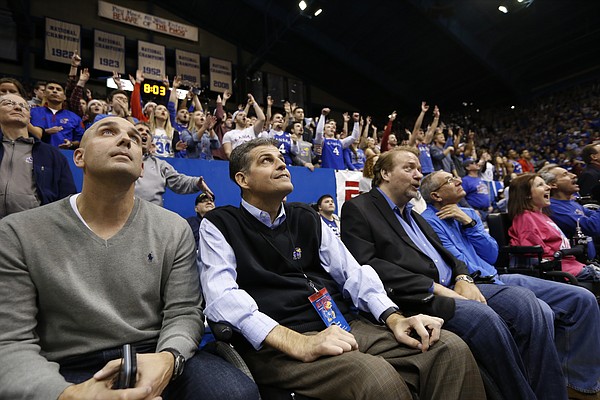 Scott Ward, University of Kansas associate athletic director for academic and career counseling, second from left, watches with longtime friend Mike Evers, left, as the starting lineups are introduced in his first game back after heart surgery on Tuesday, Jan. 3, 2017 at Allen Fieldhouse. by Nick Krug

After more than 30 years of facing and defeating serious health issues, popular KU academic advisor Scott “Scooter” Ward is headed for another one next month.

And this time, his friends are asking for help.

Ward’s college roommate and best friend, Mike Evers, reported on a new GoFundMe page created Wednesday that Ward has decided to visit the Minneapolis Mayo Clinic in August to seek a solution for a skin condition that has plagued him since 2017.

Evers said the wounds on Ward’s body already have led to two surgeries and the use of a specialty wound VAC machine to treat the condition. And Ward has endured them while still living an active and productive life despite the spinal cord injury he suffered in 1986 and two serious health scares involving his heart and kidneys in 2016 and 2018.

Evers detailed most of Ward’s medical issues and more on the GoFundMe page.

He plans to drive Ward to the Mayo Clinic because that provides a safer means of travel in COVID-19 times, and expects that, after surgery, follow-up care and at least six weeks of recovery time, Ward will be away from home and confined to his hospital bed until sometime this fall.

The GoFundMe page which is seeking $100,000 to help Ward and his wife Robin with medical expenses, is something Evers knows Ward would never have asked for on his own.

“Scooter wouldn’t want me to do this,” Evers wrote. “It’s going to make him feel so uncomfortable, but with all sincerity, I know he would do it for me.”

At that pace, it’s not hard to envision Ward’s supporters blowing the goal out of the water before he even leaves town.

Known throughout the KU athletic community as one of the kindest and most talented people in the department, Ward has impacted hundreds Jayhawks throughout his time at KU.

Many of them took to social media on Thursday to share the GoFundMe page and offer their love and support for Ward, who has been described by those who know him as one of the most positive and universally well-liked people on the planet.

Wrote Evers on the GoFundMe page: “He literally changes people’s lives for the better every day with a body full of organs that have tried to quit on him. He is a selfless Superman.”

Said former KU volleyball standout Bri Riley: “Doesn’t get better than this guy. A real “unicorn” with the world’s biggest heart. Please check out the link to read his incredible story and keep him in your prayers. Love ya always Scoot!”

Added former KU track star and current KU director of traditions Candace Dunback: “Scooter is most definitely one of a kind. He has helped so many athletes take their performances from one level to the next and I am among them. Funny thing about his influence is that you end up learning more about yourself as a person, than an athlete. Please consider supporting. By supporting one, know that you are supporting many.”

Former KU basketball walk-on Matt Kleinmann added: “Scooter is one of the toughest, nicest and most caring people I know. Each Senior Night, it’s Scooter that players thank for their education. He won’t ask for it, but he could probably use a little care in return right now.”

Those are just three examples of the outpouring of love for the man who has spent decades living up to every bit of his title — Associate Athletics Director for student-athlete development.

Best of Luck with your latest challenge. Keep fighting the good fight.

This has been the most exciting and uplifting story of the last couple of weeks. I donated, and I hope everyone else who regularly comments on these posts does as well. What an inspiration Scooter is.