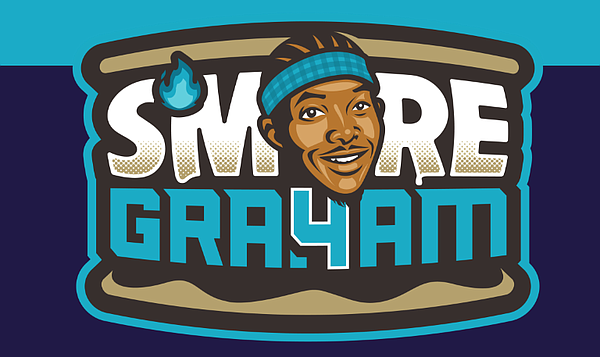 An image from Charlotte's SmoreGraham campaign for Devonte' Graham. by Matt Tait

The Charlotte Hornets have come up with a unique way to conjure up support for Devonte’ Graham’s candidacy for the NBA’s Most Improved Player award.

The Hornets recently sent out a mailer to voters called “S’More Graham,” which included graham crackers, mini Hershey chocolate bars, marshmallows and all of the information one might need to vote for Graham for this year’s MIP award.

Each of the items featured a cartoon image of Graham or his head on them and the space reserved for nutritional information on the side of the box instead had Graham’s stats from his rookie season and the 2019-20 season, which clearly showed massive improvement across the board.

The campaign to get Graham the award even includes its own website — www.smoregraham.com — with all of the facts and figures from Graham’s second season, testimonial from media members and NBA coaches and highlights from Graham’s breakout season.

The site even includes an infomercial-style video that automatically loads when you visit, with one of the Hornets’ hype men touting the season’s most exciting recipe.

There’s no debating that Graham had a fantastic season and is worthy of consideration for the annual honor. Many of the projections I’ve seen from those who cover the league do not indicate that he’s going to win it.

But if he doesn’t, it won’t be because of a lack of support from the franchise for which he now stars.

Here are a few of the comments from NBA coaches, and one NBA player, who praised Graham’s play this season.

“They’re putting the ball in his hands and allowing him to be the go-to guy. He’s putting points on the board. He has really deep range, as far as his shot and his ability, being crafty and getting to the free throw line. That’s a challenge because you have to get up on him but he knows how to draw the foul and create contact and get to the free throw line.”

“What a steal for Charlotte to get a kid that’s a proven winner and has played at an elite level pretty much his whole career.”

“Obviously the shooting is really, really good, but I like his compete level. I think he is a very aggressive player on both ends of the floor. Obviously he has speed, but the shooting, I don’t know whether he was watching Kemba (Walker) or where that came from, but he’s tough in that pick-and-roll. If you don’t go over, he’ll make you pay.”

“I’ve always been such a huge fan of Devonte’. The one thing that always stood out to me was his pace from day one. When he stepped in the building, he had great pace and poise. That’s a skill. He’s able to use it now to really get his shots off, which he’s shooting the ball amongst the best. It’s really fun to watch. I got a chance to be around him and see the work that he put in and the hard work is paying off.”

None by Darren Rovell