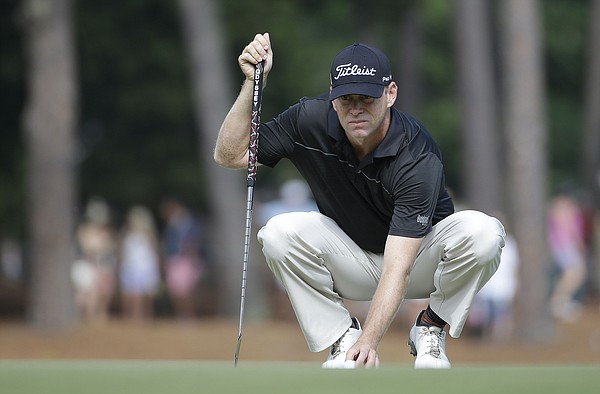 Chris Thompson lines up a putts on the 12th hole during the second round of the U.S. Open golf tournament in Pinehurst, N.C., Friday, June 13, 2014. (AP Photo/David Goldman) by David Goldman

Thompson was tied for 23rd at the completion of his round, with several other golfers still on the course.

Thompson, who recently completed his first full season on the PGA Tour in 2018-19, made his way into this week's field of golf's top mini-tour by finishing in the top three at a Monday qualifier in Springfield.

He carried over that momentum into Round 1, birdieing two of the first three holes he played on Thursday to shoot 34 on his first nine. Thompson started his round on the course's back nine.

He temporarily moved to 4-under for the day with an eagle at No. 1 (his 10th hole of the day), but carded two more bogeys and one more birdie the rest of the round to finish at -3.

Thompson will look to keep his run going in Round 2 on Friday. He'll need to finish in the Top 25 to advance to next week.

Gary Woodland, another former KU golf standout and the reigning U.S. Open champion, is not in this week's field at the 3M Open on the PGA Tour.

Nice round, Chris. Tear it up in round 2.