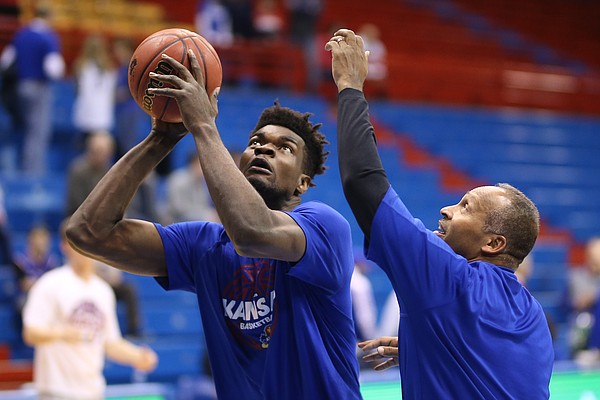 University of Kansas men’s basketball assistant Norm Roberts recently landed on a short list of the top aides in the Big 12 Conference.

Roberts ranked fourth on the list that was recently released by Stadium’s Jeff Goodman, who has covered college basketball on the national level for several years.

According to the report, Goodman’s latest series for the website involved him polling at least 20 college coaches —primarily assistants — and asking them to name the top assistant coaches in their league or conference.

Roberts was praised for his approach and experience in basketball and beyond.

“Norm is a professional in every aspect of coaching,” one anonymous Big 12 assistant told Goodman. “From player development to scouting to how he interacts with other coaches. (To) top it off, he is a terrific husband and father. I have the utmost respect for who he is and how he does his job.”

Set to begin his 10th season as an assistant to KU coach Bill Self at Kansas, Roberts’ history with Self goes far beyond Lawrence.

He worked for Self at both Oral Roberts (1995-97) and Tulsa (1997-2000) when the Hall of Fame head coach was just getting his start. And he followed him to Illinois, where he helped Self rebuild the Illini program from 2000-03 before the job came open at Kansas.

Following his time at St. John’s, Roberts worked for one year at Florida under then-Gators coach Billy Donovan before returning to Self’s staff for the 2012-13 season.

Florida adavnced to the 2012 Elite Eight during Roberts’ one season with the program.

Roberts has worn many hats during his time at KU, from holding the title of recruiting coordinator and coaching the big men to filling in for Self on his “Hawk Talk” radio show and serving as an associate head coach in many aspects because of his past experience of leading his own program.

“Norm is a pro,” Self told Goodman. “He has experiences few assistants have had.”

Self also praised Roberts’ love of the game, calling him “a basketball junkie” and saying that his passion for hoops has helped KU immeasurably during his 10 years with the program.

“His eye for talent that fits us here at Kansas is superb,” Self told Goodman. “And his first impression he makes is always tremendous.”

Self went on to call Roberts and fellow KU assistants Kurtis Townsend and Jerrance Howard, “the foundation to our success.”

Tang has been with Baylor head coach Scott Drew since 2003 and was promoted to associate head coach in 2017. According to Goodman, Drew calls him a coach without a weakness and views him as “a second head coach.”

Known best for his role of coaching the Texas Tech defense, Adams is a 1979 graduate of TTU and has been connected to Red Raiders head coach Chris Beard since Beard’s time at Arkansas-Little Rock.

The former Tulane standout has been on Lon Kruger’s staff since 2016. Prior to that he made stops at Rice, McNeese State, Louisiana-Lafayette, Richmond, Centenary, James Madison and Columbia.

Longtime Bill Self assistant who has filled many roles for the Jayhawks throughout the years.

Known for his strong rapport with his players, Harrison has coached high school, junior college and Division I basketball and also spent one year as a scout with the Washington Wizards.

Now in his second stint at ISU, the veteran assistant also has spent time at Arkansas-Little Rock, Illinois State, Houston and Loyola (Chicago).

I've never quite understood how assistant coaches can be ranked. I mean how can coaches on OTHER teams know what an assistant coach is doing with HIS team?

Not that I doubt that Norm Roberts is one of the best, but I just don't understand the process.

Same here. Outside of recruiting, how do they determine who’s head coaching material? Kurtis Townsend has been an assistant for the better part of three decades. Maybe he has no interest in being a head coach. IDK, but Danny got a head coaching job after five years as an assistant.