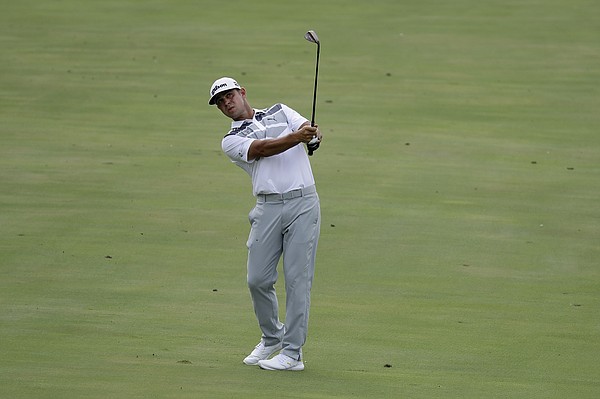 Gary Woodland hits from the 13th fairway during the first round of the Memorial golf tournament, Thursday, July 16, 2020, in Dublin, Ohio. (AP Photo/Darron Cummings) by Matt Tait

Former Kansas golfer Gary Woodland finished Round 1 at the Memorial in Dublin, Ohio, in roughly the same place he finished Round 4 at least week’s PGA Tour event at Muirfield Village Golf Course — near the top.

Woodland, who finished tied for fifth at last week’s Workday Charity Open on the same course, fired a 4-under 68 on Thursday and sits in a tie for third place heading into Friday.

Woodland played 17 holes without a bogey on Thursday but took a 5 at the par-4 18th hole to record his only blemish of the day and fall out of a first-place tie.

After carding three straight pars to open his round, Woodland birdied five of the next eight holes to soar to the top of the leaderboard.

Woodland’s hot stretch included three consecutive birdies at Nos. 9, 10 and 11. From there, he recorded six pars in a row before the bogey at 18.

The field at this week’s Memorial, which features the return of Tiger Woods (-1, tied for 19th), has been called one of the strongest groups in the history of the event. Forty-eight of the Top 50 golfers in the FedEx Cup standings are in the field and the top nine golfers in the World Golf Rankings are playing, as well.

Tony Finau (-6) and Ryan Palmer (-5) sit just above Woodland in the standings heading into Round 2.

Finau recorded nine birdies on Thursday, including four in his final five holes, and Palmer’s round featured five birdies and no bogeys.

Woodland will tee off at 6:44 a.m. Friday and will start Round 2 on the back nine.

In an interview after the round, Gary said the course had played like a major. That would be pretty awesome if he's got his game geared to challenge for more major titles.