Is Mario Chalmers angling for a reunion with LeBron James in Orlando? 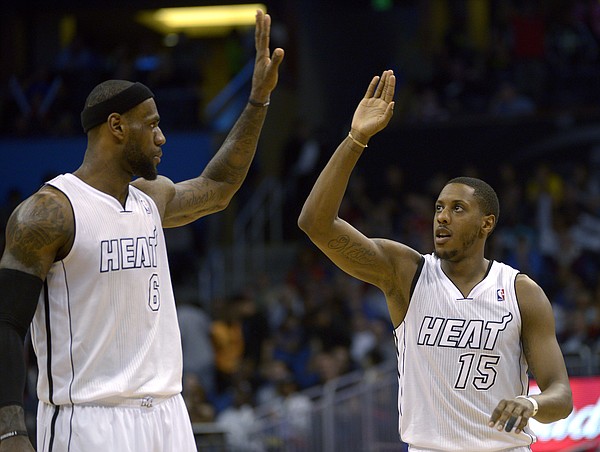 Miami Heat guard Mario Chalmers (15) is congratulated on a basket by forward LeBron James (6) during the second half of an NBA basketball game against the Orlando Magic in Orlando, Fla., Monday, March 25, 2013. The Heat won 108-94. (AP Photo/Phelan M. Ebenhack) by Matt Tait

With the Los Angeles Lakers down a couple of key guards as they prepare for the NBA’s restart later this month, former Kansas point guard Mario Chalmers has a suggestion for LeBron James and crew.

Chalmers, who won two NBA titles with James during his four seasons in Miami, hopped on Instagram on Monday to offer up his services.

“Sounds like @lakers need another pg,” wrote Chalmers in response to a Bleacher Report post about point guard Rajon Rondo’s broken right thumb that is expected to keep him out 6-8 weeks. “Been patiently waiting and working.”

The idea of Chalmers joining the roster is not entirely crazy. It just might not be easy.

According to NBA restart rules, Rondo would have to leave the bubble in Orlando on his own in order to allow the Lakers the option to pick up another player, Chalmers or otherwise.

Beyond that, Chalmers then would need to be cleared to enter the bubble, which could delay the process some, as well.

Both options are possible, though, and the past connection between Chalmers and James certainly makes the idea worth considering. After all, it was James, with help from Chalmers, who famously said in 2016 that he realized he needed a former Jayhawk to help him win a title.

James won two with Chalmers as the starting point guard in Miami and another in Cleveland with Sasha Kaun on the Cavs roster.

Although there’s no telling if the Lakers would actually consider giving Chalmers a call, the 2008 national champion has been working out and preparing for competition.

That event is a three-on-three, half-court format, but Chalmers, 34, was playing full time, and full-court, as recently as March, when he played seven games with AEK Athens in Greece.

Chalmers’ best game with Athens came in late February, when he scored 26 points in 35 minutes while adding 6 rebounds, 4 assists and 3 steals to help lead his team to victory.

Numbers like those are likely all he would need to contribute to the Lakers if he were to get the call to help replace Rondo and Avery Bradley, who recently elected to opt out of the resumption of the season.

Wow! Chalmers must really be into the whole being submissive and being dominated thing. Lebron pretty much treated him like dirt, pushed him around and showed no respect. Yet- chalmers is willing wanting to go back. he's not hurting for cash so no idea why? yea - he may have a good change at a ring- but again, at what cost?

Also, if he goes there and wins again - it will simply further the narrative that he's riding coattails.

Needless to say, i think this is a bad bad idea.

not enough words to describe how many ways I disagree.

One of the strangest comments I've read on here.

i could go on and on

When are people going to realize that LeBron James is not a nice guy. Not to mention how incredibly ignorant he is on China (or any other country, policy, etc.) and the horrible human rights record they have, but he doesn't care as long as it can make him more money.