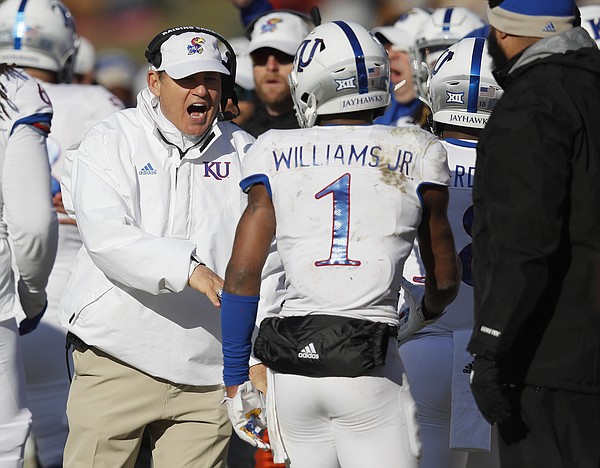 Was last year’s 3-9 record a baseline for Les Miles and the Kansas football program, and are the Jayhawks bound to make more progress in 2020? At least one national pundit seems to think so.

To be fair, Brandon Marcello of 247 Sports did not put a win total on his 2020 predicted order of finish for the Big 12 Conference, which was released early last month. But he did have the Jayhawks slated to finish in eighth place in the conference standings, at least hinting at a couple of victories in conference play.

“I just love the offense, and I think it’s going to be enough in the Big 12 to get it done and move up a few spots,” Marcello said in a recent podcast on 247’s KU site. “I’m not very high on West Virginia rebounding this year. And Texas Tech I’m still not sold on. Hey, Tech lost to Kansas last year. … I think Kansas is going to do just enough to (start) climbing the steps out of the cellar.”

So why will 2020 be different? Marcello said it comes down to a couple of key figures on the offense.

“The No. 1 reason to me was the offensive turnaround under (offensive coordinator) Brent Dearmon,” Marcello said. “That kind of gave me a little bit more 'oomph' to make this decision. Plus, I mean, I love Pooka Williams (Jr.) and what he’s been able to do.”

Both reasons seem sound. Williams has earned multiple first-team all-Big 12 honors — including a preseason nod this season — in his time with the Jayhawks. And the KU offense took a major step forward in both scoring and yards per game after Dearmon took over midway through the 2019 season.

But that was with a fifth-year quarterback who had played in 25 career games (including nine starts) heading into the 2019 season. KU does not have that in 2020. It remains to be seen if Dearmon can get the same kind of performance that he got from Carter Stanley out of any of his top candidates for the QB job this fall — true freshman Jalon Daniels and returners Miles Kendrick and Thomas MacVittie.

Between them, those three players have appeared in eight Division I football games, with MacVittie playing in three games on special teams during his time at Pitt and attempting one pass for the Jayhawks a season ago and Kendrick playing in four games last year before redshirting.

Stanley’s season, which went down as the best by any KU quarterback since Todd Reesing, was a pleasant surprise for Kansas fans. If Dearmon can get something similar out of any of this year’s quarterbacks, it will go a long way toward proving Marcello’s prediction right.

That’s a big if, though, especially considering the pandemic squashed all of spring practice and cut into KU’s summer workouts.

One key factor driving Marcello’s theory was that the Big 12 in 2020 will feature enough talented teams that they’ll beat up on each other throughout the season, preventing the conference from becoming top-heavy.

While that could lead to parity in any conference, I’m not sure it helps KU’s case for a climb this season.

It seems to me that the Jayhawks would benefit much more from having a couple of bad teams at the bottom of the Big 12 — or at least programs facing down years — in order to climb out of the cellar. Perhaps Texas Tech and West Virginia will be those teams, but both will be starting from more enviable positions than KU.

According to ESPN.com’s 2020 preseason Football Power Index rankings, all of Kansas' Big 12 foes rank in the top 50 heading into the season. The Jayhawks, meanwhile, sit at No. 104.

What’s more, KU, according to SportsBettingDime.com, has the 18th-toughest schedule in the country in 2020 and is the only Big 12 team in the top 25 of that category. Presumably, that’s because Kansas is the only program that gets to play all of those other highly ranked Big 12 schools.

Preseason rankings aren't everything, and it’s entirely possible that Kansas could use its 3-9 start under Miles as a building block for even better days ahead. But those who have followed the program for a decade or longer tend to have an "I'll believe it when I see it" mindset.

Because KU likes to hire, then fire football coaches at a rapid pace, Jayhawk fans are adept at identifying early indicators of success/failure. For example, I knew on the day that they were announced as head coaches that Gill, Weiss and Beaty would fail.

Weiss confirmed my instincts by answering a question as to how long he would be at Kansas with "five years". Beaty sealed it in his second season when he listed the entire KU roster as possible starters at the QB position, along with two football administrators, plus a tuba player from the marching Jayhawks.

My old go-to on evaluating coaches was second-season improvement. My comparatives have always been Mason, Snyder and Mangino. Three coaches who inherited bad programs, and who succeeded in turning them around.

I'm not here to make excuses for Les Miles but my old standard is harder to apply now. Snyder benefitted from playing 4 non-con games vs. non-P5 teams in his second season. Mangino inherited a better program. Mason still had a very weak KSU in the league.

Because Zenger agreed that OU needed a way to qualify for the CFP each year, he sold out his own program by agreeing to schedule another P5 game every year, even though we already played nine. But hey, that's what you get when you hire a K-Stater to run the KUAD. And now, turning around a program that Zenger/Gill/Weiss/Beaty virtually destroyed, is much harder.

The primary way those three coaches improved their programs significantly in year two was through coaching prowess. This was driven by contact with the players, coaching leadership and strategy.

Because donny-dimwit manages national emergencies worse than Weiss handled the KU roster, Miles is going to be stripped of one of the key ways he could have impacted the program - through extensive interaction with his team.

I was excited to see how Miles would move his team forward in year two. Even with a harder schedule, I was eager to see more competitive games, better on-field organization and better overall performance.

Barring a catastrophe, Miles was always going to be a 5-year hire at minimum. But now we'll really have to wait until year 3 to truly evaluate if the program is moving forward.

That is assuming, of course, that this Nov. the country decides that maybe electing a guy with 8 bankruptcies, three wives, a history of adultery, a borderline pedophile/child abuser, and a belief that disinfectant can be injected into the human body to kill a virus is maybe not the best guy to run the country. If the country doesn't pull it's collective head out, then 2021 football is at risk. Don't scoff. If this virus rages back up over the winter, and we still have captain deferment in charge, everything is in doubt.

I believe Mason was 2-6 versus Snyder. And Snyder lost to Northern Illinois his second season, so how that benefited him is hard to fathom. Finally, since you went all political, replacing Trump with an empty suit, dimwit is hardly making headway on any front unless you're a socialist.

A socialist???? Trump???? The left was trying to elect a socialist as president. Geez, I almost liked your comment until I read that. Bernie ringing a bell. I can't even believe you compared him to a socialist when the dems are pushing that agenda. I'm outta here.

Your assessment was basically a political rant about your disdain for President Trump. The office you clearly have no respect for nor anyone else's vote. He was duly elected to office and your incessant whining is getting old. I think four years of listening to the left throw a tantrum is more than long enough. I'm so tired of this far left agenda that keeps being pushed. Stay on topic. The topic is sports. Go spew your political vitriol elsewhere. I'm sure you were silent when JFK and RFK, democrats, were both sleeping Marilyn Monroe. I'm betting when LBJ, one of the promiscuous presidents and people of the modern era, was moving women in and out of his office, sometimes as many as 8-10 at a time, you were silent. I'm also certain there were crickets when Bill Clinton used the power of his office to seduce women in the oval office, of all places. So please save your morality speech for someone else.

Dude - you are one verbose opinionated guy. Got through about two paragraphs. If you need that many words to make your point, it’s clearly a stretch.