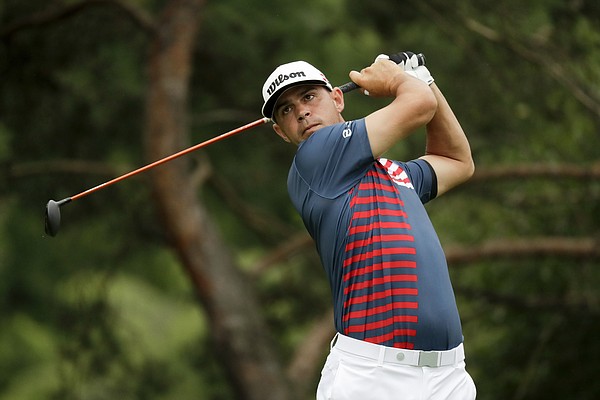 Gary Woodland hits on the second hole during the final round of the Workday Charity Open golf tournament, Sunday, July 12, 2020, in Dublin, Ohio. by AP Photo/Darron Cummings

On Friday, former University of Kansas golf standout Gary Woodland was in danger of missing the cut for a second consecutive tournament on the PGA Tour.

By early Sunday afternoon, Woodland was in the clubhouse with a Top 5 finish and one of the best weekends of his 2020 season.

Woodland followed up Saturday’s 66 in Round 3 at the Workday Charity Open in Dublin, Ohio, by firing a 3-under 69 on Sunday to move to 12-under for the tournament and into a fifth-place tie.

Although Woodland’s opening-round 73 — during which he was 3-over par at one point — put him too far behind to seriously threaten for the title on Sunday, he did not let the status of the leaders impact his round and seemed to focus only on stringing together good hole after good hole.

At the time, he was still five strokes off the lead, and, because of the great golf played by Justin Thomas and Collin Morikawa at the top of the leaderboard, he never got closer than that.

His bogey at the 18th hole was his only blemish on the back nine and left Woodland alone in fifth place with just six golfers still on the course, three of them already ahead of him in the standings.

Woodland carded five top fives in all of 2019, including a first-place finish at the U.S. Open — the first major championship won by a Jayhawk — and now has three official top fives in 2020.

This latest one came after Woodland took a week off following a missed cut at the Travelers Championship in late June.

It also marked the Topeka native’s best finish since the PGA Tour’s restart following golf’s shutdown because of the COVID-19 pandemic. Woodland finished ninth at the Charles Schwab Challenge in mid-June, which was the Tour’s first event of its restart.

Thomas, who bogeyed Nos. 16 and 18, and Morikawa both finished at -19 after 72 holes and needed a playoff to decide the champion. Morikawa took home the title on the third hole of the playoff.

Next week, the PGA Tour will stay in Dublin, Ohio, for the Memorial Tournament at Muirfield Village Golf Course, where Tiger Woods reportedly will join the field.

Great to see Gary get his game back on track. It's really cool that he's such an unabashed Jayhawk. Also, great coverage, Matt. Love the clips!