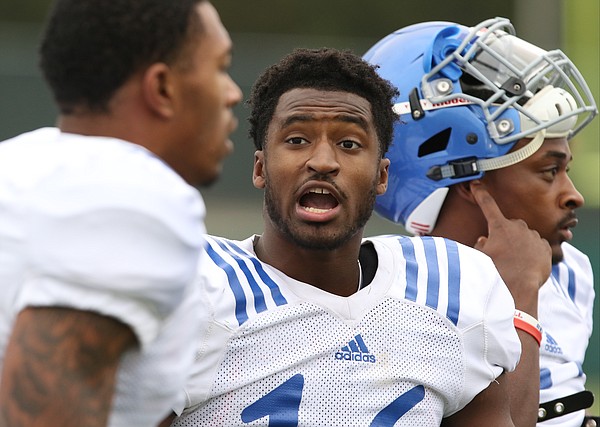 With Thursday's news that the Big Ten won't be playing nonconference games in 2020, college football players seem to be realizing that their fall season is in jeopardy — including one KU player who's asking the NCAA for help.

“Dear @NCAA, Please don’t jeopardize my last season by just playing half a season or playing only conference games," Kansas defensive back Kyle Mayberry tweeted Thursday night. "I need all of my games – every last one of them.”

The senior cornerback from Tulsa, Okla., is not alone in hoping that the powers that be in college football can find a way to play games this fall, with or without fans and with or without the current scheduling structure.

But he may have sent his message to the wrong place, as the NCAA signaled Thursday night that it's not getting involved in schools' and conferences' decisions to adjust their schedules.

“As the COVID-19 pandemic continues to impact college sports nationally, the NCAA supports its members as they make important decisions based on their specific circumstances and in the best interest of college athletes’ health and well-being,” the NCAA tweeted Thursday night.

In short, the NCAA confirmed what many people already suspected — that these decisions are being made and will continue to be made by school athletic directors and conference commissioners, not the NCAA as a governing body.

Maybe that’s the way it should be. After all, the varying circumstances from state to state regarding the pandemic make it difficult to envision a one-size-fits-all solution for college athletics during the next six months.

Mayberry’s tweet is about more than that, though. It also brings up the question of what will happen to athletes if the 2020-21 seasons are further postponed or canceled altogether.

That was addressed at the NCAA level this spring, when all spring sports athletes whose seasons were called off or cut short at the outset of the pandemic were offered another season of eligibility.

A similar move could be made in the year ahead for all 2020-21 college athletes, but it doesn't seem like decisions on that front are anywhere close to being made. We don’t know what’s going to happen, and we probably won’t have the complete picture available until sometime next spring.

Therefore, the idea of granting additional years of eligibility to college athletes — i.e. a free redshirt season for all — is something the NCAA and its members would have to work through on the fly. There does not appear to be any type of protocol already in place for how to handle such a situation.

While the idea of another year for all sounds great on the surface, you have to remember that making such a move would cost universities and athletic departments a lot of money — an additional year of tuition, books, housing, meals, training, etc. for nearly 500 student-athletes at KU.

That won’t come cheap. And worse yet, any such request would be coming as athletic departments are losing money and cutting costs rapidly in the wake of the pandemic.

Dear @NCAA ,
Please don’t jeopardize my last season by just playing half a season, or playing only conference games. I need all of my games every last one of them! Thank you.

None by Inside the NCAA

While I agree something needs to happen to take care of these athletes who could lose a season, giving them all another year of eligibility adds additional problems to be worked through. One I've not heard mentioned is what about incoming recruits? Each sport has a limit on how many scholarship athletes can be on the roster. If a roster is not reduced by completion of eligibility, how can a school bring in additional scholarship athletes, particularly those coming in from high school? Sure, a few will graduate and not return to school. Some will drop out for other reasons. But the holes to be filled will not even be close to as numerous as in normal years.

Just wondering. I'm sure there are a myriad of other problems, too.

Play if you want to, don’t play if you don’t want to. You get to keep your scholarship and programs agree to not hold it against any one who decides not to play. Letting people make their own individual decisions is always the best answer.

Dale - If the year is wiped out, as in no spring football either, they could decide to expand the rosters for a year.

Another trickier issue is for JC sophs who have zero incentive to stay another year.

My guess is this will all clear up in December.

Dirk, I hope you are right. It was not that long ago many, including me, thought it would clear up by July. At this points I have doubts about December but still hope this is over by then.