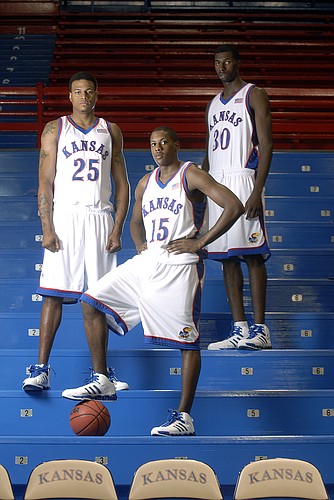 Four former Kansas basketball standouts will be among the 30 players participating in a made-for-pay-per-view basketball event in Las Vegas later this month.

KU national champions Mario Chalmers, Darnell Jackson and Brandon Rush, along with former NBA lottery pick Julian Wright, are all on different teams at the six-team, three-on-three, half-court, tournament that is scheduled to take place at Orleans Arena July 19-29.

The event, which will be played without fans in the stands, will be shown exclusively by FITE pay-per-view. Fans interested in watching can purchase a tournament pass for $69.99, which provides access to all of the games, or purchase day passes for $12.99 apiece.

The return to the court for the former Jayhawks will coincide with the NBA’s restart of the 2019-20 season.

Chalmers, 34, who enjoyed a nine-year NBA career that included two world championships in Miami, played part of the 2019-20 season in Greece before the season was cut short because of the COVID-19 pandemic.

Wright, 33, who has moved on from his playing days to start his A.D.A.P.T. basketball training academy, was the No. 13 overall pick of the New Orleans Hornets in 2007 and played four NBA seasons before continuing his career overseas.

Rush, 35, last played in the NBA with Minnesota during the 2016-17 season, which capped his nine-year NBA career. He also played in Greece for part of the 2019-20 season.

And Jackson, 34, is a former second-round pick of the Miami Heat who played parts of three NBA seasons with Cleveland, Milwaukee and Sacramento before starting his overseas career.

All four were teammates with KU from 2005-07, and Chalmers, Jackson and Rush stayed together to help KU win the national title in 2008.

All four have experience in these types of basketball exhibition showcases, and they will be competing for a $100,000 grand prize that will be split by the five members of the winning team.

Here’s a quick look at each of the rosters, which feature several recognizable names and former NBA players:

My personal rankings of the rosters heading into the event look like this:

Former NBA All-Star Tim Hardaway was involved in putting the event together and he recently sat down with Matt Striker, from FITE, to preview the tournament.

Hardaway will also be commentating part of the event for FITE.tv, along with former NBA greats Charles Oakley, Allan Houston and Matt Barnes.