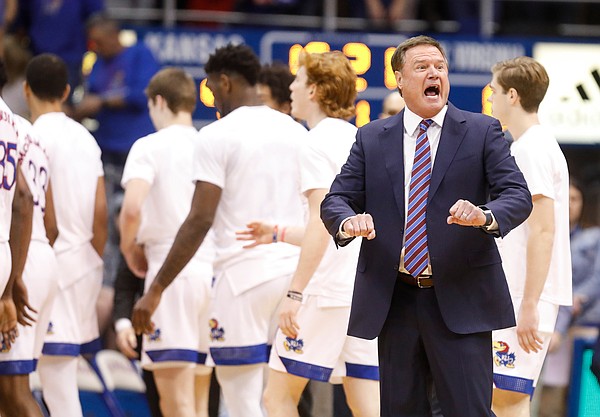 The standings show the Kansas Jayhawks at 1-0 in the Big 12 Conference race, with an early lead on five other Big 12 teams in the race to win this year’s Big 12 crown.

But that’s not quite the way KU coach Bill Self sees it.

The man who has made a career out of winning on other coaches’ home floors actually sees the Jayhawks sitting even after the first game of Big 12 play.

Let me explain, as Self did on Monday’s edition of “Hawk Talk” with Voice of the Jayhawks Brian Hanni.

The formula Self’s uses is simple. A home win is worth nothing and a home loss is worth negative-1. A road win is worth plus-1 and a road loss doesn’t hurt you.

So today, after knocking off West Virginia, 60-53 at Allen Fieldhouse last weekend, the Jayhawks are even because they won at home.

The No. 3-ranked team in the country will have a chance to move to plus-1 in Self’s eyes on Wednesday night, when they take on Iowa State at Hilton Coliseum in Ames, Iowa, where they will look to get back to their winning ways away from home after a rough run in that department last season.

“(That’s) the best way to win a league,” Self said Monday night of winning on the road. “Our road record has been so good up until last year in league play. Just winning at home’s not enough. You’ve got to go .500 or better on the road.”

Had the Jayhawks done that a season ago, their NCAA-record streak of consecutive conference titles would be alive and well at 15 in a row.

“Instead we went 3-6,” Self reminded, making even a perfect 9-0 mark at home more or less irrelevant in the league race that Kansas lost by two games to Kansas State and Texas Tech.

“Home wins, (it’s) imperative that you get them,” Self said Monday. “But road wins are the ones that actually give you a chance to separate yourself. You’ve got to split on the road at worst, and then you’ve got to win them all at home. And if you don’t do that then you’ve got to steal one somewhere.”

Given the fact that the Jayhawks will be a road favorite on Wednesday night, winning in Ames would not be considered stealing one. But since KU still can go unbeaten at home this season, the Jayhawks are not quite in the position of needing to think about stealing anything yet.

Here’s a quick look at the Big 12 standings along with where each team sits according to Self’s system.

Texas Tech 1-0 – Even after home win vs. Oklahoma State

Texas 0-1 – Even after road loss at Baylor

Iowa State 0-1 – Even after road loss at TCU

Kansas State 0-1 – Even after road loss at Oklahoma

Oklahoma State 0-2 – Minus-1 after road loss at Texas Tech and home loss vs. WVU

So the only blood drawn in the race to date came from Monday’s road win by West Virginia at Oklahoma State. Every other team did what it was “supposed to do” and now we move onto Round 2.

No. 4 Baylor gets its chance to move into plus territory tonight with a road game at No. 22 Texas Tech.

And TCU will get the same chance in Manhattan against Kansas State.

It may be a bit early to start tracking this stuff, but wins away from home — and what Self often refers to as “holding serve” at home — are the way the Big 12 will be won.

Asked the annual question about what record he thought it might take to win the conference this time around, Self, at first, gave no answer and then settled in on a record that he seemed to think might do it.