Should Marcus Garrett have been given an unusual 10th assist in recent KU win at Oklahoma State? 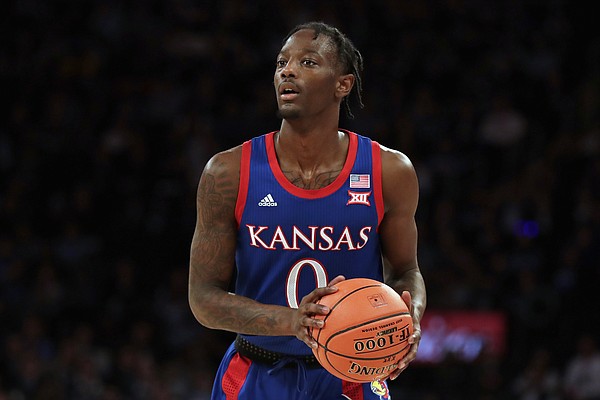 Kansas guard Marcus Garrett (0) in action against the Duke during the first half of an NCAA college basketball game Tuesday, Nov. 5, 2019, in New York. (AP Photo/Adam Hunger) by Associated Press

Kansas coach Bill Self said as much after the game, pointing out that Tristan Enaruna’s drop of a Garrett pass on a late layup attempt should have been Garrett’s 10th assist.

But there was another play, about 10 minutes earlier, that was even more assist-worthy, even if it wasn’t as obvious at the time.

Rewind to the 10:52 mark of the second half, with the Jayhawks leading 49-31, and you’ll find the start of the possession when Ochai Agbaji’s high entry pass toward Udoka Azubuike actually went too high and wound up going in to give the Jayhawks another three points and Agbaji another 3-point make and 3-point attempt.

The player who threw the pass to Agbaji was Garrett, and if the stat crew at OSU had been looking to hand out an assist on that play — and who can blame them for not looking for it? — Garrett would have been the player who got the assist since the ball, or is it "shot," wound up going in.

“Oh, yeah. They should count that (as an assist),” Agbaji said while meeting with the media on Thursday afternoon.

They didn’t. Garrett finished with a career-high 9 assists for the game. And there’s not a lot that can be done about it now.

Had the potential assist been more significant, like to complete a triple-double — there have only been two in KU history — or to set or break some kind of KU, Big 12 or college basketball record, it’s entirely likely that KU officials would have attempted to try to get the official record changed.

That’s pretty rare in college basketball these days, though. And, in many cases, it’s something that seemingly would take an act of Congress to change.

If someone wanted to go down that road, though, the official process would look like this: Someone from the KU basketball office would contact Oklahoma State and request that the box score be changed. At that point, it’s completely at the discretion of the home team’s stat crew as to whether or not they want to look into it or make any changes.

Because it can be so difficult and time consuming to go back into an official game log once the program has been closed out, most of the time these types of requests don’t end up leading to any kind of change.

But, again, had the assist been something of serious significance, KU almost certainly would have taken the necessary steps to see if they could get it changed.

As for the Agbaji pass that wound up becoming a shot, the KU sophomore did not shy away from calling himself out for the ugly break.

“It was a bad pass,” Agbaji said, grinning. “I threw it and, I don’t know, I just saw it go, it kind of got some air and went up and then banked in. I didn’t really know what was going on at the time so I ran back on defense and I saw Marcus smiling so I just started laughing.”

When told his teammates, Garrett and Christian Braun, deemed it to be a good shot in their eyes immediately after the game, Agbaji laughed.

“I mean, yeah,” he said. “I was just standing there. The defense wasn’t expecting it.”

As for whether he heard much from KU coach Bill Self about the pass/shot, Agbaji said nothing really stood out.

“Obviously that was probably one of the worst passes he’s ever seen,” Agbaji admitted. “But that’s how our night was going.”

Looking back at that Ochai Agbaji pass that turned into a shot & make, should #KUbball junior Marcus Garrett have been credited with his 10th assist for that play? More to come momentarily... pic.twitter.com/CooM063xJI

Dok didn't react like he thought it was a pass. He was getting set for the rebound, which turned out to never come. He was the closest Jayhawk, and he reacted as if it was a shot. Count the assist.

It was clearly an alley oop gone awry but was by rule a shot since it went in. That would definitely give Garrett an assist on the play since his pass to Agbaji led directly to the basket being made. The NBA gives out assist that are not near as direct as this pass was. I've seen the NBA give assist to guys who passed the ball to someone who then takes several dribbles and moves to make a basket. The NBA assist is a joke.

It’s over! Focus on Texas Tech!

Enaruna is not the only one that does not seem ready for the pass. Been saying this for a while. It's coaching staff's job to train these kids. Look at how many times McCormack, Silvio are not ready for a pass. Too many damn times. When you train them right, they will develop awareness more. They will be more than ready.

But if coach insists on those guards keep driving and forcing layups - how those guys would think they'll get a pass... If coaching staff is willing to open up a bit, ask the team to "create plays" for each other, we will watch a beautiful basketball. You will see 15-20 assists per game and higher scoring. Team will get even better OFFENSIVELY. Right now, our defense (and lucky 3s) helps us win games. But, against more athletic & pressing team, it will be a tougher challenge if we don't play as a team. Don't get me wrong, but Garrett is the only one that has that team mentality.

I challenge someone to come up with stats how many times guards forcing layups & not getting foul calls, or ending up with turnovers - we could've turned those missed layups into scores, assists, more awareness in the team.