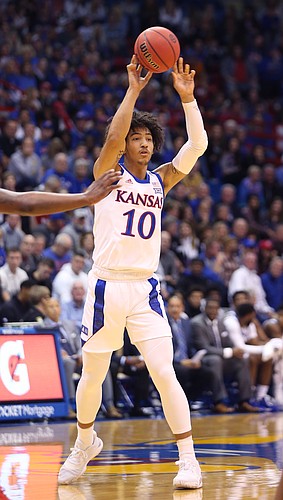 Kansas freshman Jalen Wilson recently hit a setback in his effort to return to the KU lineup.

And it had nothing to do with the broken left ankle he suffered in the second game of the season.

“We were getting ready to play Tennessee and going into that Friday he was thinking, ‘Hey, I was full speed yesterday and I'll be ready to go and I’ll show you coach that I’m ready,’” Self recalled Thursday. “And in pre-practice he hurt his back and hasn’t been able to do anything since.”

The setback, which Self classified as back spasms, is the first step in the wrong direction for Wilson, who has been on or ahead of schedule throughout his rehab and was still eyeing a return to the lineup this season.

Self and the Jayhawks still have not ruled that out. But this latest issue has brought his immediate future into question.

“We still haven’t made a decision,” Self said Thursday. “But he’s not to the point where he can practice because of his back. Every day that goes on, you know, it just delays the opportunity for him to come back.”

Self said if Wilson were “perfectly healthy” on Thursday, which he was not, it would be another 10 days before they could make a full and informed decision on whether to redshirt him or bring him back in time to contribute this season.

Ten days from now would leave KU with eight regular-season games remaining and whatever postseason games the Jayhawks play. Even if Wilson were cleared to return in 10 days, it’s hard to see him playing a big role in his first week of action.

“It’s getting close to being at the point where it's probably not worth it,” Self said Thursday. “But we’re still going to give it a little bit more time to see how it goes.”

Ranked No. 47 overall by Rivals.com in the 2019 class, Wilson committed to KU and signed with the Jayhawks last June after receiving a release from Michigan, where he had committed and signed, following former Michigan coach John Beilein leaving the Wolverines for the NBA.

Wilson picked Michigan over KU initially but said at the time that getting a second chance to sign with the Jayhawks felt a little like fate.

While Wilson’s recent back spasms certainly alter his immediate plans, Self said prior to the Tennessee game that he saw a way Wilson could fit into the current KU rotation.

“I, personally, see value it,” Self said on Jan. 20. “And he wants to come back. His parents are good with him coming back. He could potentially help our team. But I’m not going to put him out there and lose this year unless I’m confident and he’s confident that he can be part of our rotation. We’re trying to rush it, because if he is going to play you want him playing as soon as possible.”

1] Regarding Jalen, at best, you're looking at maybe 12 -14 games or 1/3 of a season. By the time he is ready the team chemistry maybe set......Red Shirt makes the most sense, so next year, along with Mitch we will definitely have bench strength.

3] What happened to all the lady posters?

I feel for Jalen I know he wants to play, but trying to come in and get some playing time may not make sense. Redshirt this year and come in the next ready to go.

I suppose it’s a compliment to be on your list but I noticed a couple of names who might also be on the most disliked list as well so I’ll take it with a grain of salt.

Hope you’re right about the Chiefs, I’m expecting it to be much closer. We need to avenge the 2014 world series.

The wisdom of Jalen redshirting or not boils down to whether or not it is certain that he'll play four years. If not, then a few weeks this season will make no difference except to give him a few games under his belt before playing next year. If he is a four year player, then these few weeks problem wouldn't be worth it.