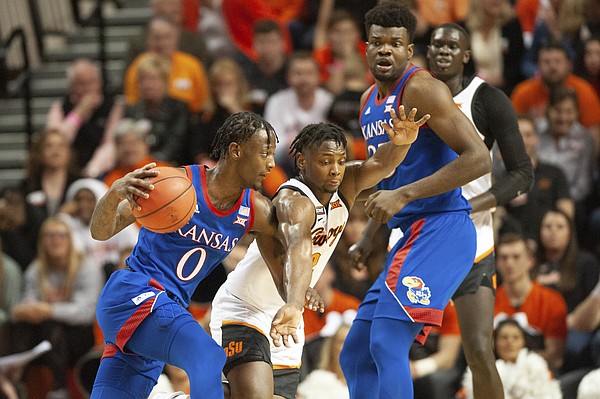 But don’t let that familiarity with Garrett’s jam-packed stat lines allow you to look past his most recent performance.

Seven points. Eight rebounds. Nine assists. All of it coming in a winning effort on Monday night at Oklahoma State.

Statistically speaking, the performance tied for the closest Garrett has come to recording the coveted triple-double where a player records double-digit numbers in three categories.

Assists and steals were not officially kept stats at KU until the 1970s, and blocked shots did not become an official NCAA statistic until the 1985-86 season.

After Monday’s game, Garrett said he found out he was close to a triple-double when he came to the bench for the final time late in the game.

According to KU coach Bill Self, Garrett should have got it.

By the time he reached the recap of Garrett’s scoring, Self was laughing. But Garrett’s importance to this team, and the KU program, is serious stuff.

“Marcus totally controlled everything,” Self said after the OSU win. “Especially the second half. He’s a really good player. He is. I don’t know if we’ve had anybody in the middle of the zone that I can remember that’s any better than he is.”

Garrett’s teammates know the Dallas junior’s talent and potential better than anyone. Numbers like those he put up on Monday at Oklahoma State have become rather routine for Garrett in their eyes.

“It doesn’t surprise me at all,” said freshman guard Christian Braun, who led Kansas with 16 points and 9 rebounds against OSU. “That’s something he does, really, every game. He’s probably the best in the country at doing that, getting rebounds and just doing little things that help your team win. He doesn’t care who scores. So those numbers don’t really surprise me at all. He does that every night.”

Through 20 games, Garrett’s 2019-20 stat line does not do justice to his importance to the Kansas lineup. But it does provide an indication of his jack-of-all-trades ability and do-whatever-it-takes mindset.

Even with him missing parts of a few games because of separate ankle injuries, Garrett is averaging 9.3 points, 4.6 assists and 4.2 rebounds in 30.6 minutes per game.

Those numbers have climbed ever so slightly to 10 points, 5.6 assists and 4.3 rebounds in 33 minutes during KU’s first seven conference games.

Garrett also ranks second on the team in steals and tied for fourth in blocked shots.

Garrett’s offensive rating numbers per KenPom.com further magnify his value. The junior combo guard who can play and defend all five positions has an average offensive rating of 110.8 through the first 20 games of the season. He has topped 100 in that area in all but six of KU’s games. And three of those sub-100 games were KU’s three losses.

Like those two before him, Garrett’s focus, each game and each possession is on competing, no matter what his numbers read or if his shots fall.

Because of that, it’s not hard to envision a triple-double being in his KU future. But you probably won’t learn about it from Garrett if he gets one.

Here’s a quick look at the five games in his KU career in which Garrett has come the closest to recording a triple-double.

Everyone talks about "if he was a better shooter" scenarios but my guess is he wouldn't be as good a defender, ball handler, rebounder, and passer if he could shoot well. I luv the way Marcus plays.

Love Garrett. He'd be an all-American if he had just an average jump shot.

Garrett is our PG, he distributes ball well, low ATO, and consistently throws almost-perfect lobs. His cross-over is getting more dangerous. I can tell he's been practicing hard. Next one is to be able to dunk again. He seems botherd by knee issue or legs or something.

He was actually going up for a dunk (which he rarely does) when he got the hard foul.

Right, thanks, I remember. He'll have to hop higher next time. That was kind of just above the rim. :)

Marcus isn't the showy player he was his senior year in high school. He can shoot jumpers and dunk with the best of them, but he has made his place on this team as the set up player for the "shooters". Often, when he takes a jump shot it's because the shot clock is winding down, or his fellow players are all covered. Occasionally, when he finds himself left open, he'll take the three point shot, but not if it's early in the shot clock. He probably has the green light to shoot threes, but his teammates are more likely expecting him to pass to them and will not be of a mindset to rebound a miss. Only if it's a set play for Marcus to shoot will his teammates be ready to rebound if necessary, so my guess is that's why he doesn't take as many jump shots. On the other hand, there is no doubt when he starts driving the lane, his fellow players know to box out and be prepared if necessary, for a lob pass.

I personally think Marcus Garrett is the most important player on this year's team. Not flashy, but truly the "glue" guy.

You make some good points, Kit, but I doubt that he has a green light to shoot threes. His low shooting numbers go beyond his stats. His form is not very good, as he usually seems to shoot it pretty flat. It would be great if he could improve that, because he's so stellar in everything else.

He doesn't seem to jump, because like Len said, he shoots low. He needs to raise his shooting arm higher, and jump to release the ball.

Kit: On the other hand, there is no doubt when he starts driving the lane, his fellow players know to box out and be prepared if necessary, for a lob pass.

Aren't we glad to finally see those dunks coming. But I haven't seen any of those lobs at close range, though, that's something Marcus can improve.

Kevin Young, Jeff Withey, Frank Mason, Marcus...our team is just littered with guys that come in with skills at a lower level and then just explode under Self's tutelage. You really see the enormous difference in playing ability for these guys who stay three or four years. Kirk Heinrich & Greg Ostertag are two examples from Roy's day...guys who weren't starters for the most part, but were reliable bench players who could come in, give some minutes, do what needed to be done and then come off the floor.

Also, it's good to see Wiggins starting to fill his stat sheets finally.

Kirk Hinrich was a starter for three and a half years. His number is hanging in Allen Field House ( the 25th to achieve that honor). Maybe you are thinking of some other reliable "bench" player?