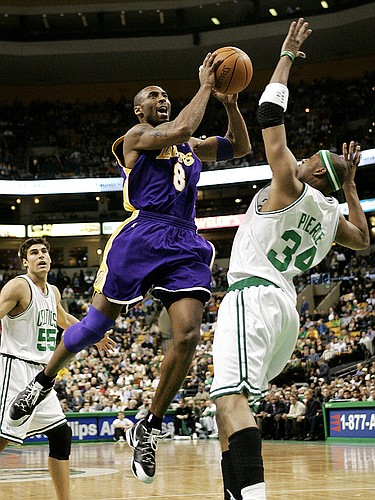 The Lakers' Kobe Bryant drives to the basket on the Boston Celtics' Paul Pierce, right. Bryant scored 43 points as the Lakers cruised past the Celtics in Boston.

Multiple reports, including one from The Associated Press and ESPN.com’s Adrian Wojnarowski, have indicated that NBA legend Kobe Bryant died in a helicopter crash on Sunday afternoon in California.

The news rocked the sports world, and people from all walks of life, and across all sports, hit social media to pay tribute to Bryant and mourn his passing.

Freshman Jalen Wilson posted a black and white photo of Bryant walking toward the basket, with the caption, “Mamba Mentality Forever... RIP.”

Bryant’s nickname and the brand he had built while conducting all of his post-basketball business endeavors was The Black Mamba.

Freshman Christian Braun, 16 hours earlier, had ReTweeted what will go down as Bryant’s final post, a congratulatory message to James sent out to his 15 million followers.

“Continuing to move the game forward @KingJames,” it began. “Much respect my brother #33644.”

The hashtag referenced James’ updated point total, which moved him one point in front of Bryant into third place on the NBA’s all-time scoring list.

Kansas coach Bill Self had not been around Bryant much, but it was clear from his reaction that Self was well aware of Bryant’s impact on basketball, both during his 20-year career and after.

“I grew up idolizing Larry (Bird) and Magic (Johnson) and our players, since I’ve been here, have grown up idolizing Kobe,” Self told the Journal-World. “Everyone respected his talent, competitive spirit and the difference he made, and was going to make, in peoples’ lives moving forward. A very sad time for so many and everyone that follows our sport.”

Former KU great and longtime Boston Celtics star Paul Pierce, who waged countless battles with Bryant during his career, simply Tweeted a emoji of a sad face, before adding in a separate Tweet, "This is not real right now."

“Man, I don’t even know where to start. I started playing ball because of KOBE after watching the 2010 Finals. I had never watched ball before that and that Finals was the turning point of my life. I WANTED TO BE LIKE KOBE. I’m so FREAKING SAD right now!!!! RIP LEGEND.”

Kobe Bryant, an 18-time NBA All-Star who won five championships during a 20-year career spent entirely with the Los Angeles Lakers, was 41. Bryant died in a helicopter crash near Calabasas, California, a source told The Associated Press. https://t.co/UgKcL1Zemh

None by The Associated Press

Kobe Bryant is among those dead in a helicopter crash outside Los Angeles, a source confirms to ESPN.

Basketball has lost a legend. The world has lost a good guy. RIP, Kobe Bryant.

I'm not normally effected by celebrity deaths but this one stings.

Whatever you do, don't read the comments on any of the articles online about this...you'll lose any faith you have left in humanity.

Kobe is a few years older than I am, but I grew up watching MJ and wanted to be like Mike. I remember in HS there were middle school and elementary school kids starting to try to emulate Kobe's game, and I thought that he was just the net flash in the pan. Like Grant Hill or the many other "next Michael Jordan's" before him.

I remember when he was accused of rape, many commentators on ESPN and around the sports world thought that his brand and his image would never recover. Boy were they wrong!

I always loved rooting against Kobe, but I also loved watching him play the game. He moved so gracefully on the floor. The skill and artistry that he played with were beautiful to watch.

He will be missed.

What hurts for me is his daughter, daughter's friend, friend's parent...other friends, just snatched away. If there's anything to be taken away that could mollify this by even a fraction, he was doing what he loved, basketball, as they were all headed to (I believe) his daughter's game. Saw a snipped of him on Jimmy Kimmel where he was recollecting a conversation w/his daughter, how he was supposed to have a son to carry on the legend and his daughter was saying, "Dad, I got this, I got this."

Don't care who you are, if you love basketball this one hurts. Doesn't matter if you rooted for him or against him, this is a massive loss for all of us who love the game of basketball.