KU-K-State brawl reminiscent of Xavier-Cincinnati melee from 2011; Will punishments be similar? 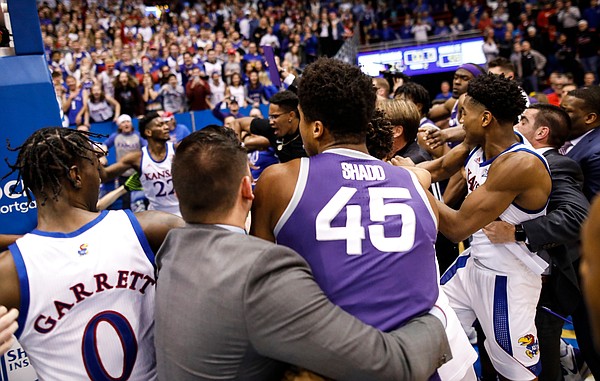 If you’re a college basketball fan and you watched Tuesday night’s 81-60 KU victory over Kansas State and the melee that followed and did not think back to the 2011 throw down between Cincinnati and Xavier, you might have missed that one.

This one, which had embattled KU junior Silvio De Sousa at its epicenter, was eerily similar to that one in so many ways, with rivals squaring off, tempers flaring out of control quickly and all of it coming after a lopsided win by the favored team.

Here’s a quick recap of what happened in that one.

With the clock winding down and Xavier — Cincinnati’s crosstown rival — leading the Bearcats by 23 points, two players got in each others’ faces and just outside of the paint on the final possession and quickly tackled each other to the floor in front of the Cincinnati bench.

From there, the entire Cincinnati team spilled onto the floor and players from the Xavier bench quickly entered the picture.

Unlike Tuesday’s brawl, which was mostly confined to a 20-30-foot space behind the south goal in the handicap seating section at Allen Fieldhouse, the Xavier-Cincinnati mess spilled to parts of the entire half of the court, with mini-fights breaking out at various points instead of one big mob of players pushing and shoving.

Most of the action in that one stayed on the court and it took about the same amount of time to regain control, with officials, coaches and staff members eventually separating the two teams.

One player, Xavier forward Kenny Frease, was clocked so hard on the left side of his head that the punch drew blood. Frease, no doubt caught up in the hysteria of everything, hopped up from the floor with a bandage on his face and raised his fists into the air toward the crowd, exposing his gash and riling up the home crowd.

Fortunately for KU and K-State, nothing quite that horrific was a part of Tuesday’s mayhem. But the image of KU forward Silvio De Sousa holding a stool high over his head certainly indicates that the two programs dodged a bullet.

But even without blood, this one was nearly just as ugly, as players from both teams temporarily lost control of their emotions following a game that was not nearly as intense on the floor for the 40 minutes that preceded the incident.

If anything, this was a fairly tame Sunflower Showdown, with No. 3 Kansas taking control early and never giving the Wildcats much hope that they could win or come back.

The game was not overly physical, there was no controversial moment or call that fanned fiery emotions and even the KU crowd was relatively tame, given the fact that the home team had control on the scoreboard for 30+ minutes.

That, like the incident at Xavier nine years ago, is what made what followed so surreal. If there’s bad blood going in or something significant happens during the game that creates a tense situation, it’s easy to see how these sorts of things can and do happen.

But this one pretty much came out of nowhere and, even worse, spilled into the stands.

As Big 12 officials and representatives from KU and K-State try to sort out the appropriate punishments for those involved in what took place on Tuesday, it’s worth looking back at the Xavier-Cincy fallout.

After all, that is the closest thing I can remember seeing that is anywhere close to what we saw on Tuesday night.

In that mess, eight players were suspended a total 30 games for their roles in the fight.

Don’t be surprised if similar or even lengthier suspensions are levied toward a handful of KU and K-State players when the Big 12 and school officials make their final rulings on this mess.

KU coach Bill Self and K-State coach Bruce Weber both said on this morning’s Big 12 teleconference that they were still in communication with the conference office about how to proceed, with Weber saying he thought something would be known sooner rather than later.

I saw the Cincinnati-Xavier fight. It was a lot more punches being thrown and like the article said many side fights started with players not in the original fight. Most of what I saw last night was pushing and shoving except for DeSousa and the KSU kid in street clothes (injured player Love I was told). Those two should get large suspensions. As for the rest of the group not so much. McCormick maybe a game or two and the same for Sloan who was the second to the scene behind Love. As for the leaving the bench before the game was over. That is a complete joke. Everybody in the stands, the coaches and players all thought the game was over but the officials in their infinite wisdom chose to review and put .1 seconds back on the clock. What a joke. If they would have called some fouls during the last two minutes when KU had the walk ons in the game maybe "cooler" heads would have prevailed but they swallowed their whistles and let what was a fairly clean game get rough.

While neither fight is acceptable it seems the UC-XU fight was far more widespread in terms of individual involved in punching.

An article on 247sports by a writer who was at our game, just the other side of the goalpost from the melee, says that de Sousa let go of the chair an instant BEFORE Jerrance Howard grabbed his arm. That says he had second thoughts and decided to not use the chair as a weapon. That does not excuse raising the chair in the first place and he could very easily decided to bash someone with it. But it should be noted that he gave up the chair willfully before using it against anyone.

Again, I'm not condoning the behavior nor am I suggesting he not be severely punished but said punishment should not include using the chair as a weapon, only using it threateningly.

Interesting that Vitale commented from another game that he had never seen anything like Tuesday. Hmmm? Maybe his memory was lost with his hair.

It’s drama par for the course with him as he also exclaimed over and over “Where are the coaches?” The coaches were all over the incident in quick order - well apparently except for Weber who said he was at center court shaking someone’s hand. Sad.