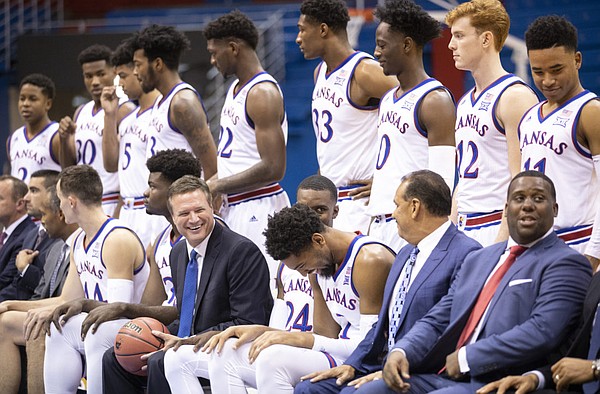 Kansas head coach Bill Self and some of the players get their laughs out before the team photo on Media Day, Wednesday, Oct. 10, 2018 at Allen Fieldhouse. by Nick Krug

Self on Thursday was asked about a recent comment made by ESPN college basketball analyst Seth Greenberg, who said on the air that he thought Self would end up leaving Kansas for San Antonio at the end of the 2019-20 season.

“My boldest prediction for 2020 is Bill Self to San Antonio,” Greenberg said during Wednesday’s appearance on ESPN’s "Get Up!"

Rumors of Self someday joining the Spurs are nothing new and have been a regular part of the KU basketball season for years.

But unlike previous reports of the Spurs being interested or Self being tied to San Antonio, this latest instance was merely one man’s prediction about what might happen.

Nonetheless, Self reacted to Greenberg’s take during Thursday’s press conference.

“Well first of all, I haven’t talked to Seth in five or six months,” Self began. "And secondly, and most importantly, I haven’t talked to (Spurs GM) R.C. (Buford) ever about (the job), and he was in my wedding and I was in his so I’ve known him pretty well and we’ve never once discussed it. And thirdly, I think it’s kind of an insult to the Spurs because they have the greatest coach maybe our sport’s potentially ever known — certainly the NBA — one of the two or three best of all time for sure. So, yeah, there was absolutely zero truth to that.”

Self went on to say that comments like those made by Greenberg “cracks me up.”

“What it was was ‘Bold predictions for 2020,’ so you just grab something or throw something against the wall and hope that something sticks,” Self said. “But, no, there’s zero truth to that. That’s not even one that would impact us positively, negatively. There’s nothing to it at all.”

What about the reports that he will be coaching the Essendon Bombers of the Australian Football League? This could be serious.

He doesn't want to move that far away from his extended family so he is taking the Dallas Dingoes job instead.

I was hoping he might move to Des Moines, opting to coach the Iowa Wolves.

A denial at this point doesn't mean much. Larry Brown denied he was leaving as well, who coincidentally left KU for the San Antonio job.