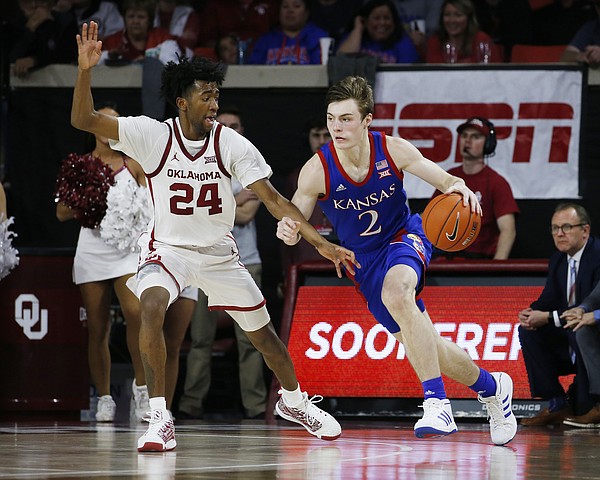 Kansas' Christian Braun (2) is defended by Oklahoma's Jamal Bieniemy (24) during the second half of an NCAA college basketball game in Norman, Okla., Tuesday, Jan. 14, 2020. (AP Photo/Garett Fisbeck) by Associated Press

Norman, Okla. — Devon Dotson may not have played in KU’s 66-52 victory over Oklahoma on Tuesday night at Lloyd Noble Center.

But that does not mean that Dotson did not play a role.

Sidelined because of a hip pointer that kept him out of parts of last Saturday’s loss to Baylor and may keep him out longer depending on how treatment and recovery go the rest of the week, Dotson found ways to impact KU’s most recent victory even while wearing street clothes on the Kansas bench.

Those were the two players who Dotson kept in contact with throughout the hard-earned, shorthanded victory, lending advice when he could, encouragement when needed and tips throughout.

“To the team, he just told us go get a win,” Braun said of Dotson’s words of encouragement after learning at Tuesday’s shoot-around that he would miss the game. “You know, every game in conference play, you just have to find a way to win.

Garrett had a little more communication with Dotson throughout the game, as he played 38 minutes, handling point guard duties for nearly all of those.

“He put confidence in us,” Garrett said of Dotson. He was just telling us before the game, ‘Just play our game. Just keep doing what we do and we can still win the game.’ On the court, he was coaching us, telling us what he was seeing on the bench. That helped out a lot.”

At halftime, the conversation between Dotson and Garrett turned more specific.

“He was basically telling me the reads off the pick and roll,” Garrett recalled.

That input no doubt helped the Jayhawks both execute and remain calm in Dotson’s absence on Tuesday night. And with no exact timeline known for his return, it should serve the Jayhawks well moving forward should Dotson have to miss any more time while his left hip heals.

“Devon’s a tough kid,” Self said. “I mean, he's a tough kid, but I guess the pain and where it is and everything and any type of movement that requires any quick-twitch or change of direction or anything like that, he hurt. He was laboring quite a bit. So we were better off playing other guys at 100% than him at 50, probably.”

Self and the Jayhawks head to Texas this weekend for a 1 p.m. Saturday showdown with the Longhorns in Austin.