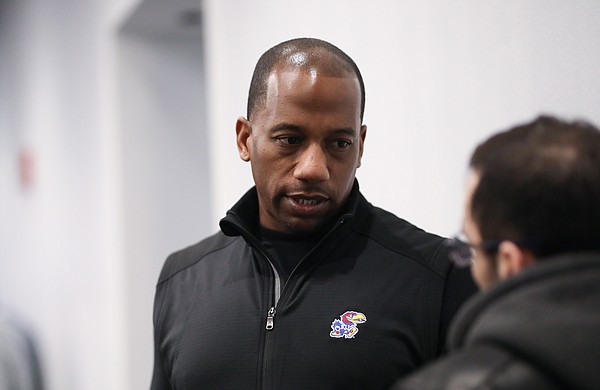 A couple of months removed from winning three games during Les Miles’ first season in charge, the Kansas football program last week picked up a key offseason victory that should be celebrated every bit as much as any of those in-season wins were.

KU’s decision to promote Emmett Jones from receivers coach to passing game coordinator last week — read: make sure he sticks around Lawrence instead of leaving for other opportunities — was by far the biggest and most important news of the offseason to date.

Keeping arguably the best assistant coach on staff and one of the top recruiters in the Big 12 Conference in town made last week a win for all kinds of reasons.

Continuity is key and Jones’ contract is also now guaranteed through the 2022 season. Jones’ recruiting skills are second-to-none. And his ability to both motivate and hold players accountable is a crucial part of the steep climb Kansas football is facing.

Clearly, the reasons Jones is so important to this program go well beyond his coaching chops. But to look past those would be a mistake.

What he got out of a largely unproven group of wide receivers during the 2019 season was rock solid. And it significantly upgraded the production of the Kansas offense.

Remember, it was Steven Sims Jr., (now killing it with the Washington Redskins) and Jeremiah Booker who had done most of the heavy lifting at the position for the three previous years, and both were gone when the 2019 season began.

Sure, there were bodies there and plenty of potential, but players like Andrew Parchment, Stephon Robinson Jr., and Kwamie Lassiter II were just that — potential. Yet Jones pulled something significant out of each one of them.

And don’t even get me started on the work he did with senior receiver Daylon Charlot. That, to me, was the biggest sign of just how talented Jones is as a coach and a human being.

In just a few months, he reached Charlot in a way that two other coaching staffs — both here and at Alabama — could not. And through equal parts love and compassion and hardcore expectations, he turned Charlot into the player Kansas fans expected to see when he transferred from Alabama in the first place.

And, remember, those numbers were recorded without the luxury of having two proven seniors, like Sims and Booker, who were both solid throughout their KU careers. They also came in Jones’ first season coaching these guys and first season under Miles.

KU’s head coach, offensive coordinator Brent Dearmon and quarterback Carter Stanley all had key roles in elevating the production in the passing game. But it was Jones who worked with the receivers day in and day out. And it was Jones who tapped into what it took to make each one of them more prepared, more aggressive football players.

He did so by connecting with them as people first and then by removing the fear of failure and replacing it with confidence and swagger.

Jones would be the first to tell you that it’s the players who deserve the credit for their production last season. They put in the time and the work required to be ready to deliver and then went out on Saturdays and did just that.

The players themselves would tell you that they could not have done it without Jones.

He just has a special way of reaching people. Whether watching film and breaking down coverages or joking around before drills or at media sessions, Jones always seems to know the temperature of the room and makes sure everyone is comfortable in his presence.

Not only that, but rare is the instance when you walk away from a conversation with Jones without having learned something of value.

Retaining him does not guarantee that Kansas will win a bunch of games next season. But trying to do that without him — both next year and into the future — would have been much more difficult.

Absolutely agree. Keeping Jones in the fold is essential and yet another sign of hope for the future of KU football.