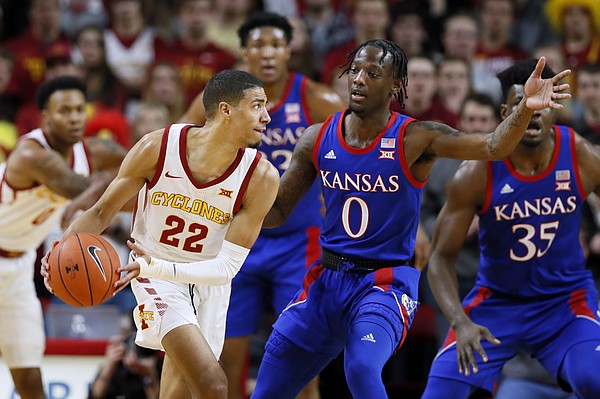 For the second time this season, the status of an injured ankle belonging to Marcus Garrett was a hot topic heading into KU's next basketball game.

And for the second time this season, it does not appear that Garrett will miss any additional time.

"It's getting better," Garrett said Friday morning of the left ankle he rolled during Wednesday's win at Iowa State. "I'll be good for tomorrow."

Tomorrow, of course, brings the third-ranked Jayhawks' Top 5 showdown with No. 4 Baylor. And because of both the low-grade severity of the injury and the magnitude of KU's next game, Kansas coach Bill Self said he fully expected Garrett to play against Baylor when the Jayhawks and Bears tipoff at noon Saturday on CBS at Allen Fieldhouse.

Asked if he thought Garrett would be 100% for the Baylor game, Self was less sure.

"I don't know; I honestly don't," he said. "We didn't practice (Thursday). We just watched tape and (had a) walk-through. So, he didn't push it at all. But I can't imagine him not getting jacked up to play and adrenaline taking over."

That was not always the case. Garrett, who said he landed on a teammate's foot which caused the ankle to fold over in the win against the Cyclones, said he was initially much more worried about the severity of the injury.

"It felt more serious than what it really was," he said.

After missing roughly 8 minutes in the first half after being examined on the bench and back in the KU locker room, Garrett returned to the game late in the first half and then played the first 10 minutes of the second half. He moved well, running, jumping and cutting without issue and helped the Jayhawks cruise to their biggest win at Iowa State since 2003.

With around 10 minutes remaining and the game well in hand, Garrett asked out of the game and did not return.

"Yeah, it started doing some crazy stuff," he said Friday. "It started getting sore so I was just asking to come out."

As for how this latest injury — to the opposite ankle — compared to the ankle injury that kept him out of the second half of KU's loss to Villanova a few weeks ago, Garrett said the two were "very different."

"The feeling at Villanova was almost like I couldn't move," he said. "This game, it felt like that but once I started moving it loosened up."

Provided Self and Garrett are correct in their assessment of the junior guard's status for Saturday, expect to see KU's most experienced player and top defender in his usual spot in the starting lineup when the Bears and Jayhawks open play.

We are so much better with Garrett in there. I hope he really is ok and doesn't hurt it by playing tomorrow.