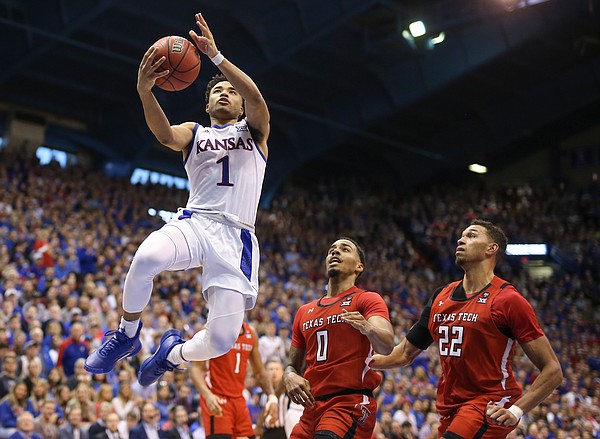 Kansas guard Devon Dotson (1) gets in for a bucket past Texas Tech guard Kyler Edwards (0) and Texas Tech forward TJ Holyfield (22) during the second half, Saturday, Feb. 1, 2020 at Allen Fieldhouse. by Nick Krug

Sophomore guard Devon Dotson on Monday was named the Big 12 player of the week for the third time this season.

Dotson’s 21-point performance in a home win over Texas Tech was the highlight of the point guard’s week and he entered this week still on top of the Big 12 Conference’s scoring leaders list at 18.2 points per game.

The Charlotte native who averaged 16 points, 4 rebounds and 3 assists last week, has scored 20 or more points in a game seven times this season.

Monday marked the fourth time this season that a Kansas player had earned the weekly award. Dotson has done it three times (Dec. 2, Dec. 16 and Feb. 3) and center Udoka Azubuike was the recipient on Jan. 27.

KU senior Isaiah Moss also has been honored by the Big 12’s weekly awards, earning newcomer of the week honors on Jan. 12.

Also on Monday, Dotson was named as one of 10 finalists for the annual Bob Cousy Award, given out to the best point guard in college basketball.