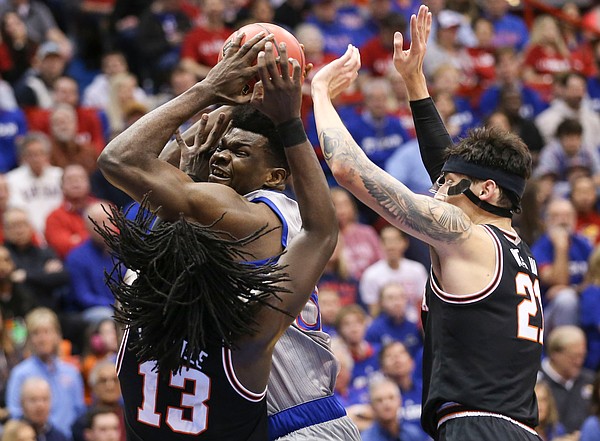 To hear his teammates tell it, Kansas senior Udoka Azubuike is on some kind of a hot streak at the moment, with five double-doubles in his last seven games and back-to-back monster showings in KU’s two most recent victories.

“I mean, he’s on a roll right now,” said sophomore guard Ochai Agbaji after Monday’s 83-58 win by No. 1 Kansas over Oklahoma State at Allen Fieldhouse.

Added freshman guard Christian Braun: “The roll he’s on right now is crazy. What he’s doing night in, night out is pretty impressive. It’s fun to watch for all of us.”

Throw OSU coach Mike Boynton into that “all of us” group, even if it comes in a losing effort.

Monday night, shortly after watching Azubuike torch the Cowboys for 19 points and 16 rebounds in 27 minutes, Boynton spent half of his postgame meeting with the media praising Azubuike.

That was after he offered one heck of an in-person compliment to Azubuike during the handshake line after the final horn sounded.

When the two met near midcourt, Boynton shook Azubuike’s massive mit with his right hand, tapped him on the chest with his left and then pointed up to the ceiling at Allen Fieldhouse.

“He kind of just said if I keep doing what I’m doing that I’m going to hang a banner at the fieldhouse,” Azubuike said.

“Hell, I’m not afraid to say it,” Boynton began. “If Udoka Azubuike is going to make all of his free throws, they’re going to win a national championship.”

That made the challenge tough from the start. But the individual performances that led to the collective beatdown spoke to Boynton even louder throughout the 40 minutes of his third crack at a win on KU’s home floor.

“Damn, they’re good,” he said after the KU victory Monday night. “One of my goals was actually to never hear that chant in this building. I was 2 for 2. So that streak’s over.” 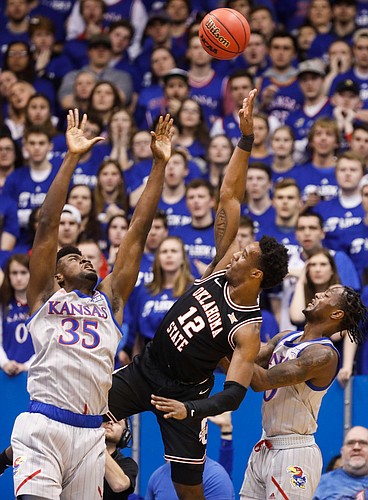 The unique thing about Boynton’s words on Monday night was that he seemed happy to share them. There was no shame in the loss, no overwhelming disappointment or frustration weighing on him.

His appreciation for what Kansas basketball is and his enjoyment of watching young men have success in the game he loves outweighed any of that.

“I cheer for these guys when we don’t compete against them,” Boynton said of the Jayhawks. “I hope they do well. We’re not a national championship contender. They are. And the reason that they are is because not only do they have (Azubuike), but they also have as dynamic of a point guard as you can have in college basketball (in Devon Dotson). But then their ancillary pieces all contribute, as well.”

Speaking specifically on Azubuike, Boynton emphasized the senior center’s four-year development and the obvious work that he has put in to position himself to have the year he is having.

“I’d be hard pressed to find a better national player of the year candidate,” Boynton said. “I mean, the way he’s playing is pretty special. … He’s truly one of the most improved players I’ve ever watched.”

And that improvement is not limited to one end of the floor or the other, nor is it something that shows up in spurts or small doses. Boynton, whose team did a better-than-average job of handling Azubuike in the first meeting in Stillwater, Okla., in late January, said the thing that has impressed him the most about Azubuike’s career is how he has shaped himself into a complete player.

“He still doesn’t have a ton of post moves, right,” Boynton said. “He’s not like (Hakeem) Olajuwon out there. But if he catches it in the paint, you don’t really have an answer for him. But what he can do defensively now versus what he could do two years ago, for sure, is night and day. He can move his feet, he can switch in ball screens and keep a guard in front of him, and then anything around the basket, he has very good reaction time, very good anticipation. And, for the most part, he does it without fouling a whole lot.”

Boynton continued: “This game is about these kids. I’ve watched his development in my time here. I saw him play a little bit in high school. And his growth is remarkable. Obviously a lot of credit goes to their staff putting him in position, but that kid has obviously put a lot of work in and he’s made himself not just a big, plodding post player who can get lost in today’s game as everyone thinks. No, the truth is if you’re good enough you can figure it out, and he’s terrific.”

Ranked No. 6 in the current KenPom.com player of the year standings — Dotson is actually No. 1 — Azubuike enters the home stretch of his senior season focused more on taking full advantage of every moment and less on individual accolades.

“I’m happy that I’m actually showing what all the hard work I put in in the offseason (has done for me) and it’s really paying off right now. I’m going to look back one day at this moment and the best thing to do is just cherish the moment.”

As for his head coach’s thoughts on Azubuike’s candidacy for national player of the year?

“Over the last (several) games, you can certainly make a case for that,” KU coach Bill Self said after Monday’s victory. “So hopefully he’ll still keep on this uptick and keep building off of it, and if that's the case and if we win then maybe he will start getting some recognition for that. I’d like for our guys to be in the game for all postseason accolades, but, you know, we still have to win three games before we should even think about that.”

Okay, so why didn't Boynton hear the chant last year? Looks like OSU won in the Phog two years ago, but lost by 12 last year. And yes, this is the thing I'm focusing on out of this article :-)

According to ESPN, we won 84-72 in Lawrence last year.

We got swept by OSU last year, but then we beat them in the B12 tourney:

Edit: Wait a minute, that was two years ago (stupid google)...

Edit2: Yeah, we swept OSU last year. Not sure what Boynton is talking about:

I heard a segment on ESPNU this afternoon talking about KU basketball. Chris Childers was questioning KU's recent success without any NBA-worthy players (Childer's beliefs). Dok's talent was criticized because of his poor shooting at mid and 3 point distsnce, a skill that is, apparently, considered essential in the pros. It was pretty clear to me that Childers has not followed KU very much. But he has a point. Dok doesn't do much from any distance from the rim. What will be need to do to achieve success beyond KU?

I don't think he can be a star (or likely even a starter) in today's NBA, but he should be able to carve out a niche for himself as a defensive replacement who can also dominate smaller players inside.

His rate of improvement is remarkable. The form of his shot has changed so much. I think he has a good chance of being a gamechanger in the NBA. Think bigger and better version of DeAndre Jordan.

Dok already has done tons to meet the development requirements of the nba scouts, and that as a 20 year old with relatively limited experience. The biggest piece of that development for him has been his ability to move and defend on the perimeter. He couldn’t do that as a sophomore. As a sophomore there was also all sorts of criticism for his inability to block shots and rebound and he’s starting to tear those up as well.

Even his FT shooting is tremendously better than it had been though the percentages hadn’t risen significantly. At least it wasn’t painful to watch anymore.

As long as he’s making 70-80% of his 2s there’s no chance he’ll be taking anything else, and maybe in the nba as well. His development so far would indicate that maybe he could develop the ability to shoot from outside as Embiid and others have.

Clearly Dok has improved substantially, but still needs to improve his footwork. He would do well to look at Luka Garza moves. The Iowa Center is one of the best I've ever seen at being able to move to the right position to make the shot.

And also, Dotson has been #1 on the kPOY ratings for a long time now. Basically biggest winshare of most successful team is what that says, but Dok is well-deserving and a complete gamechanger. Love what they're both doing. It's a goood season.