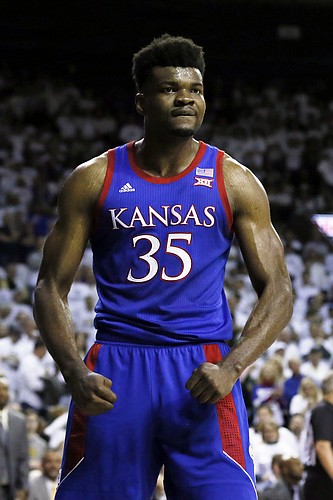 Kansas center Udoka Azubuike flexes after a dunk against Baylor during the first half of an NCAA college basketball game on Saturday, Feb. 22, 2020, in Waco, Texas. (AP Photo/Ray Carlin) by Associated Press

Most years, the postseason player of the year award in any conference is given to the best player on the best team.

On Saturday afternoon in Waco, Texas, the third-ranked Kansas Jayhawks staked their claim as the best in the Big 12 this season by avenging a January home loss to Baylor and beating the Bears on their home floor, 64-61, in a battle of top-three teams.

But even though senior center Udoka Azubuike was absolutely dominant in the Jayhawks’ latest victory — scoring 23 points and grabbing a career-high 19 rebounds in the win — Kansas coach Bill Self was not exactly ready to hand his big man the hardware with four games still to go in conference play.

“Let’s not forget about Dot,” said Self of point guard Devon Dotson in a postgame interview with radio color analyst Greg Gurley. “We’ve got two guys, I think, who have a viable case.”

While Azubuike’s numbers and impact stood out the most on Saturday, Dotson continues to put up big numbers while playing a critical role for the Jayhawks night in and night out.

On Saturday, Dotson, the Big 12’s leading scorer, finished with 13 points on 5 of 11 shooting while dishing three assists and swiping two steals.

Dotson’s final line was modest by the standard he has set for himself this season. But his impact on the game, and on the final lines of so many of his teammates — including Azubuike — tells a more complete story of Dotson’s value.

Three of the six shots he missed on Saturday were flushed back home by Azubuike, who benefited greatly from Dotson’s ability to get his shoulders past his defender and get to the rim, make or miss.

At times, when things get particularly stagnant on offense, some coaches have said that the best offense a team can run is one in which the guards get the ball on the rim and let their big men go clean up the misses.

There was a strong element of that in play on Saturday, although it was more the result of Baylor’s ferocious defense and not necessarily KU’s inability to run offense.

The Jayhawks did plenty of that, employing Self’s new wrinkle of keeping the ball in the middle of the floor to prevent Baylor’s defenders from playing strong help D on passes inside to Azubuike.

Dotson also drew four fouls — compared to six by Azubuike — and shot 2 of 3 at the free-throw line, with the two makes coming with 34 seconds to play to put Kansas up 62-55.

And then there was the workload.

“What’d he have? Two turnovers? And the ball’s in his hands all the time,” Self said after the game. “I thought he played great. The plays that he made getting to the hole there, midway through the second half, were pretty big for us.”

Dotson’s versatility is a big reason he currently leads the Big 12 in scoring at 18.2 points per game. He’s also first in free throws made, with 120. The sophomore from Charlotte, N.C., has eight 20-point games to date and is among the team and conference leaders in six other categories.

“He’s played turned up just about all year,” Self said after Saturday’s victory. “But on a day when David (McCormack) fouls out in four minutes and he’s got to play 36, that’s a lot for a guy that big. The big fella, he played today.”

This one-two punch, which Self has said is the best he’s had at Kansas, is a huge part of the reason the Jayhawks are in contention to bring the Big 12’s regular-season trophy back to Lawrence.

But on Saturday, when Azubuike and Dotson led the Jayhawks to their biggest win of the season, the one thing that fueled them and their teammates the most was pride.

There are four games remaining in the race to crown a Big 12 champion. And those four games could also decide the conference player of the year.

Who are the other candidates?

TCUs Bane and TTs Ramsey may also be in the mix

The unsung hero, Garrett, should win Most Valuable Defensive Player of the Year! He's the motor behind our team. Defense and Offense (play maker). He's our team's General!!

Garrett won’t be appreciated as much as he should be because of the lack of gaudy stats but it is true that he is the heartbeat of the team.

The way I see it those two are competing for national player of the year as well.

National awards are great but ..........but I m willing to bet they would trade all those awards for a national championship .Ask Graham or Mason what they would have enjoyed more .

I gotta say Dok over the other 2. When he is not on the floor, we lose more than when Dot or Marcus are not. Yes, we need all of them and that's our strength, we are a really good TEAM and getting better.

Part of the reason Dok is more important is because we have Dotson AND Garrett. Though very different players, aren’t they basically the only ones to initiate the O?

I agree that Dok, while not the best player on the team, is the most valuable. Though I think Dotson will ultimately win the Big XII POY. That is, unless Dok has a monster remaining four games.