An explanation for why Saturday's Kansas-Baylor showdown will still tip off at 11 a.m. 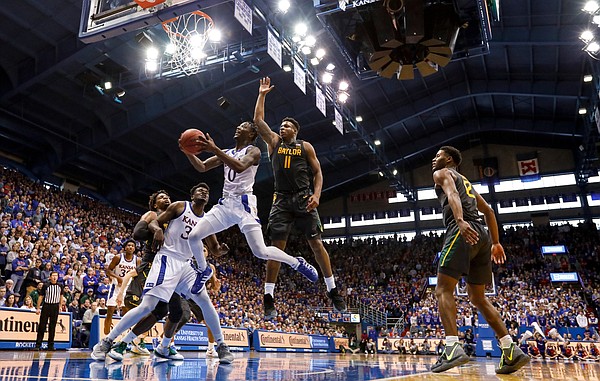 Kansas Jayhawks guard Marcus Garrett (0) gets in for a bucket past Baylor Bears guard Mark Vital (11) during the second half on Saturday, Jan. 11, 2020 at Allen Fieldhouse. by Nick Krug

The featured game on ESPN’s College GameDay on Saturday is the Big 12 Conference showdown between No. 1 Baylor and No. 3 Kansas.

And fans everywhere seem to be confused about why that game, with all of the shine and buzz of a Top 3 matchup, is still scheduled to tipoff of at 11 a.m. instead of being moved to a later time, like the 7 p.m. slot after an entire day of build up.

The reason is simple. And it has a lot to do with the new way of thinking when it comes to televising college athletic events.

See, in the past, the 7 p.m. slot was as good as it got. Prime time they called it. And everyone, everywhere, knew it.

But that was during simpler times, when not every Division I college basketball game was broadcast on some kind of network somewhere. (Sorry to those ESPN+ haters out there who just rolled your eyes or clinched your fists).

These days, with the overwhelming majority of games on television, the whole start time focus has become a relative thing. And the idea games competing against each other for ratings is one of the most important elements.

It’s also important to note that the Saturday schedule is different than weekdays. In many eyes, the earlier the better on Saturdays because the games are over before the day gets away from you and they do not conflict with dinner plans, concerts or any other out-and-about types of activities that people tend to enjoy on the weekends.

With that in mind, let’s take a look at Saturday’s slate.

There are two other 11 a.m. games featuring Top 25 teams this Saturday — No. 13 Auburn hosts Tennessee and No. 19 Marquette plays at Providence.

While both of those games — on CBS and FOX, respectively — will draw their share of viewers, most of them will come from those four fan bases. As loyal as the followings for those four teams are, it’s not as if we’re talking about Duke, Kentucky, North Carolina or even Villanova or Arizona.

The bottom line is this: If you’re the Big 12, you’d rather have your marquee game of the season — let alone your game of the day — go up against those two matchups rather than square off against the other games later in the day.

North Carolina and Louisville face off at 3 p.m. Florida and Kentucky play each other at 5 p.m. Virginia Tech and Duke go at it at 7 p.m. And unbeaten San Diego State and UNLV are paired up at 6:30 p.m.

Why go up against any of those games if you don’t have to?

Besides, moving the game might not have even been a real possibility. Remember, college schedules are made months in advance. And, unlike the NFL, which has a flex system in place for this very reason, there is no built-in, automatic process for moving college games at the last minute.

Doing so would be a logistical nightmare not only for the ESPN crews, but also for the other schools that would be affected by such a late change, programs that have had their start time printed on all of their promotional materials and plans in place for several days — if not weeks — for how to operate on Saturday.

By keeping the KU-Baylor game at 11 a.m., the Big 12 Conference keeps the focus for basically the first half of a busy Saturday in college hoops on its top two teams.

GameDay being there plays a big role in that, of course. But when it comes to the rest of the country waking up to watch some college basketball, a marquee battle between two of the top-ranked teams in the country is about as good of a way to start a day of college hoops as I can think of. And the Big 12 is in position to take advantage of that.

Moving the game to a later time would just cut into the number of potential viewers and increase the odds that the conference’s ratings and exposure would be smaller.

I realize this isn’t an air-tight argument. Unless KU-Baylor is the only game on television at 11 a.m., there are always going to be some fans who would rather watch their teams play or watch other games and the Big 12 has to live with that.

But why put your conference’s game of the year up against the Dukes and Kentuckys of the world — teams that have enormous followings and even draw a fair number of people who tune in just to root against them — when you don’t have to?

The 11 a.m. tipoff might be a little early and it might not work for everybody — it also might be a little too closely associated with 11 a.m. football kickoffs for Kansas fans — but there’s not a more attractive game anywhere at that time of the day this Saturday, and there’s something to be said for being the conference that sets the table for a late-February afternoon of college basketball.

Listen below to our latest KU Sports Hour podcast, breaking down the KU-Baylor battle:

11AM is good for kid YMCA games.

Interesting rationalization. For us on the West Coast, it's a 9 am start and for the players, it's an early, atypical time to be playing the most important game of the Big Xll conference when everyone needs to be at their best. Plus, who practices or is on a life style schedule to play morning games?

Re your comment about ESPN+ haters, I'm not one, but I'm not a fan of having to watch KU games as well as others without the option to record and save it for future viewing, having the ability to easily FF and RW and also to go slow-mo. The AD has offered weak rationalizations to promote using the app. One can only assume he is really not a fan, does not record or review games for personal usage and is more about the money and not about the true Kansas nation. I still know of many friends and fans who are unable to get the app and are relegated to listening to radio coverage, if that. How sad and inconsiderate is that?