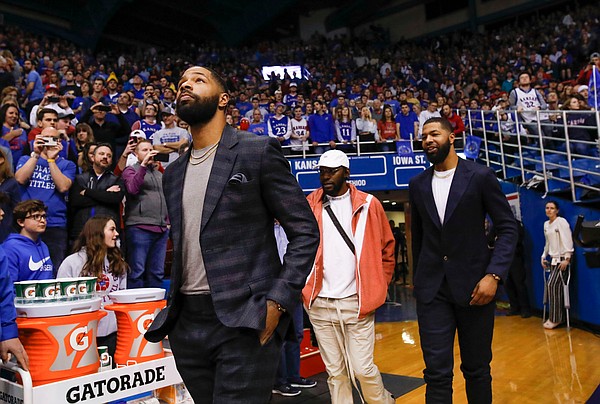 Marcus Morris makes his way onto the court followed by Mario Little and his brother Markieff Morris prior to the halftime ceremony. by Nick Krug

Marcus Morris has played all of three games and scored 33 points for the Los Angeles Clippers, yet the franchise is already treating him like a lifelong contributor.

Monday night, as Morris returned to Allen Fieldhouse to see his jersey raised into the rafters of the building in which he starred for three seasons in college, the Clippers sent a video team from L.A. to Lawrence to chronicle the night.

From following Morris and twin brother Markieff around throughout the night to talking with people in Lawrence and getting feedback from Kansas coach Bill Self, the crew treated Morris like he had been a part of the Clippers organization for years.

It would have been incredibly easy for them to say thanks but no thanks to the assignment. After all, the team just traded for him and had absolutely zero ties to him before Feb. 6. Beyond that, it would have been easy to simply say there just wasn’t enough time to get everything together in order to get a crew to Kansas for the memorable night for the Morris family. But none of that stopped them.

The timing certainly helped. The fact that it was close to All-Star weekend, with the Clippers having a few days off, certainly played a part in the video crew’s attendance.

But the gesture still surely meant a lot to Morris, who talked about his new team and opportunity before Monday’s win over Iowa State.

“I think it’s a chance for something special,” he said. “I’m happy. Just being able to compete for a championship, or even being in that position, I think is big for me and big for my career. I’m ready to get out there and be that missing piece that they were looking for.”

As expected, Self was thrilled to see the two former KU forwards and he marveled at how much they had grown and changed since leaving KU following the 2010-11 season.

“First of all, they both look great,” Self said. “I mean, they’re lean and they’ve both lost weight since they’ve been here even.”

As for the event itself, Self, who was in the locker room and did not see it, was equally pleased with how much the ceremony meant to the twins and how they treated their return.

“I asked Kieff how Marcus did and he said he was great,” Self said. “I asked Marcus how he did and he said, ‘Coach, I killed it.’ And then I asked him, I said, ‘Really, what was your motivation?’ He said they went back and watched all the other senior speeches. So that tells me how much it meant to them, and him, to come back and do that because that’s probably more studying than they’ve done in long time. But I was happy to see them and then they obviously had a lot of teammates that care about them come back, too. So it was pretty special to see those guys as husbands and parents.”

Here’s a quick look back at the short video of the night put together by the Clippers.

Still no clue why these 2? when i think of the morris twins, their arrest record comes to mind first and then the loss to VCU.

I guess now, anything goes. Bar has definitely been dropped.

Love this celebration of a great player and am thrilled that he’s with the Clippers. He’s got a legitimate shot at a ring and he’s earned it.