The case for calling off Saturday's Kansas football finale vs. Texas 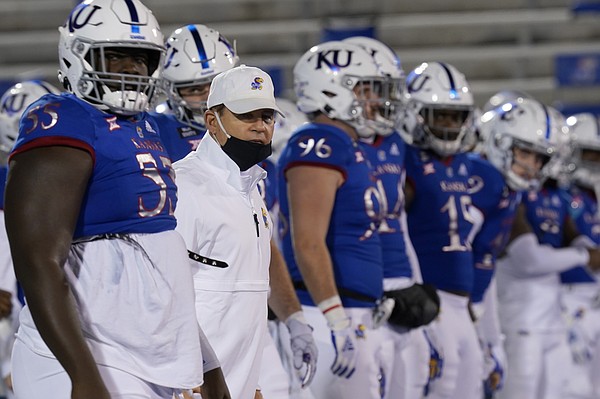 By the time I started writing this, the Kansas football program had already sent out its weekly email notifying the media about the Monday Zoom call with Les Miles, which, this time, was arranged to preview Saturday’s season finale against Texas.

I would’ve sent a separate email if I were them. And I would’ve needed just four words to do it.

At 0-9 overall and 0-8 in Big 12 play heading into the finale of an entirely forgettable season, the Jayhawks have a laundry list of reasons that they could call off Saturday’s game against the Longhorns, which is currently scheduled for 2:30 p.m. in Lawrence.

COVID-19 protocols dictate teams in the Big 12 have a certain number of players at each position to be able to compete, and given the Jayhawks’ recent string of injury issues, opt-outs and trips to the transfer portal, the team has to be right on the line at a couple of positions.

No need to push it. Call it a season.

COVID-19 testing could be another reason to pull the plug. And this one exists as a factor on both sides of the fence.

We haven’t had an update on the number of KU football players out because of a positive COVID-19 test or related contact tracing issues in a while, but it’s been pretty common at programs across the country throughout season and it’s safe to assume that at least some of those KU players who were on the recent did-not-dress list may have been out because of the virus in one way or another.

Who’s going to argue with COVID as a reason to scrap this matchup, which was already postponed once? The first step is already in place with UT's pause. This would be easy.

And then there’s the even more obvious reason to end the season early. It’s one that’s a little bit tougher to embrace for the true competitors out there, but it probably should be considered all the same.

Texas just dropped 69 points on Kansas State and did it by winning the second half 38-13 and racking up 608 yards of total offense.

There’s no guarantee the Longhorns (6-3 overall, 5-3 Big 12) will do the same to Kansas. But there’s also no reason to think they couldn’t.

Two UT running backs alone ran for 311 yards and six TDs against the Wildcats in Manhattan. The Jayhawks currently rank 119th out of 127 teams in rushing defense.

Given those realities, the Texas backs probably could run to Lawrence for the game and still have enough left in the tank to go out and win another game.

I don’t know about you, but a close call on the road against Texas Tech serving as the final act for the 2020 season sure sounds a lot better than a drubbing at the hands of Texas.

Nobody at Kansas would come right out and say that’s why they would be calling off the game, of course. But a little look-yourself-in-the-mirror moment and a creative action plan could achieve the desired outcome without needing to openly wave the white flag.

Heck, the Jayhawks already had Senior Day, so you're not even taking that away with this move.

It’s probably a moot point in the grand scheme of things. No matter how this season ends — a 3-point loss at Tech, a 40-point home loss to Texas or anything in between — very few Kansas fans are going to view much of the 2020 KU football season as a sign of progress or something to build on.

Hard to blame them for that. The scores were rough, the stats were even rougher and there were very few bright spots along the way.

They did exist. But you have to really want to see them to care. Many fans don’t. Again, hard to blame them for that.

Several freshmen and underclassmen made a significant impact this season and many proved they can play at this level. If they can become the foundation and help bring others along with them in the years ahead, things actually could start heading in the right direction again.

I know, I know; you’ve all heard that one a time or 10. But one of these decades it’s going to be true.

We’re getting off topic now.

The bottom line is this: I have to think that nobody on either side would object all that loudly if this weekend’s game never happens. (By the way, there's been talk that this weekend's OU-West Virginia game might get canceled to give both teams playing in the Big 12 title game two weeks to prepare.)

KU could close the book on 2020 and remember it as a season that ended with the Jayhawks having a chance to drive down the field for a game-winning touchdown on the road in the Big 12. Not bad.

Texas, meanwhile, doesn't get anything out of playing the game. Iowa State and Oklahoma already have clinched berths in the Big 12 title game and all the Longhorns can do by playing at Kansas is pick up another win for UT coach Tom Herman, whose future in Austin has been a hot topic of late.

There's obviously very little chance of KU pulling off the upset, but flukey things happen. Would Herman — or anyone at UT, for that matter — really want to risk losing to the Jayhawks at this stage in the season when they don't have to?

“What’s that? You can’t play because your roster is too depleted,” a UT official might say to KU Athletic Director Jeff Long during a phone call this week. “We definitely understand. See you during basketball season.”

Could not agree more.

We should have opted out the entire season. We might have been able to keep Pooka and others had we done the smart, tough thing to begin with.

It’s not too late to get smart.

I'll be very disappointed if we quit...unless the roster is so depleted that it falls below the minimum standards.

It has been argued that younger players 'need reps, game experience' , the texas game is a gift. It should have never been suggested that should not be played. Reps, Reps, Reps. Matt Tait you are wrong on this issue. Jayhawks Football need experience, spring practice, game preparation, all of it, and to just 'stop'? Your arguments are not well thought out.

All true Matt, but you forgot the bottom line. From the Austin American Statesman, "Big 12 commissioner Bob Bowlsby told the Statesman two weeks ago that every league game is worth $3.5 million in TV revenue." All about the $$$

Plus the refunded season ticket $$, I know, not that significant but it's a big deal for KU athletics if they have to refund 550k +/- or credit accounts right now.

Good find, Kent... I think they reported that again today. I could be wrong, but I don't believe that's $3.5 million for just the two teams involved in each game. I'd imagine it's $3.5 million per game for the conference, which, when divided by 10, equals $350,000 per team.

That's certainly not chump change, especially in the current climate. But it's also not the kind of money that could devastate a department, like taking a $3.5 million hit would.

It's going to be interesting to see how this plays out. It sounds like Texas wants to play it and I'm sure KU will if they have the players to do it. If it has to get postponed again, though, at some point you reach the reality where it's just easier to call it off.

But the Texas heated benches are already on their way to Lawrence!

Ha! I'd be lying if I said I didn't think about those benches a few times while writing this... I pretty much do every time UT is scheduled to play in Lawrence!

Then they'd have to give the season ticket holders a refund for the game. Long's still the AD...

Call off the game. Better yet, call off the Kansas program. It's going to suck forever.

How about this website calls off your login....... that would be even better. Go on your Iowa site and talk about how you're always going to be the step child of the Big Ten in everything you do. How pathetic do you have to be to come on another teams website and be THAT guy. Get a life and go away!!!

Good thing the Iowa-Iowa State game got called off or the Hawkeyes would not even be the best team in their own state. ON CYCLONES!

People try to say good things about their own team but when there is nothing good to say they, instead, turn to trying to run down other teams. It's a sad life for people like that.

@Dale, Bryce is actually a Jayhawk but his mommy wouldn’t let him follow the football team anymore because he cried every time they lost so he bailed on them which makes him the Benedict Arnold of trolls. I know, pathetic.

Call off the game. Just show the video of last year’s game.

How about the game 4? years ago.