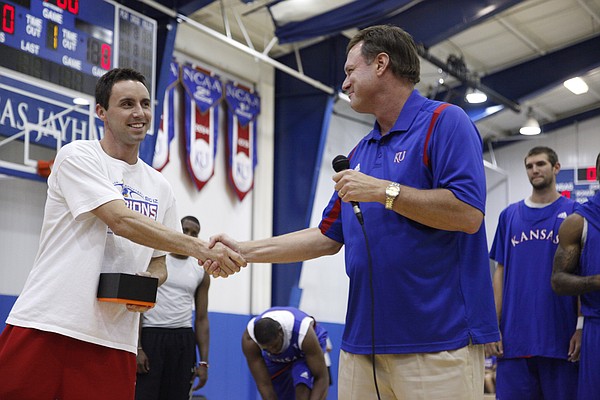 Kansas head coach Bill Self presents Baker University head basketball coach Brett Ballard with a watch as a token of appreciation for his years operating the basketball camp, Wednesday, June 16, 2010 at the Horejsi Center. by Nick Krug

Last spring, after the COVID-19 pandemic shut down sports across the globe, Ballard joined me on The KU Sports Hour podcast series called “Meeting Bill Self” to talk about that first encounter.

It came during Self’s first couple of months on the job back in 2003, and was requested by Ballard with the hope that it would lead to a job.

It didn’t. At least not immediately. And listening to Ballard relive the experience was equal parts agony and delight.

“The meeting was funny,” Ballard recalled. “I had rehearsed my perfect spiel that was going to land me the job (and the whole time I’m in there) he’s looking at the TV, he’s checking his cell phone, he’s looking at the computer screen, he just had 10 million things going on.”

“I’m like, ‘I don’t think he’s even listening to what I’m saying,’ and I’m getting kind of frustrated in my mind,” Ballard said.

As it turned out, Self heard every word. He just didn’t have an opening on his staff at the time. But he liked Ballard. He had heard good things about him. And he knew he was a Kansas kid who played for Roy Williams as a walk-on.

So instead of the old ‘Thanks but no thanks,’ reply, Self began to pump Ballard up.

“I’m dejected and I’m down and al of a sudden he started spinning it and talking me off the ledge a little bit and he sent me out of there feeling better about myself,” Ballard remembered. “I was disappointed there wasn’t a spot, but I felt better about myself.”

Ballard left the meeting with a standing offer from Self.

The opportunity was appealing, but not quite the outcome that Ballard was hoping to see. After leaving the office, Ballard talked to his father about the meeting and told him what Self had suggested.

Ballard’s father, Larry, a basketball coach and teacher himself, believed it was exactly the opportunity Ballard needed to jumpstart his career.

So that’s what Ballard did.

Buoyed by a co-hosting talk radio gig with Brian Hanni on Rock Chalk Sports Talk, Ballard began volunteering his time and hanging around the office to see how things worked.

With each passing month he gained more and more responsibility until he was eventually running Self’s summer camps, serving as the program’s video coordinator and eventually as the director of basketball operations.

Those roles led to assistant coaching spots on Danny Manning’s staffs at Tulsa and Wake Forest and his own head coaching opportunities at Baker and Washburn.

All of them can be traced back to that first meeting with Self, which Ballard said he appreciates more today than he did then simply because he has a better understanding and feel for how busy Self must’ve been at that time.

“I had a lot of meetings just like that first one with coach when I worked for him as the director of ops,” Ballard said. “I laugh now because I can clearly remember how distracted I thought he was in that moment. But he is so good at organizing information and processing through stuff in times when it’s hectic, it’s cluttered, there’s a million things to decide as the head basketball coach at Kansas, (and) he’s so good about organizing those things and being able to decipher information and that was clearly the case during our first meeting.”

Want to hear more? Check out the April "Meeting Bill Self" podcast that features Ballard recollecting that first meeting with Self and much, much more about the KU coach and the Kansas program.