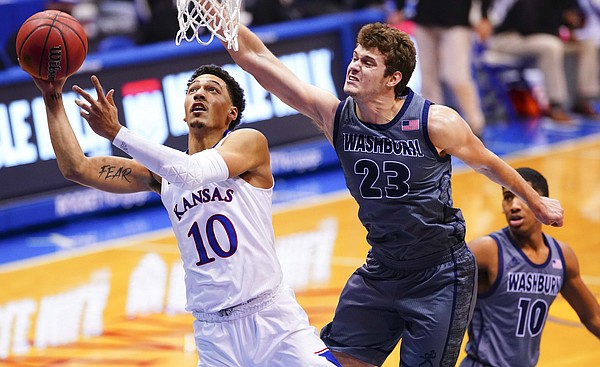 Kansas forward Jalen Wilson (10) gets under Washburn forward Will McKee (23) for a shot and a foul during the first half on Thursday, Dec. 3, 2020 at Allen Fieldhouse. by Nick Krug

1 - Jalen Wilson — Picked up right where he left off and carried some serious confidence from Tuesday night’s performance into this one. In just 15 minutes, Wilson made 4 of 5 field goal attempts — 3 of 4 from 3-point range — and grabbed 5 rebounds, proving that his big scoring night did not force him to forget

2 - Ochai Agbaji — Another steady game for KU’s most consistent performer so far this season. Agbaji scored 16 points, hit 4 of 6 from 3-point range and added 5 rebounds, all in just 24 minutes.

3 - David McCormack — A solid game on a night when he absolutely had to have one. The struggling big man took advantage of his size and made 7 of 8 shots, 3 of 4 free throws and grabbed 6 rebounds in 18 minutes. A good start toward calming the waters with his early play.

4 - Dajuan Harris — Harris did his thing and his stat line doesn’t show it completely. Finished with 4 assists and 1 turnover while also knocking down a sweet floater for 2 points and swiping 2 steals. A few other passes that should have been assists either led to missed shots or free throws.

5 - Marcus Garrett — 5 assists, 5 points and 4 rebounds in 22 minutes. The most important thing was he was out there and appeared to be fine.

6 - Christian Braun — Just 3-of-7 shooting on the night, but all three makes came from 3-point range (3-of-5) and Braun competed hard and even got on the floor early on a night when it would’ve been easy to coast a little bit.

7 - Bryce Thompson — Scored 11 points in 22 minutes and shot 4-of-8 from the floor, continuing to show that he’s not afraid to step up and take shots.

9 - Tyon Grant-Foster — Much more involved tonight, which wasn’t necessarily all good. But he had his moments and looked comfortable, tallying 6 points and 6 rebounds in 16 minutes.

10 - Tristan Enaruna — He looked to be more aggressive, but it didn’t always pay off. Missed all three shots he attempted and finished with three points and two turnovers in 17 minutes.

11 - Gethro Muscadin — Received a bit of an extended look, playing a little earlier than in mop-up time. Fouled 3 times and grabbed 2 boards as a result of the extra PT.

Was DMac limping and if he was why is he playing? Statistically he had a good game but he does not look like the same player he was last year.

Love the versatility of the team.