Could Kansas move past Kentucky as college basketball's all-time win king this season? 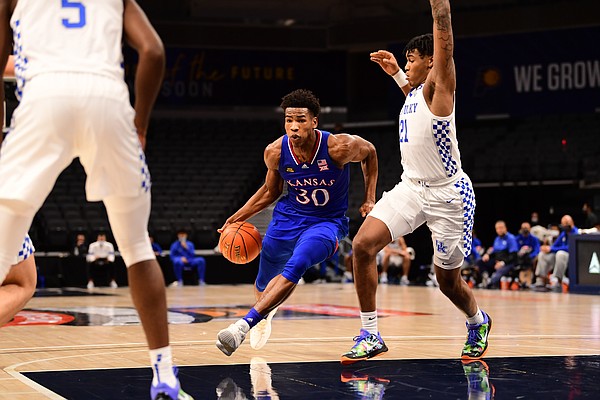 Kansas basketball fans are constantly measuring the Jayhawks against the Kentucky Wildcats, KU’s blue blood rivals from the South.

So it should come as no surprise that there’s a little extra excitement surrounding the comparison this season.

Sure, the Jayhawks knocked off Kentucky at the Champions Classic earlier this month, winning at least another year’s worth of bragging rights in head-to-head battles with John Calipari’s club.

But that was just the start.

While third-ranked Kansas has raced out to an 8-1 start and is riding an eight-game winning streak into Big 12 play in January, the Wildcats have limped out to a 1-6 start and appear to be headed toward a season to forget.

While that won’t deliver any kind of banner and is not likely to impact KU’s ultimate goal of winning a national title, the journey for these two teams through the 2020-21 season is still worth tracking because of where each sits on the all-time college basketball wins list.

When the season began, KU was second to Kentucky in all-time college basketball wins by 16 total victories — 2,318 for UK to 2,302 for KU.

The gap is down to single digits today (2,319 to 2,310), which has Kansas fans buzzing about potentially overtaking Kentucky for the top spot by season’s end.

I don’t know how many emails or Twitter messages I’ve received about the potential for KU to move into first place from people who were making sure that I, too, was tracking the progress. But it’s been a lot.

So let’s jump into the schedules a little to see if we can make an educated guess on where things might stand by season’s end.

We’ve written, and you’ve surely read, plenty about how the COVID-19 pandemic is a constant threat to playing a full schedule. So it’s possible that some of those games for both teams might not happen. But for this exercise, we’ll assume they’ll play them all.

That leaves whatever postseason fate awaits both teams. And it’s important to remember here that even if Kentucky does not make the NCAA Tournament, the Wildcats could still rack up wins in the NIT or CBI postseason events, if those are played as normal this season.

A win is a win, no matter where it comes.

So let’s give KU three games in the Big 12 tournament and Kentucky two in the SEC tourney. Games, not necessarily wins. That evens out the total at 20 apiece heading into March Madness.

That’s where KU could make up some serious ground if Kentucky does not make the Big Dance, is not invited to play in another event or if those events simply do not happen because of the pandemic.

With all of that being said, KU still has a heck of a climb to move into the No. 1 spot by season’s end. Erasing a nine-game deficit in 20-25 games will take a season similar to last year’s for the Jayhawks and, more importantly, continued misery for the Wildcats.

Kentucky is going to get better eventually. And Calipari’s club is going to face weaker competition most of the rest of the way, as well. The SEC is currently ranked by RealTimeRPI.com as the nation’s fifth best conference, just barely ahead of the Big East and ACC. The Big 12, meanwhile, is ranked second.

Of the 18 regular season games still on Kentucky’s schedule, nine of them are against KenPom Top 50 programs, while four are 80th or worse.

KU’s remaining 17-game slate includes 11 games against the KenPom Top 50 and four against teams that currently sit 80th or worse.

KenPom currently has Kentucky finishing the regular season at 10-15, which would make the Wildcats’ 9-9 over their final 18 games.

Those numbers would only help Kansas close the gap by two more wins on the all-time total.

Kansas also could do better than 11-6 over its final 17 games, but even KU going 14-3 would only allow KU to close the gap by five wins from this point on, therein cutting the gap at the top to four.

Postseason play could be a factor, but only if the Jayhawks make a fairly deep run — we’re talking Big 12 title game and Sweet 16 at least.

If the Jayhawks get to the Final Four, they could be college basketball’s win king by the end of the season. Anything shy of that, however, might make it tough.

Regardless of how the rest of this season plays out, though, it’s clear that KU will close the gap from the 16-win deficit it faced heading into the season, and that could set the Jayhawks up to make a real run at the top during the 2021-22 season.

Don’t worry, though. Whatever happens, I will be keeping an eye on it. As will most of you, I’m sure.

Here’s a quick look at the season-by-season breakdown of Kansas and Kentucky victories since Self took the reins in Lawrence.

THIS: " I would rather win a National Championship" - should be tattooed on coaches foreheads..

The SEC is head of the Big East and ACC or AAC?

As of today, and according to RealTimeRPI.com, it is. Can't imagine that'll last, and I didn't look too deeply at how they rank them. Here's 5-10... The columns are for total record, non-conference record, RPI and average strength of schedule...

RealTimeRPI conference rankings as of 12-29-20 by Matt Tait

Matt, I am curious what was the gap between KU and Kentucky when Bill Self Took over at KU in 2003.

I seem to remember that KU passed UNC to move into second place some time maybe 10 years ago. Right around the time that they surpassed 2000 wins.

So the gap between KU and UK ahead of that 2009 season must have been about 18 wins in favor of UK. Heading into this season that lead had only moved by 2 games, which amounts to pretty incredible success by both teams over an 11 year period.

I don't expect UK to be awful all season, but I would hope that KU could whittle down another 3 wins or so this season bringing the difference to around 6 games. Which based on both teams' standards of success over the past decade KU may not be able to overcome any time soon, unless UK runs into trouble such as a coaching swap.

Hey Jonathan - I just added the answer to that first question into the blog. I actually had written a blog about this a couple of years ago and just had to update and double check the numbers...

Self's KU teams have won 509 games to date since he took over in 2003-04 and Kentucky has won 470 games during that same time period. So KU, under Self, has trimmed 39 games off of Kentucky's lead so far.

You must have missed something... The attached screenshot is from Kentucky’s official game notes before their recent game with Louisville, which, as you know, they lost. So it’s officially a 9-win deficit for KU.

It's possible, but let's not pretend that Kentucky doesn't have good players. We only beat them by 3. I haven't watched any of their games except for when we played against them. I don't know why they're only 1-6 but it may not be reasons we would normally suspect. I won't speculate, but I hear that a coach from Wichita State(formerly at Wichita State) is being looked at by some programs.

They can't score. The teams they've lost to have all been top100 kenpom teams but they've scored no more than 64 points in any game but their first game against Morehead State. This includes games against Notre Dame (97) Georgia Tech (74) and Richmond (57). Kentucky is currently #52 per kenpom. When looking at the metrics, there's a lot of shades of red on the shooting figures, but they're actually pretty good defensively (as we witnessed). So yeah a little improvement on O could lead to some Ws.

UK has a lot more NCs though. We rack up the wins, Big XII championships, regular season & tournament, and we're about to break to #1. I really believe last year we would have gotten our 4th NCAA title. It will be harder this year, but doable.

There are no other sporting events I love watching more than NCAA tournament games. Period.

I'm not sure what year it was, probably during Roy's time, perhaps Bill's, but we were 52 wins behind UK. We've made up a lot of ground since then. We were also in third place behind UNC as well.