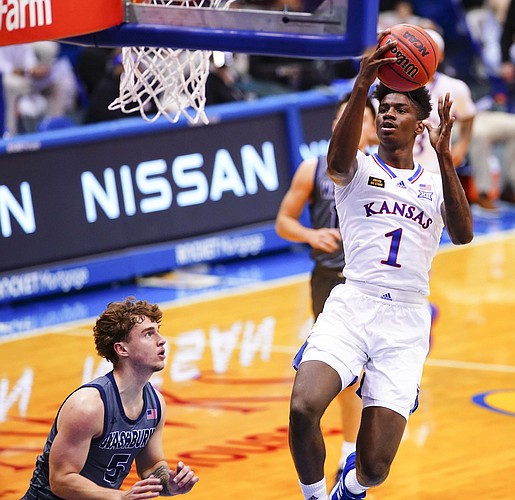 Kansas guard Tyon Grant-Foster (1) floats in for a bucket during the first half on Thursday, Dec. 3, 2020 at Allen Fieldhouse. by Nick Krug

Although both players have been a little slow out of the gate, Kansas coach Bill Self said Tuesday that he believes sophomore Tristan Enaruna and junior newcomer Tyon Grant-Foster could wind up being two of KU’s best players by season’s end.

In order for either to get there, Self has a clear picture of what he’d like to see from both in the weeks ahead.

Grant-Foster has played in all seven of KU’s games this season, but is averaging just 12.2 minutes per game. That includes single-digit minutes in three games and 20-plus minutes in KU wins over Omaha and North Dakota State.

Against NDSU, Grant-Foster was one of KU’s two or three best players and was on the floor in crunch time, which allowed him to hit the game-winning shot and come up with a huge defensive play that helped ensure victory.

The juco transfer is currently averaging 4.6 points and 3.6 rebounds per game, but has yet to find his rhythm offensively, shooting just 39% from the floor, 11% from 3-point range and 63% at the free throw line.

“With Tyon, it’s just being comfortable and confident and understanding what we're doing,” Self said. “Because you guys have seen enough; when he’s just playing and not thinking he’s pretty darn good. But we’ve got him thinking way too much.”

Enaruna also has played in all seven KU games this season, and, similar to Grant-Foster, is averaging 10.2 minutes per game.

For the second year in a row, the sophomore from the Netherlands has shown flashes of tremendous ability — particularly on the offensive end — but also a laid-back demeanor on the court that has kept him from taking the next step.

“Tristan’s got another gear that I'm confident that he'll get to,” Self explained. “I'm not saying that he's not trying hard. But just another gear, from a from a production standpoint, that he can get to that will obviously mean good things for our team.”

In his 10 minutes per game, Enaruna is averaging 3.3 points and 1.7 rebounds per game, while shooting just slightly better than Grant-Foster in fewer attempts — 45% from the floor, 17% from 3-point range and 67% at the line.

Few players on this KU roster have been impacted by the lack of a normal nonconference slate like Enaruna and Grant-Foster.

Instead of 12 or so games to find their footing, with half of them coming against mid-to-low-major type programs, the Jayhawks have played just seven games so far, with four or five of them coming either against elite opponents or at a point in the season when it was tough for Self to trust his bench.

“I think the lack of games that we had on our schedule that you looked at and said, ‘OK, this would be a game which we maybe can catch our breath and get a lot of guys minutes,’ I think that did hurt,” Self said.

From this point on, it’s all conference games for the Jayhawks, with the lone exception being a Jan. 30 game at Tennessee for the SEC/Big 12 Challenge.

So if either Enaruna or Grant-Foster are going to climb to the level that Self believes they can reach, they’re going to have to do it in some high-stakes games against some of the best teams in the country. 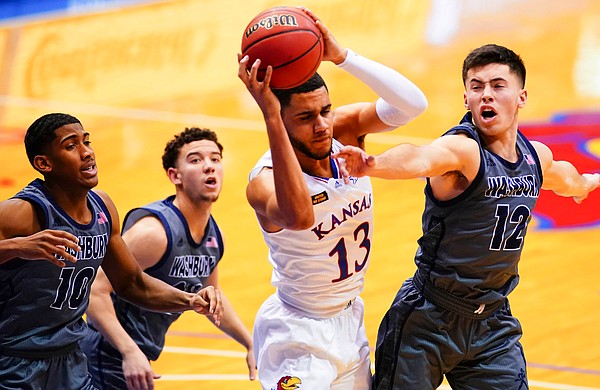 Kansas guard Tristan Enaruna (13) grabs a rebound from Washburn guard Tyler Geiman (12) during the second half on Thursday, Dec. 3, 2020 at Allen Fieldhouse. by Nick Krug

Silvio came in at mid-year and made a contribution by March, so there’s a chance. It will be interesting to see if he gets an opportunity like Ochai a couple years ago.

The best news for each is that this year is a freebie if they and coaches want.

I doubt Enaruna will ever see 20min PT. He doesn't defend his man well. He's got length, pretty good wingspan - Add "Ambition" and "Aggression", he'll be much more productive on both ends of the court.