The reunion that never was for Bill Self and Billy Gillispie 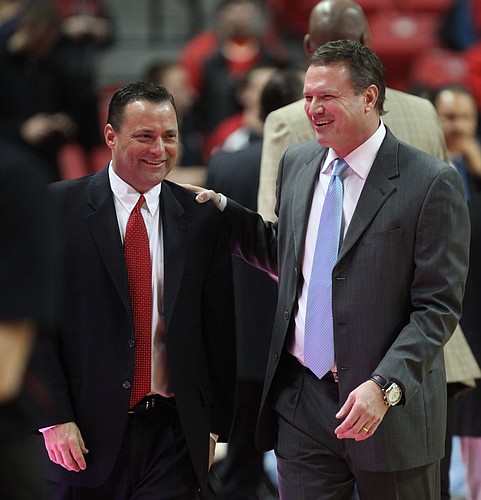 Longtime friends Bill Self and Billy Gillispie were supposed be on opposite benches at Allen Fieldhouse on Sunday afternoon, coaching against each other for the first time in nearly a decade.

Instead, the game between No. 5 Kansas (6-1) and Tarleton State (2-2), which was added late as part of KU’s rebuilt schedule made necessary by the COVID-19 pandemic, was called off because of a positive test in the TSU program.

“We’re obviously very disappointed that we aren’t able be a part of the great basketball tradition at Allen Fieldhouse,” Gillispie said in a statement released Friday night, when the cancelation was announced. “Our players were so excited to compete at one of the greatest college basketball venues in the country. We’re thankful that coach Self and the administration at the University of Kansas were gracious enough to offer us an invitation to play. … At the end of the day, the safety of our players, our staff and everyone involved with our program is and has always been our No. 1 priority.”

Self said he first heard about the potential for Sunday’s game to be canceled through a phone call from Gillispie early Friday afternoon. By 5 p.m. that day, one hour before KU tipped off against Omaha at Allen Fieldhouse, Sunday's game was officially off.

“We found out right before the game,” KU junior Ochai Agbaji said Friday night. "It’s kind of weird. We don’t know what’s going to happen for the rest of the season going forward. That’s part of it, part of what’s going on now.”

Though lopsided on paper — KenPom.com has KU ranked No. 9 and Tarleton State at No. 335 — Sunday’s reunion that never materialized was one that Self was looking forward to from both a personal and professional perspective.

“I know he'll give us some things to have to go against that will help prepare us for our league,” Self said Thursday in looking ahead to the matchup. “I didn't plan on coaching against him this year so I'm just happy we got a game and I’m happy to fit it into our schedule.”

The last time the two friends squared off as head coaches came in February of 2012, when Self’s Jayhawks beat Gillispie and Texas Tech, 83-50 at Allen Fieldhouse.

After employing Gillispie as an assistant coach at Tulsa (1997-2000) and Illinois (2000-02), Self said he saw several staples of his program show up on the teams Gillispie coached at UTEP, Texas A&M, Kentucky and Texas Tech from 2002-12.

"I think there's probably not as much (in common) now," Self said, noting, "he’s a guy that believes strong in make others beat you, don't beat yourself and always be the aggressor, regardless of the situation. His teams have always been really good at that.”

After three years away from coaching, Gillispie, who had a successful kidney transplant in 2018, resurfaced at Ranger College in 2015 and he coached the small community college in Ranger, Texas, to a 103-62 record through last season.

That led to the opportunity at Tarleton State and to the brink of a return trip to Allen Fieldhouse to face his old friend.

It didn’t happen, of course, but Gillispie, 61, said Friday that he was hopeful that a matchup with Kansas can be scheduled again in the future.

“Or maybe even this season, if schedules permit,” he noted in his Friday statement.

For now, Kansas has no plans to add a 27th game back onto its schedule to make up for the missed opportunity against Tarleton State.

A report from the St. Louis Post Dispatch on Saturday indicated that Saint Louis University reached out to KU and several other programs to try to schedule a last-minute game as a make-up on its schedule.

“It’s harder than what you think,” Self said of scheduling games on the fly. “If we say, ‘Let’s play a Div. II (program) or this or that,’ they still can’t play unless they follow our testing protocol the Big 12 has — three times a week, non-consecutive days. Maybe there are some that have, (but) that’s not the direction we want to go right now.”

Instead, KU will spend the next few days getting ready for its Big 12 opener against Texas Tech at 6 p.m. Thursday in Lubbock, Texas.

“The reality of it is if (we played) Sunday, you’ve got Monday, Tuesday, Wednesday to get ready for (Texas Tech) with tired legs,” Self said. “I’ll spin (the cancelation) as a positive. We’ll have fresher legs (since) we won’t play the game and maybe we can work on some things we haven’t been very good at the next couple days.”

How far has Billy Gillispie fallen that he's coaching at Tarleton State? Remember when he was a rising star who turned Texas A&M from a laughingstock into a Big 12 contender and Sweet 16 team? And then he went to Kentucky and flamed out. Billy Gillispie is a cautionary tale: Too much adulation too quickly led to his downfall. Gillisipie is the coaching equivalent of Johnny Manziel.

I think that's a little harsh, but I still can't understand how he ended up that far down. Even if he didn't do great at UK, why wouldn't he at least have had a chance to go to a mid-major, if not someone like a Minnesota or other mid-level Power 5 team? It doesn't make sense to me.

He is/was an alcoholic. I assume he’s gotten some help since then, but soon after getting fired from UK, he got his third DUI. I’m not sure if his drinking led to kidney failure, but he seems to have started his comeback after that.

Frankly I'm glad the game was cancelled. It would have tanked our SOS. Really no reason to play a team of that caliber.

Everybody has some demons they deal with, some successfully, some less so, some covered up, some exposed. While he might not be making millions with unbridled adulation, I’m guessing there are lots of people that would happily take a head coaching position - even at Tarleton State.