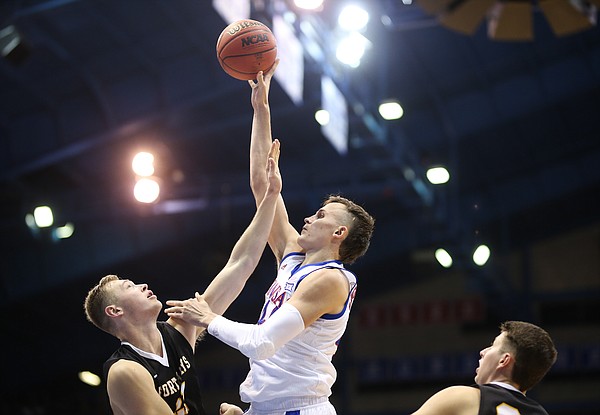 You know about his passion for all things Kansas, you’ve witnessed his crazy faces on the Allen Fieldhouse floor and you probably even saw him actually burn a redshirt on social media earlier this summer.

But just because you didn’t lose sight of him while he sat out the 2019-20 season does not mean you’re fully up to speed on just how ready to play KU senior Mitch Lightfoot is entering his second senior season.

“I think Mitch had a great redshirt year,” KU coach Bill Self told the Journal-World this offseason. “I think a lot of guys have redshirt years but maybe they don’t improve as much as we hope they would. But Mitch improved. He got better.”

Already with three years of experience heading into his redshirt season in 2019, Lightfoot had clearly demonstrated the areas in which he helped the Jayhawks the most.

Throughout his career he has been the team’s most efficient shot blocker. And he also has shown a consistent willingness to use his size, length and toughness to rebound.

Beyond that, the 6-foot-8, 225-pound redshirt senior from Gilbert, Ariz., has shown off an ever-improving outside jumper in recent years, which only adds to the variety of ways Self might be able to use him on the floor.

But, according to Self, the biggest thing Lightfoot gained from redshirting during the 2019-20 season was the opportunity to work on his scoring everywhere else.

Stashed on KU’s scout team and often playing the role of the upcoming opponent’s best big man in practices, Lightfoot had to find creative ways to score over and around KU big men Udoka Azubuike and David McCormack last season.

According to Self, it worked. A lot.

“I’ll be honest with you,” Self said. “He has a better feel for how to score.”

Self didn’t stop there. Instead, after listing off all of the things that so many people already know Lightfoot does well — shot blocking, work on the glass and intangibles chief among them — Self emphasized that his senior forward could be counted on offensively during the upcoming 2020-21 season.

“He’ll give us a guy that can score the ball,” Self said. “Mitch’s improvement allows us to play two bigs because he can score better than he could last year.”

While those two-big-man lineups might not be the primary option for the Jayhawks next season, they do figure to look better than they did a season ago, when KU essentially had three centers in Azubuike, McCormack and Silvio De Sousa, and initially tried to play them at the 4 and the 5 together.

“Instead of two of those three playing 80 minutes a game, it turned out just two of them played 40 minutes (at the center spot),” Self said of Azubuike and McCormack combining to average 42.3 minutes per game while De Sousa fell off to 8.2 minutes per night, buoyed by a suspension that kept him out of most of conference play.

“Everybody thinks we’ll play four guards, which we probably will a lot,” Self added. “But I can’t see a situation where Mitch can’t be your second big in the game when he’s not your first big in the game. He’s going to play the 5 some for us, depending on matchups and things like that.”

If his history at Kansas shows us anything about his offensive production, it’s that Lightfoot could be even more valuable as the season progresses, depending, of course, on what KU runs and how other players develop and perform individually.

During both his sophomore and junior seasons, when Lightfoot played significant roles and averaged double-digit minutes, his offensive rating in conference play, per KenPom.com, was 106 or higher, which was equal to David McCormack in 2018-19 and better than Udoka Azubuike the year before.

If he truly has become a more well-rounded and reliable scorer since then, Lightfoot easily could be poised for his best season yet.

Despite his offensive growth, Lightfoot is too comfortable with his job as a gritty role player to fall into the trap that Landen Lucas temporarily fell into during his senior season, when he tried to display his improved offensive game early on before getting back to the defense and rebounding that made him so valuable.

So it's safe to assume that Lightfoot will continue to prioritize what he does best while occasionally using his offense as a bonus weapon for this deep and talented Kansas team.

The bottom line is this: Lightfoot’s willingness to step aside last season while waiting for a better chance at playing time a year down the road could not have worked out much better.

Self said that Kansas probably could have found ways to utilize Lightfoot last season, but any minutes he would have played would have cut into McCormack’s development or kept Kansas from playing four guards, which Self and countless others said throughout the season was clearly KU’s best lineup.

“Looking back now, we positively made the right decision,” Self said. “I know that he’s so happy to get that year back because of the way the season ended with the coronavirus stuff, and now he can obviously make the most of his senior year.”

Love having a 5th year senior like Mitch onboard. Better than any graduate transfer. Seems like one of those core college players found on successful tourney teams. Looking forward to seeing him play.

Bottom Line, being another year older and another year stronger will help all facets of his game and his presence as a leader, defender, rebounder and occasional scorer are needed way more this year than last year with both Doke in the lane and Devon running the show. It also extended his time in the spotlight as a Jayhawk which is probably the most important thing given he isnt a potential NBA Talent and another year of education. WIN WIN WIN versus suiting up on the bench last year.

Probably not in the first two rounds or an all year long starter...but I wouldn't say Mitch has no shot at the NBA. To me he is one of those tweeners, small at the 2, and a 1/2 step slow at the 3. But as a change of pace...not a lot players at the 3 spot can block like Mitch, not to mention the 2 spot, and, if you add some scoring, defensively he could be very useful off the bench in a lot of situations. Yet to be seen how good he can be.