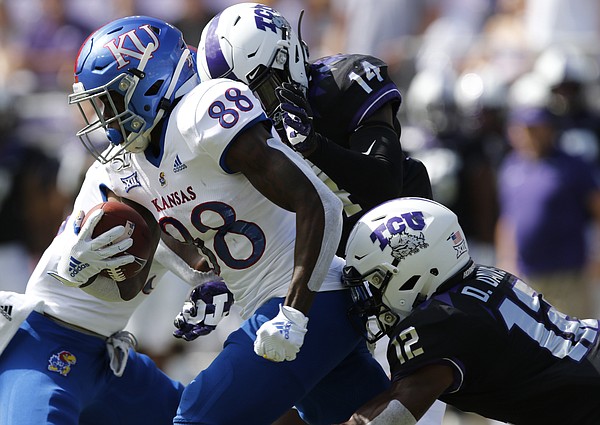 And, heck, you’ve probably even heard enough about quarterbacks Miles Kendrick and Thomas MacVittie to have a decent idea what each of those players can bring to the table for the Jayhawks this fall.

But this Kansas roster, newcomers and all, has more than a handful of under-the-radar players who could play a huge role in how things go during the next few months.

As we move forward with preseason camp and actually get to talk to KU coach Les Miles and some players, we’ll surely (hopefully?) learn more about how the depth chart is shaping up heading into the Sept. 12 opener versus Coastal Carolina.

For now, though, here’s a quick look at a handful of Kansas players who you might not have heard much about but soon could.

I talked to Terry for a while at last year’s KU media day and the former high school basketball player is an All-American in the personality department. This year, however, he could be ready to take a major step forward toward having his play match his friendly, funny and quick-witted demeanor. Terry might have transformed his body more than any player on the roster this offseason, dropping weight and adding muscle from head to toe. That, along with his quick feet and hands, should allow him to move better on the D-Line, where he figures to play a key role as one of KU’s top run stoppers in 2020. The biggest thing about Terry’s new body is that it could allow him to play much more than he was ready to a season ago.

Another player who has added a good amount of muscle to his frame — and another former basketball player — this true freshman from Montgomery, Ala., could make an immediate impact. Listed at 6-3, 265, Robinson has the potential to be used in a number of different ways and places for the Kansas defense. After graduating with the 2019 class as a three-star weakside defensive end, Robinson gray shirted in 2019 and may be ready to show whether that move paid off at a position where KU needs immediate help.

Pooka Magic is a well-known thing in Lawrence and most die-hard KU football fans probably even know what sophomore Velton Gardner is capable of doing in a supporting role out of the backfield. But keep an eye out for Hishaw, a 5-foot-10, 200-pound freshman from Moore, Okla. It remains to be seen what kind of role he might carve out right away, but remember, this was a group that entered the 2019 season with Pooka, Khalil Herbert, Dom Williams and Gardner and was not afraid to use them. Hishaw's true impact might come down the road, but if he finds his way onto the field this year, don't be surprised if he makes you remember the moment.

You’ve probably heard the name but you might have forgotten about him. Don’t. Horne is blazing fast and could be a factor if the Jayhawks are fully committed to Brent Dearmon’s RPO style of offense. A 5-10, 180-pound sophomore from Miami, Fla., Horne is entering his third season with the program after redshirting in 2018 and leading KU’s kickoff return unit with 442 yards on 20 returns in 2019. The Jayhawks are loaded at wideout, so finding a big role there won’t exactly be easy. But if Horne can be a weapon in the return game and a valuable part of KU’s wide receiver depth, he could find himself in a pretty important role.

Opportunities abound in the Kansas secondary and Logan is a player the coaching staff was pretty high on coming out of high school. Could this be the year he takes a step forward and becomes more of a regular on the field for the Jayhawks? A 6-foot, 195-pound cornerback from St. Augustine, Fla., Logan saw enough action as a freshman last season to feel comfortable on the field. Most of that came on special teams, where he returned five punts and nine kickoffs for 178 total yards. Logan also recorded 14 tackles and appeared in all 12 games as a true freshman. A three-star prospect out of Menendez High, Logan’s KU bio says he chose Kansas over offers from Auburn, Ole Miss, Nebraska, Iowa State, Miami (Fla.), Louisville, Minnesota, Pitt, Purdue, UCF and others. We don’t know yet if he’s ready to make a major impact, but he should get a shot in a secondary that needs to find playmakers.

Thanks, Matt. Always enjoy your articles.

Appreciate the kind words, Jim. Fun to be writing about actual teams and plans for games and events again... Let's hope it stays that way!