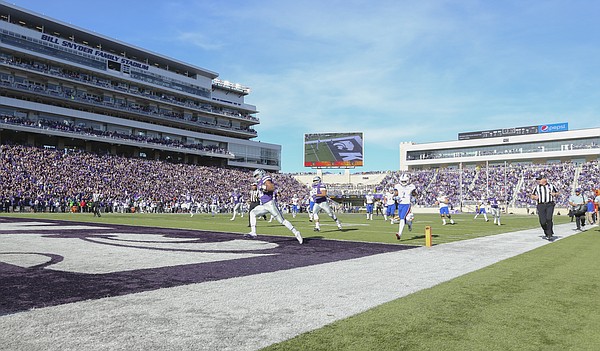 Kansas State defensive back Donnie Starks (10) runs in an interception for a touchdown during the second quarter, Saturday, Nov. 26, 2016 at Bill Snyder Family Stadium. by Nick Krug

The Big 12 Conference is allowing schools to set their own attendance policies based on local jurisdictions, but it’s safe to say K-State’s plan and KU’s plan will have a lot of similarities.

KU has not yet presented its plan to Douglas County, but that is expected to take place this week, perhaps as soon as Wednesday. And while it remains to be seen if Douglas County health officials will approve KU’s plan as it is presented, you can bet the basics look a lot like Kansas State’s.

Here’s a quick look at the key points of the K-State plan, which will allow for a maximum socially distanced crowd of just under 15,000 fans per game at Bill Snyder Family Stadium this fall:

• Tailgating will be prohibited in parking lots controlled by K-State Athletics and satellite lots operated by Kansas State University groups in order to reduce the risk of large gatherings. Parking lots will open in conjunction with stadium gates two hours prior to kickoff and fans will be encouraged to immediately enter the stadium once parked.

• Once inside, fans will not be permitted to re-enter the stadium should they elect to exit.

• With tailgating and re-entry into the stadium eliminated, beer and wine will be available for purchase for the first time ever in the general seating sections of the stadium at multiple locations on the concourse and concession stands.

• Hand sanitizing stations will be located throughout the stadium, as well as signage to encourage social distancing.

KU Athletic Director Jeff Long said last week that he expected Kansas to have fans in the stands at David Booth Kansas Memorial Stadium when the Jayhawks open the season against Coastal Carolina on Sept. 12.

But Long said then that he anticipated KU’s capacity being at or below 50% for the Jayhawks’ five scheduled home games this fall.

It’s not clear if that total would include fans in the suites, which, if used, would provide their own social distancing advantages.

Because there are slight differences between Douglas and Riley counties, from total population to the prevalence of COVID-19 in each locale, KU's plan might differ from what's listed above.

But it's hard to imagine the most important components of each plan — attendance percentage, face masks and tailgating — being that much different.

I think our fans have been practicing social distancing at the stadium for about 10 years now.

The question is will there be that many wanting to go to games, 12,000 at K-State? Not many olds are going to take the risk.

My gut reaction was that they will get their quota in a heartbeat, but you may be right. It will be interesting to see.

In venues that sold out prior to COVID, whatever the allowance is in this timeframe, will be sold out.

People want to go to sporting events and are yearning for the opportunity to go.