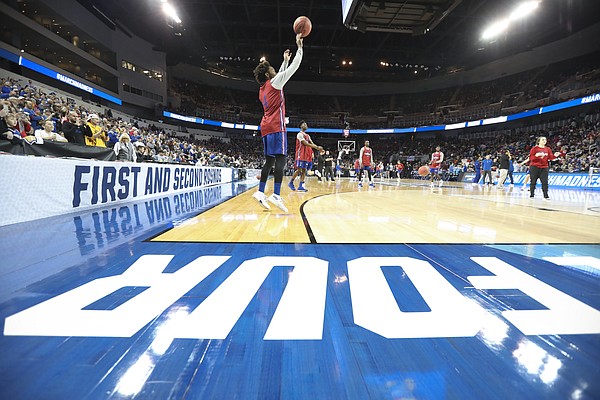 Kansas guard Devonte' Graham puts up a three from the corner during the Jayhawks' practice on Wednesday, March 14, 2018 at Intrust Bank Arena in Wichita, Kan. by Nick Krug

As college football scrambles to salvage what it can of the 2020 season, several key college basketball officials are already working toward plans for the 2020-21 season and NCAA Tournament next March.

Coaches, administrators and NCAA brass have engaged in discussions about what’s possible, what obstacles they must clear and what challenges must be addressed so that college basketball does not find itself in the same spot college football is in today.

Of course, there are no guarantees that even their best efforts or the most detailed plans will override the impact of the COVID-19 pandemic. But the good news is they’re talking and working and thinking about all of the ways they can make the 2020-21 season happen.

What it looks like, how the schedules line up and how many fans (if any) are allowed in the arenas might not be known for sometime. But those are all minor concerns compared to the bigger picture of making it safe to play in the first place.

Two weeks after saying college basketball would be played this season, NCAA Senior Vice President of Basketball Dan Gavitt on Thursday told Andy Katz of NCAA.com that he remained confident that the NCAA Tournament would be back in 2021.

“We’ll be flexible,” Gavitt told Katz. “We’ll be nimble and we’ll deliver what the country is desperately looking for again, and that’s just an incredible March Madness tournament in 2021. … We will absolutely do all we can do — whatever assets, whatever resources, whatever it takes — to try and give our young people the chance to play the game they love.”

One of those paths potentially could include creating a bubble system similar to that used in the NBA, WNBA and NHL, which all have returned to action this summer without major incidents.

NCAA President Mark Emmert, in a separate interview on the NCAA website, said he was in favor of exploring the bubble approach and believed there were plenty of ways to ensure the return of March Madness in 2021.

“Starting with 64 teams is tough,” Emmert said of a tournament inside a bubble. “Thirty-two? OK, maybe that’s a manageable number. Sixteen? Certainly manageable. But you’ve got to figure out those logistics. There’s doubtlessly ways to make that work.”

Emmert said that Joni Comstock, the NCAA’s senior vice president of championships, and Gavitt have been working with conferences and oversight committees to figure out the details and economic impact of any such plans.

“It’s obviously expensive to do that,” Emmert said. “But we’re not going to hold a championship in a way that puts student-athletes at risk. If we need to do a bubble model and that’s the only way we can do it, then we’ll figure that out.”

The good news for college basketball, unlike college football, is that time is still on its side.

Official practices for the 2020-21 season do not open for another six or seven weeks and opening night (Nov. 10) is still almost three full months away.

Because of that, Gavitt said the goal remains to play the season and the NCAA Tournament as currently scheduled.

But as more is learned about the virus and challenges continue to arise, the NCAA has made it clear, at least with college basketball, that they are willing to be as flexible as necessary to give the sport every chance possible this winter.

“Our first and primary goal and preference is to have the tournament on the dates that are set, at the venues that are pre-determined,” Gavitt said. “But if the virus necessitates a different path, we will adjust accordingly. The health and safety of the players and the coaches and all the people around the game will be primary.”

Added Emmert: “(With) men’s and women’s basketball, we’ve got to do what we need to do to support those athletes and those timelines. We’re talking, of course, with our media partners pretty constantly now about what flexibility they would have and we would have. We’d love nothing more than to hold the current dates constant, and that may well be doable. The virus is going to be an important part of this conversation because we've got to do it in a safe fashion, but we’re hopeful that we can do that, but we are looking at alternatives. ... These are not insurmountable problems. They're hard. But they're not insurmountable."

The health and safety of the players and the coaches and all the people around the game will be primary.”

As a society can we move past this phrase? It is kind of a no **** sherlock comment.

Can we agree this is the default stance on anything in life.

I am more hopeful for basketball, but if you needed a yes/no today, it would still be "no" we will not have college basketball this year. No backbones.

I don't think you're alone in feeling this way. I've heard/read that phrase hundreds of times in the past few months and every time I hear it I think it's such a shame because (a) it should be obvious and (b) whoever said it used that time to state the obvious when he or she could have used it to say something more meaningful.

I get it. I'm sure you do, too. And I'm sure to some extent they have to say it. But it's definitely starting to ring a little hollow...

Can athletes opt out without losing their scholarship? I can't help think there are some in both football and basketball who are succumbing to peer pressure.

Opt out? Why not? Seems like if you had folks at home that were high risk, you should be able to take a pass. If all the classes are online, they could stay at home, redshirt, keep their grades going, and not cost the schools all that $$ for their on-campus training/room/board, etc. Then come back next year, (assuming vaccines are available then) but the coaching staff has to figure out all the scholarship distributions, & good luck with that!