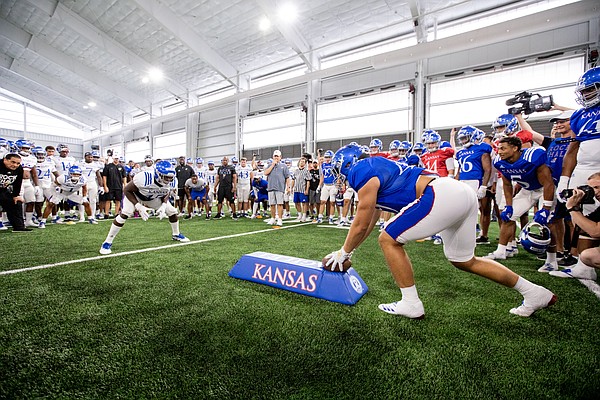 Members of the Kansas football team form a circle as two players go head-to-head in the Jayhawk drill during practice on Thursday, Aug. 8, 2019. by Nick Krug

In a world where so much is still unknown about the COVID-19 virus that has derailed the 2020 college football season, let me share with you one certainty — this thing is on the players now.

With the Big 12 moving forward with a 10-game season this fall, it’s the players who will decide not only the outcome of the games but also whether there will even be games in the first place.

The challenge that rests at their feet is far tougher than blocking a future first-round draft pick on the edge or trying to hang with top-ranked Oklahoma. But it can be done.

If it isn’t, there probably won’t be football for very long this fall.

“The coaches and medical professionals are no doubt talking to (their players) about the risk they take to not only themselves but their teammates and, to some extent, their season if they put themselves in circumstances where they have increased exposure,” Big 12 Commissioner Bob Bowlsby said during a Wednesday teleconference.

So far, players in programs across the country have done an admirable job of following the rules and keeping themselves healthy enough to keep the season alive. The execution in that department has not been flawless, but no one expected it would be.

And it has been good enough to inspire the Big 12, ACC and SEC to push forward while the Big Ten and Pac-12 have bowed out.

But the hardest part is still ahead, and staying on the right side of the testing when thousands of other students make their return to campuses will make the task more daunting.

There will be parties, nights out and hordes of college kids doing what college kids do. And football players everywhere will feel the temptation to join the fun, especially after victories.

But if playing this season is as important to them as so many of them have so clearly stated it is, then they cannot make the decision to join. It’s simply too risky and too much is on the line.

Kansas Athletic Director Jeff Long said Wednesday night that he and head coach Les Miles met with the Jayhawks earlier that day to begin explaining some of the priorities and areas of emphasis for the upcoming season.

That discussion had nothing to do with Brent Dearmon’s offense or how KU’s revamped secondary might look.

Playing with a full team is a nice thought. But it probably won’t happen for too many teams this season. Players will test positive and get sick. The goal, though, should be for these guys to come together to make it so the team, as a whole, can compete for 10 weeks this fall.

That’s a scary concept when you’re talking about a roster that includes 119 players. More than 100 of them could play this thing perfectly and follow the rules to a tee. But if even 5% of them misstep, it could cost the Jayhawks a game, a month or even their season.

“The student-athletes are going to have to be smart about it,” Bowlsby said. “Or they’ll find themselves exposed and a percentage will get the virus.”

If that percentage is too high, what comes next won’t be much fun for anyone.

We should move to the spring schedule being promoted by the Purdue coach. Best possible solution.

It will only take one athlete being exposed due to carelessness to turn around and potentially pass it on to other players, potentially all of them. It will take discipline by everyone, athlete, coaches, staff, and everyone they have to be in contact with. And, yes, I know many young people feel it's only "like the flu" but reports are coming out now that this may be causing long-lasting heart problems that could affect someone years after they get past the virus.

It's been reported that Oklahoma has 9 players that have tested positive.

While it's no death knell, if that sorta news keeps happening to Big 12 teams my guess is we end up playing in the spring.

@Brian. I agree. Fall will cancel at some point in time. But I’m betting no spring ball either. I’m not real confident in next summer either.