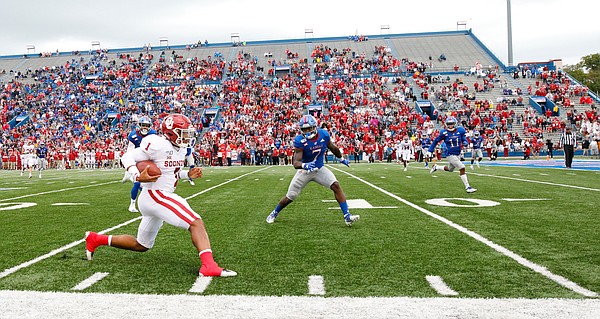 Oklahoma quarterback Jalen Hurts (1) runs up the sideline as Kansas safety Davon Ferguson (7) closes in during the second quarter on Saturday, Oct. 5, 2019 at Memorial Stadium. by Nick Krug

The Big 12 Conference is moving forward with college football in 2020 but not at the expense of common sense.

During an hour-long conference call with reporters from across the country on Wednesday, Big 12 Commissioner Bob Bowlsby explained the thinking behind the Big 12’s decision to press on while making it clear that no one involved expects a season without issues.

“It’s an ever-evolving environment,” Bowlsby said of preparing to play sports during a pandemic. “And we will find ourselves with bumpy spots during the fall. There isn’t any doubt about that. But I think we’re very well prepared to deal with those things.”

Bowlsby’s comments came one day after the Big Ten and Pac-12 decided they were not prepared to deal with those obstacles. Instead of forging ahead like the Big 12, ACC and SEC, those other two Power Five conferences shut down the 2020 fall season.

But don’t mistake the Big 12’s willingness to play and the caution shown by the Big Ten and Pac-12 for conferences living in different worlds.

In some ways they are. There are more major cities in both the Big Ten and Pac-12 than there are in Big 12 Country. And therefore, there are more cases and the potential for higher exposure.

But the challenges created by COVID-19 are the same. The Big 12 just appears to be more prepared to tolerate the risk associated with moving forward.

It’s up to you to decide whether that’s the right way to play it. There are no right or wrong answers here, only a group of people trying to make sound decisions to benefit the athletes, the fans and, of course, their financial bottom lines.

So the Big 12 moves forward hoping for the best and prepared for the worst.

If there’s one thing we’ve learned in the past few months it’s that things can change fast when you’re trying to plan for sports in the middle of a global pandemic.

As Bowlsby put it: “We found that what we thought was golden 60 days ago is garbage today.”

But the Big 12 appears to be prepared for that, too.

This is not an all-or-nothing endeavor. Bowlsby made that clear on Wednesday. If the environment were to change enough to push the conference’s medical professionals to caution against playing, the powers that be within the Big 12 appear to be ready to heed that warning.

So far they haven’t had to. And the hope on the inside is that they won’t.

“If we get to the place where our doctors and scientists say, ‘You know what, you guys have got two wheels off the track and you’re headed for a train wreck,’ we will pivot that day,” Bowlsby said. “Making adjustments on the fly (is) going to be a part of this.”

In many ways, that line of thinking brought us to today.

Bowlsby pointed to the positive data coming from summer workouts and the start of preseason camp as one of the biggest reasons for hope.

Nearly every Big 12 football program encountered a spike of positive tests sometime in June, when players first returned to campus for voluntary workouts. But after workouts were shutdown temporarily, the numbers improved, the positive tests dropped dramatically and the results of the testing have been on solid ground ever since.

Bowlsby called preseason football camp the closest thing to a bubble that colleges can reasonably create. And with the bubble approach working well in the NBA and NHL, there’s no reason to think that the Big 12 can’t at least get this season started six weeks from now.

It’s all real-time living from this point on, though.

The plan to test athletes on Sundays, Wednesdays and Friday evenings during the season seems sound.

If it is, we’ll have a season. If it isn’t, or if the results of that testing paint a gloomy picture, we won’t.

We’re living in a complicated time, but the question of whether college sports can happen this fall really is that simple.

The Big 12 appears to get that and is cautiously putting one foot in front of the other while leaning on the experts every step of the way.

It’s hard to argue with that approach.