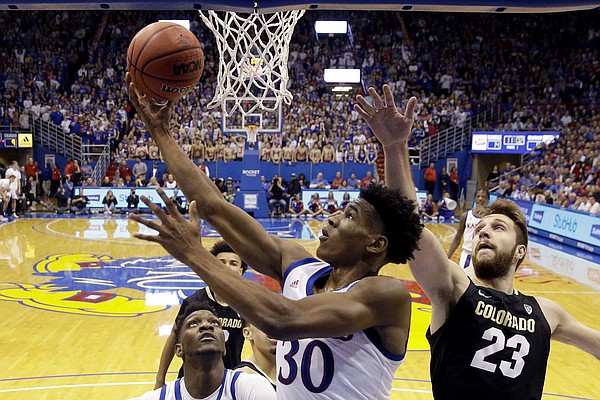 Kansas' Ochai Agbaji (30) gets past Colorado's Lucas Siewert (23) to shoot during the first half of an NCAA college basketball game Saturday, Dec. 7, 2019, in Lawrence, Kan. (AP Photo/Charlie Riedel) by Associated Press

The 2020-21 Kansas men’s basketball schedule, as currently constructed, took another hit on Tuesday, when the Pac-12 Conference announced it would postpone all sports competitions through the end of 2020.

The news came in conjunction with the Pac-12 calling off the 2020 college football season and it impacts at least three games on the KU men’s basketball schedule.

The KU women’s basketball schedule has not yet been made available.

Entering Tuesday, Bill Self’s squad had games scheduled with Pac-12 programs USC and Colorado in mid-December. The Jayhawks were slated to host USC on Dec. 19 and travel to Boulder, Colo., on Dec. 22.

Per the Pac-12’s Tuesday announcement, those games will no longer happen.

Also in jeopardy is KU’s spot in the Wooden Legacy Classic in Anaheim, Calif., where KU was to join Pac-12 program UCLA as well as Georgetown and Virginia in a four-team Thanksgiving-week showcase.

The pairings for that even have not yet been released, but KU obviously will not be playing UCLA even if the event moves forward by picking a replacement for the Bruins.

KU already lost a home game with Harvard from its 2020-21 schedule when the Ivy League called off all sports for the rest of 2020 in early July.

Last week, the Jayhawks announced Stephen F. Austin as the replacement for Harvard on Dec. 29 at Allen Fieldhouse on the 2020-21 schedule.