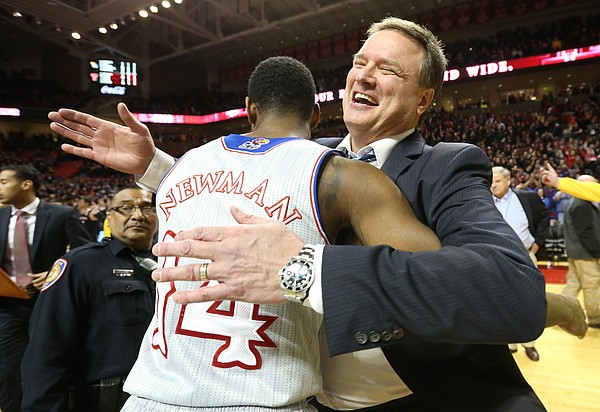 Kansas head coach Bill Self gives a hug to Kansas guard Malik Newman (14) following the Jayhawks' 74-72 win over Texas Tech on Saturday, Feb. 24, 2018 at United Supermarkets Arena. Newman helped force a Tech turnover on one of the final possessions. by Nick Krug

The messaging service known as Cameo — through the Cameo app or at cameo.com — is about to get a lot more popular with Kansas basketball fans.

KU coach Bill Self revealed on Monday that he had signed up to participate in the service, which allows people to pay for personalized messages from celebrities from all walks of life.

Typically, the bigger the celebrity the more the Cameo message costs.

For instance, you can have Caitlyn Jenner send a friend of yours a personalized message for a cool $2,500. Mike Vick or Floyd Mayweather will do it for $1,000. And you can create a message for a friend or family member from Kareem Abdul-Jabbar or Roger Clemens for $500.

And the KU coach who is set to enter his 18th season in charge of the Jayhawks said in his Cameo introduction that all of the money raised through his Cameo appearances would go toward “player-led initiatives on our campus and in our community, promoting equality.”

The way it works is simple. Pick your celebrity and send in your script online or through the app.

You can be as vague or as specific as you’d like with your instructions and your chosen celebrity will record a personalized video for that big promotion, to wish someone happy birthday or whatever other occasion you’re interested in celebrating.

After your credit card is charged, the video is sent to your email and you can share it with the person you made it for in a number of different ways.

Self is the fourth Jayhawk to sign with Cameo, joining former standouts Thomas Robinson ($75), Perry Ellis ($20) and Malik Newman ($100).

I can only imagine the text exchanges between Self and Newman about their Cameo fees intially being the same.

Robinson and Ellis both have past examples of their efforts on their Cameo pages. And I would bet that Self will soon have plenty of his on there very soon, as well.

Looks like Bill upped his fee to $150 after talking to Malik.

Too funny. I've updated the story. Thanks for pointing that out!