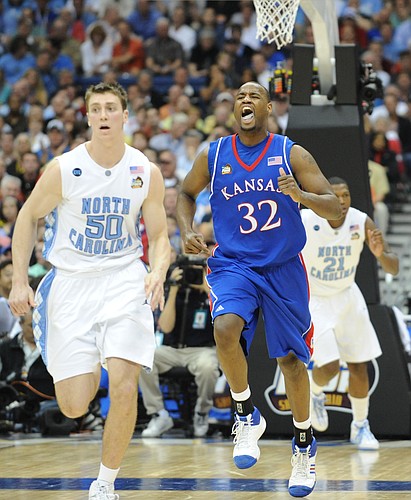 Kansas forward Darnell Jackson roars as he trots back on defense following a bucket in the second half Saturday, April 5, 2008 at the Alamodome in San Antonio. by Nick Krug

If you have something against Kansas basketball coach Bill Self saying words like “perfect,” “terrific,” “perfect execution,” or “so good,” Episode 3 of KU’s Self Perspective series might not be for you.

The third episode of Self’s at-home video series takes Kansas fans back through the Jayhawks’ 84-66 Final Four victory over North Carolina in 2008, when Kansas played what Self called, “one of my favorite all-time games ever.”

The bulk of the 29-minute episode covers the start of KU’s victory, when the Jayhawks raced out to a 40-12 lead. That score is as well-known in Kansas basketball lore as just about any individual score in history.

And Self made no effort to hide his feelings on the start or the score.

Although the episode does not take viewers all the way to the 40-12 mark, you certainly got the point and could see that the Jayhawks were outplaying the Tar Heels in every way imagineable.

For a while, Carolina flipped the script, outplaying Kansas after the torrid start and making a game of it midway through the second half.

Carolina trimmed the KU lead all the way down to 5 at one point, before Kansas closed the game on another strong run, pushing the lead back to 21 before settling on the 18-point final margin.

"That was fun,” Self said, noting that the extra storyline surrounding Kansas against former KU coach Roy Williams added to it and made it “extra special” for a lot of people. “It was certainly not a distraction for us. I think our guys did rally around that. And that was maybe even a little bit more of a motivating factor.”

Here's a quick look back at that 2008 Final Four victory from our KUsports.com archives:

• Our photo gallery from that night

And here, in case you missed them, are the first two episodes of "Self Perspective."

Look for more in the next few weeks.

The Game that ended Billy Packer's Career! When KU got up 40-12, Packer exclaimed "this game is over!" Jim Nance tried to bail him out by saying, "you are kidding right?". But, Billy stuck with his Guns, "Nope it's over"!

Most of TV America (except KU and NC Fans) turned off their TV's and went to Bed. CBS was Livid and Billy's contract came to an end after the Monday Night Mario Miracle!