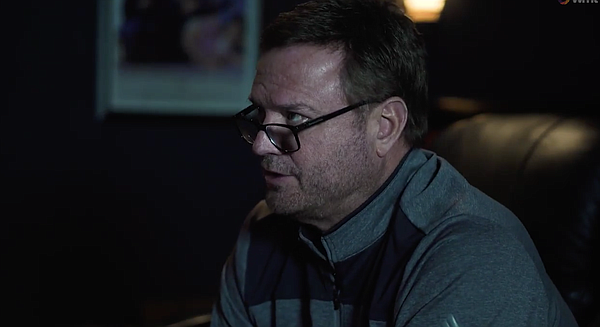 Kansas coach Bill Self watching film of KU's overtime win over Dayton in the 2019 Maui Invitational. by Matt Tait

It was one of the games of the year in college basketball during the 2019-20 season — if not the game of the year — and Kansas basketball coach Bill Self brings it to you from a whole different point of view.

In the second episode of KU’s new film breakdown series, “Self Perspective,” the Kansas coach takes fans back through the final 7 minutes of regulation and overtime of KU’s 90-84 victory over Dayton in the Maui Invitational title game back in November.

You’ll remember as the game Devon Dotson and Udoka Azubuike combined for 60 points to lead the Jayhawks to the Maui title. But Self remembers it for so much more.

From breaking down good and bad defensive possessions, to pointing out when and where a block-out should have come, Self highlights just about every meaningful aspect of the final 12 minutes of that terrific game.

The two things that keep coming up, though, are the elite play of his point guard and center. And it’s not just on scoring plays either.

If you’ve ever wondered how and why the Jayhawks get the easy buckets they do or what is supposed to happen when a big man like Azubuike sets a high ball screen, you’ll learn a lot from this episode alone.

One of the other interesting elements of this particular episode is how much of Jay Bilas’ commentary you can hear during the playback. A lot of it is either a repeat or a preview of something Self said in his breakdown of the game and specific plays.

“That was definitely a big boy game,” Self said in summing up the 40-minute film session. “We did a lot of things poorly down the stretch, but we did a lot more things right.”

It was a great game, and the breakout game for both teams. The Jayhawks played to their expectations for the first time. Dayton suddenly became a reality to the basketball world and started to appear on top 20 lists. Neither team looked back.

Self's commentary is interesting and instructive, although basketball junkies would probably follow his thoughts better than I. A fun sidenote to Self's "Perspective" sessions is to be able to hear much of the ESPN broadcast in the background.

I don't normally watch long videos unless they are actual games. But I have really enjoyed both episodes of Self Perspective. Keep 'em coming!

Apologize for the off-topic comment/question: Ant chance we can hire Karen Aston for the women’s program?

Seems like a home rub hire in every way.

If there is a silver lining to the epidemic we are enduring, it is that HCBS has time to do his "Perspective" tapes. No better way to spend computer time than receiving an education on the exquisite minutia of how he coaches basketball.