In new collaborative video, KU men's basketball team shows its appreciation for front-line workers in the fight against COVID-19 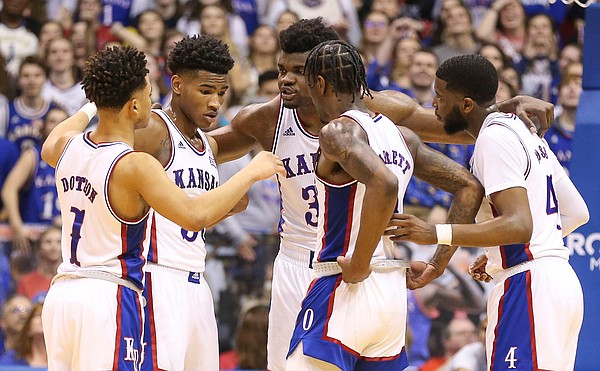 The Jayhawks huddle up during the second half, Wednesday, March 5, 2020 at Allen Fieldhouse. by Nick Krug

Using the tagline, “We’re all in this together,” the Kansas men’s basketball program recently put together a five-minute video encouraging fans and people around the world to stay safe and positive during the pandemic.

One by one, the Jayhawks appeared on the screen, most of them from their hometowns, sharing their gratitude for those in the health care industry and other essential workers who have helped fight the COVID-19 crisis.

"I just want to give a quick shout out to those who go to work every day and risk their lives,” senior center Udoka Azubuike said during his portion of the video. “Stay positive and we’ll get through this together.”

Sophomore point guard Devon Dotson led things off from his front porch in Charlotte, N.C., noting that he “can’t wait to see you all soon and get back on the court.”

The rest of the team then followed, putting their own spins on the same general message of appreciation and hope for the fight against the coronavirus that has impacted people from all over the world.

“We’re all one team,” sophomore guard Ochai Agbaji said. “Stay close, stay healthy, stay inside, but also get your work in.”

That theme of anything relating to basketball was common throughout the video as several current Jayhawks, like Dotson, noted that they could not wait to get back to the game they love.

At the same time, however, they all made it clear that they understood that this battle was bigger and more important than anything that takes place on the hardwood at Allen Fieldhouse and other gyms around the country.

“I really miss being out there with my brothers, playing in front of you guys,” freshman wing Tristan Enaruna said in the video. “But we’ve got to realize that some things are bigger than basketball. Even though it’s hard, we’ve got to stay positive and think into the future in a bright way because better days are coming.”

Kansas coach Bill Self has replaced preparing for and competing in new games by watching film and breaking down old ones this month.

And the thing he misses most about life without the NCAA Tournament is “the element of competition.”

Self explained that, and more, during a recent appearance on "The Doug Gottlieb Show."

“It’s the whole thing about competing for a championship,” Self said. “Everybody has the same chance when the tournament starts, the whole thing about testing your own ability, your traits, against others that are the very best at their business, the quick turnaround and how to make adjustments in a 48-hour period. There’s so many things that go into it that really magnify what we do.”

He continued by listing a few more areas of emphasis during any tournament run.

“The ability to control a team when there are so many distractions,” he said. “The ability to get them to believe it’s their idea when it’s all yours and to buy in. … It’s challenging. It’s fun. But it’s more difficult than what many people can understand. “Everybody’s experienced good and bad in the tournament,” Self added. “I mean, there’s no doubt about that. And we’ve lost in the first round twice. I can tell you exactly who we lost to. I can tell you where they were. I can tell you why we lost, how I didn’t prepare them. And then I can’t tell you the wins. But I can certainly remember those games.”

According to Mike DeCourcy, of The Sporting News, former Kansas forward Danny Manning is the second best player in all of college basketball in the expanded NCAA Tournament bracket era.

Earlier this week, DeCourcy ranked the 68 best players in the college game since the NCAA Tournament expanded to 64 teams (and later 68) beginning with the 1984-85 season.

“Manning’s performance in the 1988 tournament, particularly the national championship victory over Oklahoma, ranks with the greatest ever,” DeCourcy wrote. “He averaged 27.2 points and 9.3 rebounds during the tournament (and) it was his willingness to take as many shots as necessary to elevate the team known as “Danny and the Miracles” to the championship that made the difference for Kansas. Manning also was a major contributor on the 1986 Kansas team that lost in the national semifinal.”

One other former Kansas player appeared on DeCourcy’s list, with point guard Frank Mason III checking in at No. 66.

Mason’s 1,885 career points and national player of the year prize following his senior season helped him crack the Top 68.

Very nice to see this message. Whoever is helping the Jayhawk players to do community service also deserves a shout out - our players know by the end of their time at KU that it's not just playing basketball - it's being part of a team, a University and a community.

Now we do need someone to help our players understand some of the basics about making selfies, like don't rock back and forth, speak clearly and talk to the camera. Or would that be an impermissible benefit by having someone who's a media staffer helping coach players?

Nice, timely message to hear from some young men who saw their season end way too early. They were poised for a great run, but now have to reset for next year. Hopefully life will return to normal by fall, but we really don't know... Rock Chalk one & all.

Looks like Danny is pulling a second miracle by maintaining his employment at Wake Forest. After 6 years he has only one winning season and one tournament appearance, a play in loss to K-State. Overall his win/loss record is below .500 and his conference record is below .300. Seems like he’s been on the hot seat forever.