17 years ago today, Bill Self was introduced as the next Kansas basketball coach 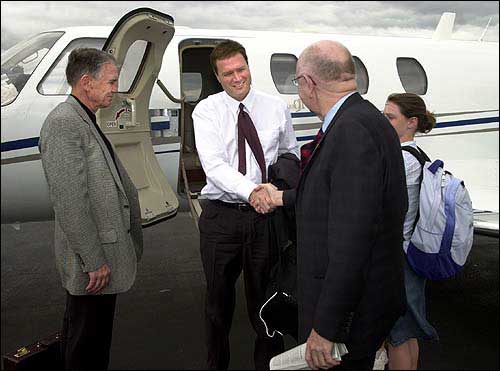 Kansas University interim athletic director Drue Jennings, left, looks on as KU Chancellor Robert Hemenway, second from right, greets Illinois basketball coach Bill Self, center, who arrived with his family, including daughter Lauren, right, at Lawrence Municipal Airport. Though Hemenway and Jennings declined comment on the matter Sunday when Self arrived, a news conference has been scheduled for Monday, April 21, 2003 to introduce Self as the next Kansas men's basketball coach. by AP Photo

When Kansas basketball coach Bill Self was formally introduced as the eighth head coach in program history 17 years ago Tuesday, then-KU Chancellor Robert Hemenway called it “a day to make dreams come true.”

No one could have known then that Self would go on to exceed the highly successful stretch of winning that Roy Williams accomplished before Self was hired, or that Self one day would eclipse 700 career victories — 500 of them at Kansas — and enter the Naismith Memorial Basketball Hall of Fame.

Those dreams and many more have come true for Self, who enters his 18th season at Kansas with an .821 winning percentage at KU (501-109), an overall winning percentage of .768 (708-214) and a reputation as one of the best coaches in the game of basketball.

Looking back on that introductory press conference from 17 years ago, it was clear that Hemingway and company believed that Self was up for the challenge of following Williams, who left for North Carolina after back-to-back trips to the Final Four and 418 wins over 15 seasons.

“When the coaching position became open, I said that we’d talk to the best coaches in the country and we’d act decisively,” Hemenway said before introducing Self. “We accomplished both of those goals. We spoke to some outstanding coaches, but we focused on one man — Bill Self. We knew his record, we knew his reputation for integrity and we knew of his strong respect for KU and all that it stands for.”

Interim athletic director Drue Jennings, who played a big role in the hire said toward the end of the introductory news conference that KU did conduct other interviews but that “Bill Self has been our No. 1 priority all the way along.”

While introducing him, Hemenway handed Self a blue folding chair that read, “Kansas Basketball Head Coach Bill Self” on the back of it and, in doing so, ushered in one of the most successful stretches in the rich history of the blue blood basketball program.

“We’d be pretty glad if you’d just keep it for the next 25 years or so,” Hemingway famously remarked before turning the microphone over to Self.

Never one to pass up an opportunity to take advantage of a light-hearted moment, Self responded with, “I just touched that and it already feels very hot.”

That was not the last joke Self made during his 32-minute introductory news conference, which featured a 16-minute speech and roughly 16 minutes of questions from the media.

“I know it’s a big event with as many media members that are here today,” he deadpanned. “Obviously they thought there was a free meal that went along with the press conference.”

Later, after some kind words about the program and Williams, Self got into his own career. He talked about how he told his new team the night before that he was a heady player who took charges and did the little things to help the team win and he asked them, ‘What does that really mean?’

“And I think it was (Keith) Langford who said, ‘Can’t play,’” Self shared. “Which is basically true.”

Fresh off of a successful 3-year stint at Illinois, Self talked a lot about the Illini program and about Williams during his first news conference in Lawrence.

And while the sentiments he had for both came across as genuine, the one thing that came through even more clearly was his admiration for Kansas.

“When you’re at Oral Roberts and you lose 18 in a row your first year, you don’t speak publicly about I’m going to coach at Kansas someday,” he joked of that initial rough stretch in his head coaching career. “But deep in my heart, once you’ve been here, you know what it’s like.”

Self went on to call the position he had just accepted, “the most prestigious chair in all of college basketball.”

“Nobody picks the timing,” he said. “And certainly I didn’t pick this. It was a difficult decision to leave (Illinois). … This is a once-in-a-lifetime opportunity.”

Self said then that Kansas fans had been “spoiled” by the job Williams did while also adding that he was excited to try to live up to that standard.

“I’ve always thought how cool would it be to office on Naismith Drive,” Self said that day. “And now it actually gets to happen.” 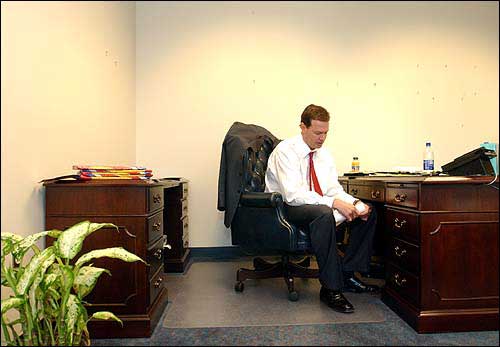 Greeted by an empty desk and blank walls, Bill Self opens a piece of mail in his new office. Self, who was hired as Kansas University's new men's basketball coach, moved Monday into Roy Williams' old office. by Thad Allender/Journal-World Photo

Love the article, and I well remember Self's comment about the chair already feeling hot.

I think most of us thought he was a great hire, but not many thought he'd be THIS good.

I think the only misstep (sort of) was his comment about Naismith being a tough act to follow, given that Naismith had a losing record, but of course I know why he said it.

I remember one of the columnists (Chuck Woodling?) for the Journal World writing when the position first came open that there was only one coach to go after and that was Bill Self, because Bill had been at KU and because Bill Self's Illinois team was built to win and had demonstrated it in manhandling Roy's KU team in the NCAA's. I didn't really know Bill Self at the time, but I remembered that column and so I was glad that KU apparently paid attention. If you can't beat them, hire them!

Those pics! Before he found Muncher's Donuts and started getting free Margaritas at that truly crappy mexican place on 6th. The worst mexican food ever made.

"We good?". Hell no, this stuff sucks. But bring me another watered down Margarita.

Salty Iguana? I've only had it a couple of times and found it very underwhelming as well.

The KU basketball program, at the time Self took over, was in its proverbial state of chaos, begun when Larry Brown left KU twice after winning the '88 national championship. I was at the stadium two years prior when Roy Williams told us, "I'm stayin." And then he wasn't. I remember W.H.B. playing George Harrison's "All things must pass," after it was confirmed that Uncle Roy was on his way to North Carolina. Albeit, it's a great piece of music, it was also a merciless dig to KU fans.

HCBS has ended that chain of tumult and brought 17 years of stability to the program, not to mention great players, a national championship and all the league titles. Thanks, coach. (Looking eagerly looking forward to your next "Self-perspective" video.)

In fairness, some of the instability surrounding Williams' departure to North Carolina had to do with that d!ckhead AD Al Bohl, aka "The Crushed Dove".

Roy had his own reasons for leaving, allegedly because of family concerns. I do not blame him, and I hope he comes back with his team to AFH to play the Jayhawks before he retires. We owe each other a great deal. But from a fan's perspective, it was not a fun time.

I remember watching that presser on Cable 6 back when I lived in Lawrence. At the time I was 16, and I remember just being relieved to have a coach again.

Looking back, I'd say Self's tenure has seen dreams come true, with three Final Fours and a national title. But it's also seen hopes and dreams dashed with several inexcusable NCAA Tournament losses. And of course, this past year is in a class all by itself, with the Tournament cancelled because everyone was freaking out about a virus.

Roy Williams didn't bring a national title to Kansas, and he didn't take KU to the Tournament every year that he was here and that the Tournament was held (although Williams has the excuse of KU being banned from the 1989 Tournament because of the indiscretions of Larry Brown). But Williams also never suffered a Round of 64 loss while at KU, and he has more Final Fours at Kansas alone (4) than Self has (3).

I think it's safe to say after 17 seasons that Bill Self is neither an upgrade nor a downgrade from Roy Williams. I'd call it an even trade.

I'd say upgrade. And I know that Roy has won more titles at UNC, but I really like where KU is now and where we seem to be headed compared to UNC and Roy. Roy needs to retire gracefully and let UNC ruin their program without him.

Coach Self has brought a B1G defensive toughness to our program that we lacked in the past. Hope he stays a long time.

Bill exited Flat Champaign for Hilly Lawrence, must have been a tough decision. Why?

Bill had recruited an Illinois Roster, that included the "3 headed" monster of Luther Head, Dee Brown, and Deron Williams. Plus, Illinois had a verbal commitment from Bronx Big Man Charlie Villaneuva.