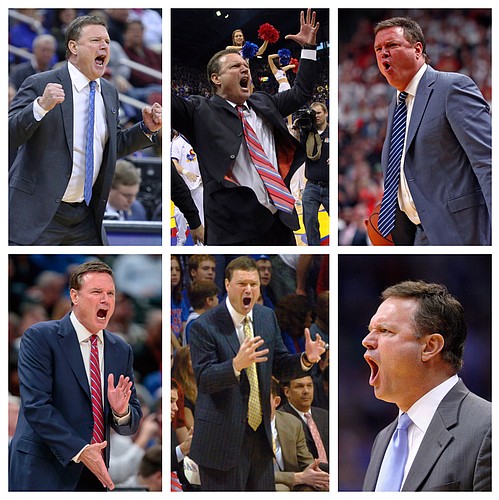 And then there were four. And, go figure, the four teams still standing in our Self Madness bracket are the four top seeds, three Final Four teams and this season’s squad, which would’ve entered March Madness as the No. 1 overall seed and the favorite to win it all.

The Round 2 voting was a little more interesting and entertaining than the Sweet 16, but all of the outcomes were still pretty decisive.

Nearly 4,500 votes were cast in the second round of the Self Madness bracket and not one of them went to the 2006-07 team that reached the Elite Eight and lost to UCLA.

If you think about it, it makes sense. Not only were most of those players on the 2007-08 roster returning from the ’06-’07 team with another year of experience, but they also won it all and were the class of the first and only Final Four to feature all four No. 1 seeds.

Julian Wright and a slightly different starting lineup was the major difference between the two teams. But Sherron Collins and Darrell Arthur as sophomores instead of freshmen, along with the emergence of Darnell Jackson in a starting role, also made that 2008 team so much tougher than the crazy-good group that came before it.

The 4-5 matchup between 2011-12 and 2009-10 was the closest of the second round, with T-Rob, Tyshawn and the gang topping senior Sherron Collins and junior Cole Aldrich with 61% of the vote.

The 2017-18 Final Four team led by Devonte’ Graham and company easily reached the Self Madness semis by taking their matchup with 69% of the vote against the Morris twins and the 2010-11 team.

No surprise there, given how strongly people felt about the current squad and how the season ended, but, if that were played in real life, that would be an absolute battle.

Here’s a quick look at those matchups and the bracket to vote in. If you haven’t already, be sure to enter to win the $500 prize from Truity Credit Union.

Who could ever forget Thomas Robinson’s monster junior season, filled with double-doubles (he averaged 17.7 points and 11.8 rebounds per game) and wild finishes? Or his running mate, Tyshawn Taylor (16.6 ppg), whose speed, toughness and play-making ability helped lead this team all the way to the national title game against Kentucky in New Orleans. That dynamic duo took the Jayhawks on a wild ride through the NCAA Tournament, that featured KU barely surviving Round 2 against Purdue and intense battles with North Carolina State, North Carolina and Ohio State in the three rounds that followed. Joined in the starting lineup by Elijah Johnson, Travis Releford and swat king Jeff Withey, these Jayhawks were one of Self’s thinnest teams — sharp-shooter Conner Teahan and electric forward Kevin Young were the only other two who played consistent minutes — but also one of the toughest. Never was that more evident than in the final Border War game with Missouri at Allen Fieldhouse, where Kansas came back from 19 points down to send off their rival to the SEC in dramatic fashion late in the season.

Arguably the best offensive team Self has ever coached at KU, the 2017-18 Jayhawks embraced all the aesthetically captivating aspects of living that four-guard life. KU surrounded 7-foot sophomore center Udoka Azubuike (13 points per game, 77% field goal percentage) with sharpshooting senior guards Devonte’ Graham (17.3 points, 40.6% on 3-pointers) and Svi Mykhailiuk (14.6 points, 44.4% 3-pointers), as well as Malik Newman (14.2 points, 41.5% 3-pointers) and Lagerald Vick (12.1 points, 37.3% 3-pointers). With a virtually unstoppable center in Azubuike, and always-confident floor-stretching guards around him, KU shot 49.2% from the floor overall, went 391-for-974 on 3-pointers (40.1%) and put up 81.4 points per game en route to the program’s 14th straight Big 12 title and a run to the Final Four. A No. 1 seed in the Midwest in 2018, the Jayhawks, led by consensus All-American Graham, went through Penn, Seton Hall, Clemson and Duke before meeting their match against eventual champion Villanova in San Antonio.