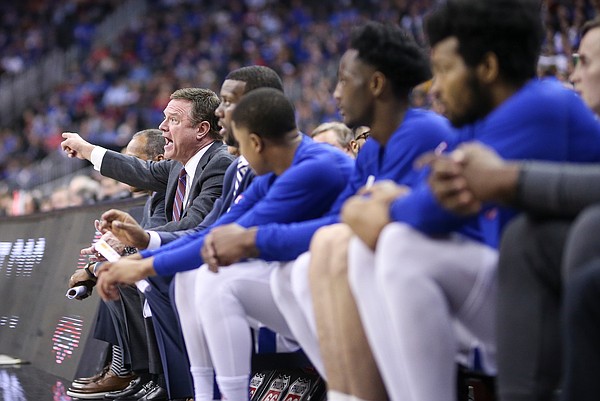 When it comes to covering the Kansas basketball program, there are few things more fun than taking a look at all of the different lineups available to KU coach Bill Self before another season of Jayhawk basketball.

Most years, because of the depth and talent lining the Kansas locker room, this exercise is full of options and new ways to build a half dozen different lineups.

And this year is certainly no exception. In fact, this year might feature the most flexible roster in recent memory.

“You know, we could be really big,” Self recently to the Journal-World. “We could play bully ball, or I think that we could put a team on the court that’s small enough that you could play kind of the way we played the last couple years.”

And while we’ll take a look at a few of those options in a minute, the one thing that jumps out to me that’s even more impressive than Self’s ability to create different lineups is how much versatility he has with plugging several of his players into different positions.

That, by itself, unlocks the opportunity to turn two or three different lineup options into eight or nine.

The biggest trait that creates that reality is length. And although newcomers like Tristan Enaruna, Jalen Wilson and Christian Braun all bring good length — and, therefore versatility — to the program, Self said targeting length on the recruiting trail was not exactly his primary focus.

“We were thinking shooting as much as anything,” Self said. “But length is obviously a factor, too. I think we were in a mode to get the best players that we possibly could at that point in time. But the reality of it is, when you look at the best players out there, obviously length is a factor in getting the best.

“Even though we didn’t say, ‘We have to have length,’ that was one of the things we got.”

Because of that, and because the Jayhawks have so much depth at multiple positions this season, the combinations of lineup possibilities are virtually endless.

With the exception of point guard (for the most part) and center (because no one in college basketball brings what Udoka Azubuike brings to the floor), the Jayhawks can plug and play all kinds of players at the three other positions, while also having options at the point and even at center depending on what kinds of looks they want to give opponents.

Here’s a quick glance at some of my favorite potential lineups the 2019-20 Jayhawks could — could — use at different points during the upcoming season.

You’re going to have a hard time talking me out of believing this is KU’s best five to open the season. Experience, size, athleticism and two anchors, in Dotson at point and Azubuike at center, are the reason many have KU ranked among the top two or three teams in the country heading into 2019-20.

You’ve heard the chatter before, about how KU’s second five could compete for a spot in the top half of the Big 12. And while that’s not always true, it certainly appears to be this season. In Lightfoot and McCormack, you’ve got experienced players who have started multiple games at KU in their careers. Add to that the veteran presence provided by Moss and Garrett and the scoring and athleticism of Wilson and you’re looking at a pretty stout lineup.

Oh, what I would give to see De Sousa, McCormack and Azubuike on the floor together even just a few times this season. It’s going to take a monster opponent — which I’m not sure actually exists — and even then it might not be in KU’s best interest to roll this way exactly. But putting that trio out there with Dotson and Agbaji could be fun. Going with Garrett, who can play point, and Wilson, a versatile wing player, merely maximizes KU’s size at each spot in a realistic way.

What’s the opposite of having those three monsters on the floor like in the lineup before? Going small. Even KU’s “small” lineup isn’t actually that small. It just takes their biggest player off the floor and plugs Garrett into the 4, where he has played in the past and where Josh Jackson and Svi Mykhailiuk before him each had success as well. But there’s nothing small about Agbaji and Moss. Putting them out there together, though, gives KU its best shooting lineup, and that tends to be called a small ball look by some people.

The elder statesmen of the roster make a pretty intriguing mix. With Garrett, Moss and Lightfoot in the 1 through 3 spots, you’re giving up some ball handling and athleticism. So we probably won’t see this at all this season. But if you’re looking to get the most experienced players on the floor together at the same time, this is your group.

This one’s fun. No one’s ever going to call Wilson a center, but I dare you to tell him he can’t play there — especially in a lineup like this built to fly up and down the floor, making traditional position assignments irrelevant. Dotson, Agbaji, Enaruna and Garrett can all get up and down the floor with him and, in this lineup, you wouldn’t have to worry much about who was handling the ball or where he had it. In fact, as fast as this group could be, you might be looking at no more than two or three dribbles per player per trip down the floor. Like I said, fun.

The one subtle thing that jumped out at me during Dotson’s freshman season was how good of a 3-point shooter he was when he had time to catch, square, load and shoot. So plug him into the lineup with the best 3-point shooters and see how things go. Freshman Braun, who, at 6-7, absolutely can play the 4 if needed, would definitely be in this lineup. His stroke is so smooth, and he has range and often finds nothing but net with his jumper. Wilson’s another guy capable of getting hot from anywhere, and we already know that Moss was brought in for his 3-point shooting ability and that Agbaji has been working to improve his already-solid jumper all offseason. Let it fly with this group.

So what you are pretty much saying is that, from a overall depth chart standpoint:

1] Dok and David at Center.

2] Silvio and Mitch at Power Forward.

3] Devon and Marcus at Point Guard.

4] Ochai and Isaiah at Shooting Guard.

5] Jalen and Tristan at the Three Guard. [Behind Marcus, of course]

6] Christian as kind of a wild card and Dejaun as a red shirt.

Kansas practice scrimmages this season ought to be worth the price of admission!!!

Pretty much. And I'm glad you enjoyed it. The reality, though, is that you can really plug a bunch of guys into even more positions than you listed above.

For example, McCormack, Braun, Wilson and Garrett all could play the 4 if needed.

I've never seen so much total depth and positional flexibility on one team. Should be fun to watch.

You have Garrett in both your starting five and second five.

He basically has Garrett in everything. I like the kid but he is a total liability on offense and that should limit his playing time (probably won't but it should).

Marcus' offense/shooting improved a lot as the season progressed last year. Regardless of whether that's the case or not, Marcus has played a lot because of all the non-scoring things he does.

I'm only seeing things once, Joe. Maybe it was a glitch and it's fixed?!?

Yeah. If you had to go with a second five, he'd be the second PG so I included him in both... I can't see any way Garrett's not starting so he's got to be in the first lineup. But if you had to pull him out of that, you could plug Moss in there and still be pretty solid.

Good article overall, but your response makes no sense. If you can include a player in both the first and second five, it becomes meaningless. Why not include two players in both teams? Or four?

Why not include Paul Peirce in both the first and second teams in 1997?

The issue of the second team being able to compete with other power-5 conference first teams can't include players from the first team. It's player 6-10, not some of those and also some of the 1-5 players.

As much as they'd love to get him out there, Dajuan Harris won't play this season. He's redshirting and will enter 2020-21 with four years of eligibility remaining and a boat load of valuable experience in the program...

The caveat being no one gets hurt, otherwise with McBride gone, it may be necessary for the red shirt to go on next year. Just a thought.

I'm pretty certain he's redshirting because he needs to get his credits in order/finished as he's likely a partial qualifier. So there is little to no chance of him playing this year, just like BMac and Jamari.

Is this more than speculation?

It's more than speculation but not anything that KU has announced. I'm quite certain he was not yet eligible when he signed this summer. Self said as much in interviews around that time. You'll note he's not in the boot camp photos and partial qualifiers aren't allowed to practice first semester. It's an academic redshirt. Do the math and it all adds up.

Dajuan won't play this year. His is an academic redshirt, which is different than the initial plan with Ochai a year ago.

NIce to see, and interesting you put Silvio and Lightfoot at the 3G spot as it were in two different situations. IMO, an NBA lineup like this is where we should be.

How about 'super bull baller' team? Dok, Silvio, DMac, Tristan, JWill - would be a fun team to watch. Not that we will ever see it..

I hate to think of Silvio or Mitch chasing a 3 on D. Even Dok at the 5 can be a liability on D.

you're being too rational

I pray to god every day this team stays healthy.

Sorry Tony. I suspect we worship different Gods and intended no disrespect to the one you pray to. BTW, my God is not case sensitive so feel free to spell it anyway you like.