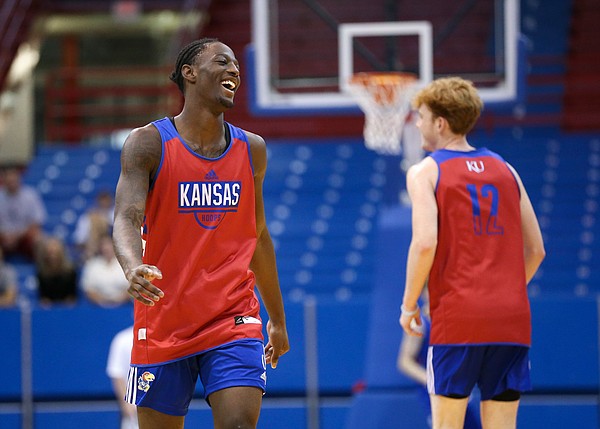 Kansas guard Marcus Garrett (0) has a laugh after an attempted dunk by Kansas forward Mitch Lightfoot went off the back iron during a scrimmage on Tuesday, June 11, 2019 at Allen Fieldhouse. by Nick Krug

But don’t for a second let that lead you to believe the Jayhawks are in bad shape at point guard moving forward.

For one, they still have Devon Dotson, who has only gotten better this offseason and proved during his freshman year that he was capable of playing darn near the entire game if needed.

Beyond that, Dotson is an all-Big 12 guard who could be in the mix for player of the year and a future pro. That’s always a good place to start when talking about the player that makes your team go.

In a perfect world, Dotson would get some rest throughout the regular season so that he’s as fresh as possible when the games really start to count.

And the way the KU roster is constructed, this could be about as close to a perfect world as you’re going to see. Translation: With all of that size and depth that can be utilized to wear opponents down, the Jayhawks may be able to build leads big enough to keep Dotson from having the play the final five or six minutes of at least a handful of games.

Add to that the two or three minutes here and there that he’ll get to rest during the normal flow of the games — Dotson averaged 32.4 minutes per game a season ago — and you’re looking at a sophomore point guard who is poised to play closer to 30 minutes a game this season than 40.

That’s good for both Dotson and the team, long term, and it should be more than doable.

But what about those games when Dotson encounters early foul trouble and has to sit? Who plays point for the Jayhawks then?

A few weeks ago, the automatic answer to that question in the eyes of most Kansas fans likely would have been McBride.

But in actuality, it might really have been Marcus Garrett all along.

Here’s why and how.

Not only has Garrett become one of the best initiators of KU’s offense on the roster during the past year or so, but he also has played the position before.

Why this works this time around is because of the overall depth at Garrett’s primary position.

With Ochai Agbaji, Isaiah Moss, Jalen Wilson, Christian Braun and Tristan Enaruna all capable of playing that third guard spot, plugging Garrett in there is not nearly as crucial this season as it has been in years past.

What’s more at least two of those players mentioned above also can slide in and play Garrett’s role at the 4, if and when the Jayhawks elect to play small during the 2019-20 season.

Garrett at the point is not a long term fix for the Jayhawks. But he is comfortable with the ball in his hands, he can guard opposing point guards and as long as Dotson stays healthy he’ll only need to play it for a short time each game if at all.

There is another point guard on KU’s roster, and his long-term outlook is sky high, but the plan is still for freshman Dajuan Harris to redshirt the 2019-20 season.

Losing McBride isn't devastating but when Garrett has played PG he has shown a real lack of vision and the offense tends to stagnate. McBride at least had the promise of being an effective shooter while Garrett has no history of being any kind of threat beyond a layup.

Garrett is easily the best defender on the KU squad. That is real value.

I still don't understand the McBride exit. Surely, he didn't think he'd overtake Dotson for starting point guard? I think there's more to the story than what's being said.