Darrell Stuckey one of a kind among KU football greats 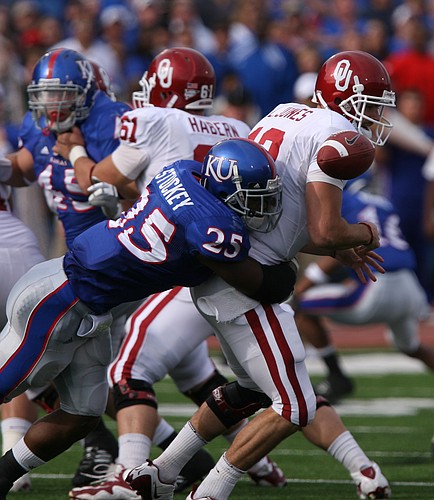 Kansas safety Darrell Stuckey forces Oklahoma quarterback Landry Jones to fumble during the second quarter. The ball was returned to the Sooners because of a penalty. by Nick Krug

There were dozens of Kansas football players who embodied everything former KU coach Mark Mangino was about as a football coach.

But few of them did it with the likable blend of character, class, passion and dogged pursuit of safety Darrell Stuckey.

On Thursday, KU announced that Stuckey would be added to the school’s Ring of Honor at David Booth Kansas Memorial Stadium during a ceremony on Oct. 26, when the Jayhawks welcome Texas Tech to town for homecoming.

In two career games against the Red Raiders, Stuckey racked up 12 tackles, including one for loss and a sack. Too bad he won’t be playing.

There’s no doubt that he still could, but Stuckey’s adult life always has been rich with things beyond football.

That’s not by chance, but by design, and it is the foundation of the life Stuckey has built for himself with the help of friends, family, teammates, coaches and so many others.

You see, Stuckey’s is the type of personality you just want to be around. And it doesn’t matter where. Sporting events? Fine. Church? You bet. Dinner? Absolutely. The next pump over at the gas station? I bet you’d remember the moment.

Let me share with you a little glimpse into the Renaissance world of Darrell Stuckey.

Instead, Stuckey, the former San Diego Chargers pro bowler who recently retired from the NFL, had pictures on his phone of blueprints and designs for the home he was building and shared all of them with the excitement and enthusiasm you might expect after a big hit or victory.

A one-time NFL Man of the Year nominee who received numerous college honors (including 2010 Big 12 Conference Sportsperson of the Year), spent five seasons as the Chargers’ special teams captain and was a fan favorite in San Diego – the city and the franchise — Stuckey’s life has always been about building up others and empowering them to be their best – particularly children.

Don’t get me wrong, he did his share of taking guys down on the football field. Never was there a better example of this than during the 2008 season, when Stuckey raced the length of the field to catch a Louisiana Tech player from behind to preserve a shutout in a game the Jayhawks won 29-0.

During his Kansas career, the local prospect from nearby Washington High in Kansas City, Kan., started 42 of 45 games, finished second among KU defensive backs in career tackles, with 295, and 10th on KU’s all-time interception list with eight.

As a pro, the fourth-round pick in the 2010 NFL draft racked up 94 tackles, forced four fumbles, recovered four more and scored one touchdown while earning one trip to the Pro Bowl (2014) and playing in two playoff games.

He has hosted dozens of free football camps and clinics for young athletes in the area, runs a website — Living4One.com — designed to both interact with his fans and fellow humans and inspire the kind of positive acts that benefit all corners of society.

If the Ring of Honor were solely about character, Stuckey would have been up there the minute he graduated. Heck, his teammates probably would have sprinted up the stadium steps to write his name up there themselves.

In the news release announcing his inclusion, the former Jayhawk who continues to make himself visible and available to the program and the university said he was “humbled to be honored alongside those who came before me and those who are yet to be honored.”

That’s a nice sentiment and needed to be said. But it’s KU football that should be humbled and honored to call Stuckey one of its own and so clearly is.

I remember the LATech play but even more, Stuckey is the play where he caught boogerboy from behind at midfield in Arrowhead after a 40+ yd run, tomahawk chopped the ball out of his hand and then recovered the fumble to boot. I think he also had an INT and nearly 2 to keep us in the game before it was won by Reesing to Meier. Classic.

It would be nice to have the video of that play vs. LA Tech on this article. There is likely video of it out there, though my Google search kept finding a YouTube video that was removed.